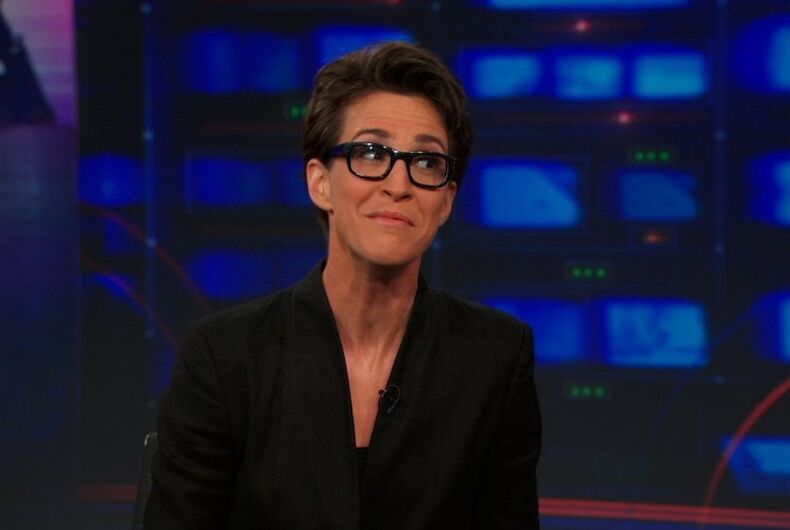 Senate Republicans are opposing Neera Tanden, President Joe Biden’s nominee for director of the Office of Management and Budget (OMB), because of tweets she sent that they believe are too mean.

Out MSNBC host Rachel Maddow couldn’t let that stand: how could people who supported former U.S. Ambassador to Germany Richard Grenell suddenly decide that mean tweets are disqualifying for holding an administration position?

In a segment on her show last night, Maddow discussed Grenell’s “very public habit of tweeting mean and frequently sexist things about the Obamas, about their kids, also about Vice President Joe Biden and prominent Democrats.”

On the screen, she showed some of the text of his old tweets, including “Do you think Callista’s hair snaps on” (about former Speaker Newt Gingrich’s wife) and “Did you notice that while Michelle Obama is working out on the Biggest Loser she is sweating on the East Room’s carpet?”

“That was kind of his level of insults, insulting people’s looks and their weight, attacking their families, particular venom for women in the public eye, a real nice guy,” Maddow explained.

She then pointed out that, while he was asked about those tweets during his Senate confirmation hearing in 2017, he still got 56 votes to confirm him.

But now Senate moderates like Sen. Susan Collins (R-ME) and Sen. Joe Manchin (D-WV) are turning on Tanden because of her tweets. Collins said that Tanden doesn’t have “the temperament to lead this critical agency” and Manchin called out her “partisan statements.”

“It’s a peculiar decision on the part of those senators, given that those senators had absolutely no problem supporting someone with a hyperpartisan Twitter warring history,” Maddow said, noting that both Collins and Manchin voted to confirm Grenell in 2017.

But one of Tanden’s “mean tweets” involved calling Collins “the worst.”

“Tanden’s nomination to lead OMB is hanging by a thread tonight because of the absolutely outrageous and overt double standard to which she is being subjected,” Maddow concluded.

On Twitter, other people are noting that Republican outrage over mean tweets is fairly selective.

It’s really beyond parody that the entire Republican Party could vote against Senate confirmation bc of tweets after four years of backing up Trump. Just bottomless hypocrisy.

Sen. Susan Collins refuses to co-sponsor Equality Act. Will she stop it from passing?