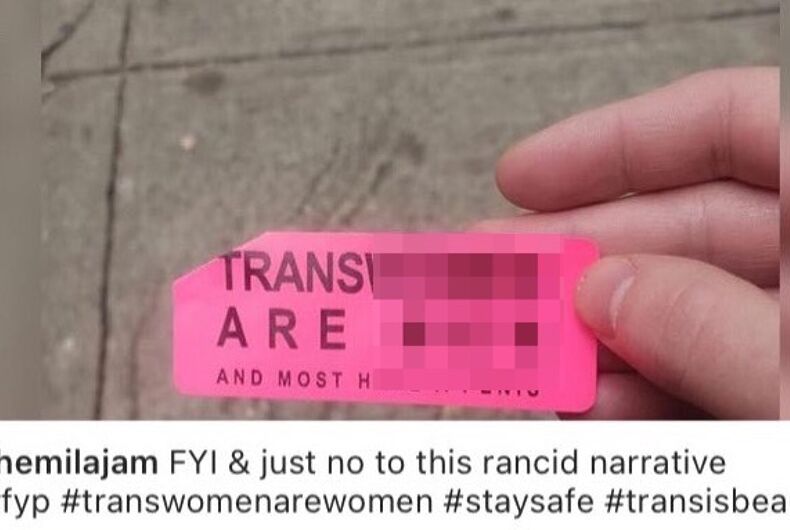 Two women were posting a vulgar sticker all over the streets of Manhattan.Photo: Screenshot

One of the men filmed the encounter with the trans-exclusionary radical feminists (TERFs) and it quickly made national news.

Simon Chartrand, a transgender man, can be heard shouting condemnation of the women’s bigotry as they continue walking down the street.

“You know being transphobic kills people? You want to kill innocent people with your hatred?” he yells in the video.

The stickers said, “Transwomen [sic] are men and most have a penis.”

The couple removed all of the stickers they could find before posting about the incident on social media. The news quickly went viral as New York City politicians and residents responded to the incident with their own condemnation of the bigoted women after out city council candidate Marti Gould Cummings tweeted about it.

“Transphobia has no place in District 7 or NYC,” they tweeted.

This is bigotry that inflicts pain & violence on transgender New Yorkers. We reject and condemn this hateful act. https://t.co/Bl7dMpVczP

“This is disgusting and dangerous,” New York City Council member Mark D. Levine tweeted. He ended with the hashtag “#TransWomenAreWomen.”

This is disgusting and dangerous. Thank you @themilajam for sounding the alarm. #TransWomenareWomen.

Chasten Buttigieg sends a sweet message to his quarantined husband