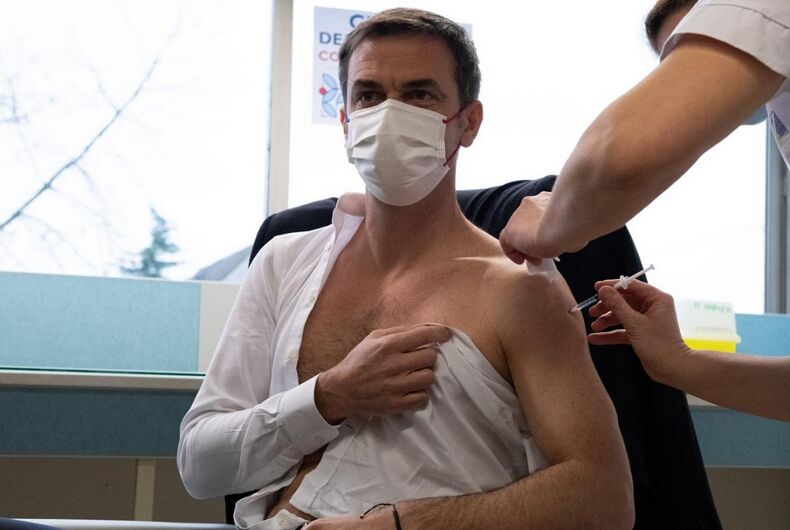 France’s Health Minister just got the COVID-19 vaccine in a televised moment, and French people are realizing that their top doctor is… uh… rather dishy.

France has been struggling to vaccinate its population, moving at about a quarter the speed of the U.S. Only about 3% of the French population has gotten at least one dose of a COVID-19 vaccine, far behind the U.S.’s 13%, according to today’s statistics from each country’s government.

France’s biggest hurdle to vaccinating its population is currently procurement issues. But soon France’s longstanding anti-vaccine streak is expected to make reaching the herd immunity threshold more difficult. In a recent survey, only 44% of French people said that they would get the vaccine, one of the lowest rates in the world.

So Health Minister Olivier Véran held a press event and got vaccinated on camera today. But instead of rolling up his sleeve or showing up in a short-sleeve shirt like his American counterparts have been doing, Véran gave France an eyeful.

“Vaccinated,” he tweeted with a picture of him getting the AstraZeneca vaccine, which medical professionals can get in France at the moment even if they’re under 50. Véran is 40-years-old.

But others were pointing out something else entirely; the good doctor looks like he hit the gym before getting the shot.

“A rather good-looking guy,” said one commenter.

“All that, just to show off his biceps,” said another.

“To your health, hot boy,” one wrote, using an Arabic expression and “bg” or “beau gosse,” common in French internet slang.

“Well well well, my dear colleague, you have some nice deltoids,” replied a retired doctor.

“Um… our health minister is not bad,” wrote someone, using a blushing emoji.

This is now an Olivier Véran stan account, deal with it. https://t.co/A3tOUtLmhN

Despite conspiracy theorists’ claims that the photo of Véran getting his jab was all an elaborate hoax (there is no evidence to back this claim), video of the event shows that, other than all the cameras, it was just a pretty routine visit to a nurse’s office.