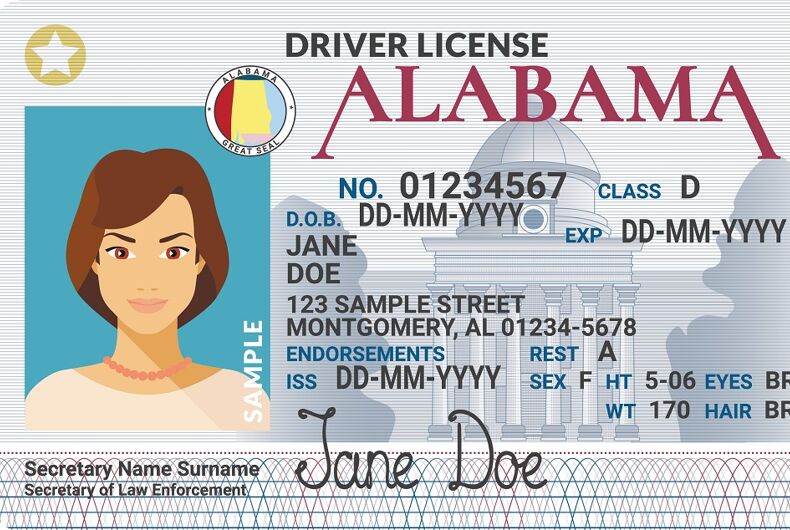 A federal judge has deemed a law in Alabama, that only allowing transgender people who have undergone gender-affirming surgery to correct the gender marker on their driver licenses is unconstitutional.

The ruling in Corbitt v. Taylor was issued on January 15 from the Middle District Court of Alabama, which is encompassed by the 11th Federal Circuit. It concludes over three years of litigation in the matter.

Related: This state legislature barred Pride flags from the Capitol. The Lt. Governor will fly it anyway.

Three transgender woman in the state, Darcy Corbitt, Destiny Clark, and an unnamed Jane Doe, were denied driver’s licenses with accurate gender markers. Instead, they were issued licenses that showed their sex assigned at birth. They decided to sue, with the assistance of the American Civil Liberties Union (ACLU), against Hal Taylor, the Secretary of the Alabama Law Enforcement Agency.

Gabriel Arkles, senior counsel at the Transgender Legal Defense and Education Fund — and a litigator for the plaintiffs — explained, “The policy for driver’s licenses, which is what we challenged with this lawsuit, requires that people either submit an amended birth certificate or submit proof of having had what they call ‘complete surgery,’ which Alabama interprets to mean both ‘genital surgery and top surgery.'”

Alabama argued in court that maintaining the rule “serves the important government interests in maintaining consistency between the sex designation” and cited the need for law enforcement to have someone’s sex assigned at birth as opposed to their gender as “information related to physical identification.”

Arkles added that to keep the rule, Alabama would “have to have a very good reason for what they’re doing, and here they really did not.”

“By making the content of people’s driver licenses depend on the nature of their genitalia, the policy classifies by sex; under Equal Protection Clause doctrine, it is subject to an intermediate form of heightened scrutiny,” Judge Myron Thompson wrote in his opinion.

“The State’s justifications for the policy fall short not because of the policy’s consequences for transgender Alabamians, but because the government’s interests are insubstantial or were formulated post hoc, and because that policy is inadequately tailored to advancing them.”

Thompson, an appointee of President Jimmy Carter, noted how difficult it can be for trans people to carry around a reminder of their sex assigned at birth as opposed to their gender identity.

“For these plaintiffs, being reminded that they were once identified as a different sex is so painful that they redacted their prior names from exhibits they filed with the court,” he added.

Thompson also directed the state to give new licenses to the three trans women who filed the lawsuit “reflecting that they are women.”

“I know who I am, and finally the state of Alabama will be required to respect me and provide an accurate driver’s license,” Corbitt said in a statement. A spokesperson for the state attorney offered no further statement on behalf of the state other than to express that they intend to appeal.

Fewer than 10 states now require proof of surgery to updating gender identity on DMV-issued licenses and identification, NBC News reports. Movement Advancement Project (MAP) and the National Center for Trans Equality (NCTE) find that two territories and eight states still require proof, while Alabama and several others have unclear rules as of now.

Biden needs to invest in LGBTQ entrepreneurship. We’re adept at carving our own place in the world.