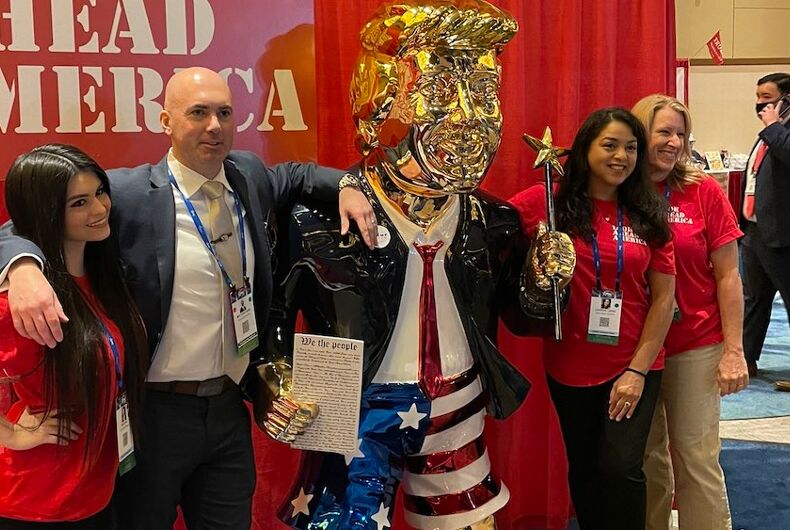 Statue of Donald Trump at the 2021 CPAC conferencePhoto: William Turton via Twitter

The Conservative Political Action Committee (CPAC) conference has traditionally been the annual jamboree for conservatives to air the current thinking in the movement. This year’s conference, which ended in a blaze of logorrheic, nonsensical drivel from Donald Trump, proves that the movement is devoid of ideas or even devotion to a party.

Instead, it’s the cult of Trump.

“The Republican Party is united,” Trump was to tell the crowd, according to prepared remarks. “The only division is between a handful of Washington D.C. establishment political hacks, and everybody else all over the country.”

In short, Trump is positioning himself and his supporters to be the makeup of the party.

There’s no reason to doubt him. The vicious attacks on the few Republicans who voted to impeach Trump for inciting the insurrection last month has scared their peers. Even while Twitter-less, Trump is to be feared for his power to destroy careers.

The conference was always a magnet for fringe types that the Republican establishment kept at arms’ length. In 1992, right-wing columnist Pat Buchanan won the unscientific straw poll as the presidential candidate of choice, even though the incumbent was Republican George W. Bush.

One early signal that the conservative movement was hostage to the most radical elements on the right came 10 years ago when CPAC banned the gay group GOProud from the conference. That was a sign that the movement was more interested in identity than principles, a milepost on the road to Trump.

Over the years, the conference has become increasingly influential, even as it has become ever more radical. What was once a segment of the Republican party is now largely the party itself. In this realm, nothing that Donald Trump did was wrong and The big lie of the stolen election is a tenet of faith.

Moreover, the bulk of the conservative movement and the GOP stand for nothing except whatever Trump wants. It has no foundational principles other than white grievance. In short, the Republican Party is against everything and in favor of nothing. It has exhausted its much vaunted (and overrated) reputation as the party of ideas. All it stands for now is yelling ‘no’ at everybody else.

At the conference, Florida Gov. Rich DeSantis, who is positioning himself for a White House run in 2024, rolled out his vision of the GOP: Anti-“adventurism” abroad, anti-big technology companies, anti-immigration, anti-China and anti-lockdowns.

At the same time, DeSantis made it clear that the GOP establishment — which he is part of, by definition — no longer runs the party. “We will not go back to the days of the failed Republican establishment of yesteryear,” he declared, to thundering applause.

In fact, media interviews with the faithful in attendance underscored the fact they there is little loyalty to the party itself. They only care about what Trump says. They trust only the most radical members of Congress, like Marjorie Taylor Greene, because those politicians are most like Trump. Like DeSantis, they see the party as a whole as untrustworthy.

What does the GOP have to offer as a rebuttal anyway? Its mantra of lower taxes doesn’t resonate as the biggest issue with the CPAC crowd. The Supreme Court is already packed with youthful right-wingers. The party didn’t even bother to create a platform outlining its agenda last year because it has no vision for the future.

Instead, it’s focused on the past. All that matters is Trump and his followers, and all that matters to them is that their privilege in society feels like it’s slipping away from them, and they want to regain it at any cost. They have zero interest in wanting to address any of the issues the country faces. They just want to vent.

Which is what Trump allows them to do. He’s the bully that they need. The perfect image for the party now is the golden Trump statue that’s been a huge hit at CPAC. He has literally become the party’s golden idol.