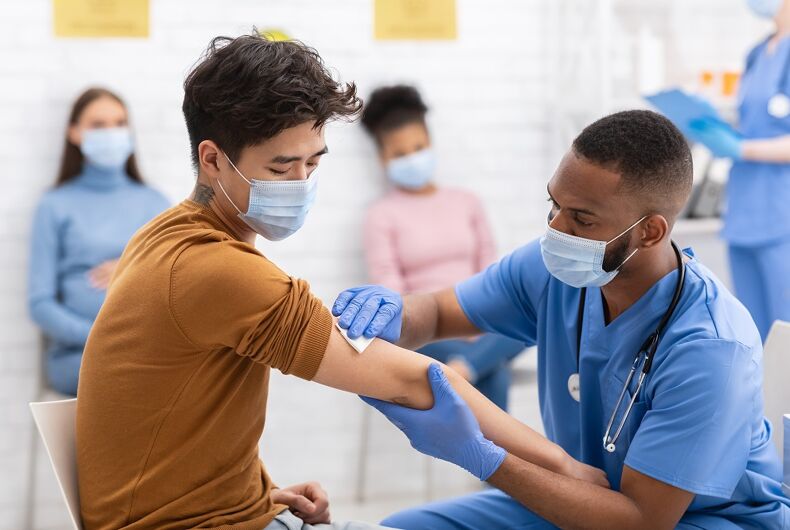 Researchers are finding evidence that the Pfizer/BioNTech and Moderna vaccines for COVID-19 are even more effective at preventing transmission of coronavirus than previously believed.

Studies of patients who have completed the vaccination regimen for either of the currently available vaccines find that they are more protected from the novel coronavirus. Another study finds that a not-yet-released, one-shot vaccine from Johnson  & Johnson is also effective.

Related: FDA approves the first once-a-month injections to treat HIV. They will cost $4000 each.

The first studies of already-vaccinated patients was conducted by Israel’s Ministry of Health. Over 700,000 people were fully inoculated, or received the two dose regimen of either vaccine, and less than one percent ended up being infected with COVID-19.

Out of the less than one percent — 317 individuals, out of 715,425 vaccinated individuals, to be exact — only sixteen required hospitalization.

That means that 0.044 percent of the recipients of the Moderna vaccine or the Pfizer/BioNTech vaccine (with the latter being more commonly used in Israel) contracted the virus, and only 0.00224 percent were hospitalized after getting the vaccine.

The Israeli studies are especially notable as they were conducted throughout December 2020 and encompassed a larger set of individuals in their data than either of the vaccines trial studies included.

Additionally, Johnson & Johnson is close to approaching the U.S. Food and Drug Administration (FDA) for approval to mass produce a newly developed vaccine. They have tested a new candidate for vaccinations that requires only one shot and would use less supplies than either of the other vaccines in mass production.

One of the most helpful signs: “not a single person who got vaccinated, and had illness after four weeks, ended up in the hospital,” Dr. Mathai Mammen, global head of pharmaceutical research and development at Johnson & Johnson, told NBC News.

Johnson & Johnson’s potentially approved vaccine has been tested in those staying in the United States, South Africa, and parts of Central America and was found to have a 66 percent efficacy rate when it came to stopping the transmission of the virus.

“Not a single person who got vaccinated, and had illness after four weeks, ended up in the hospital,” said Dr. Mammen, which “leads me to believe that this vaccine will stop this pandemic.”

Researchers believe that the number of patients protected with their vaccine could be even higher. They hope to prove so from the trial data. The people who contracted the B.1.351 variant of coronavirus, which was first spotted in South Africa, accounted for many of those who got the virus after getting the vaccine.

Here’s why we’re suing the federal government. This is what solidarity looks like.