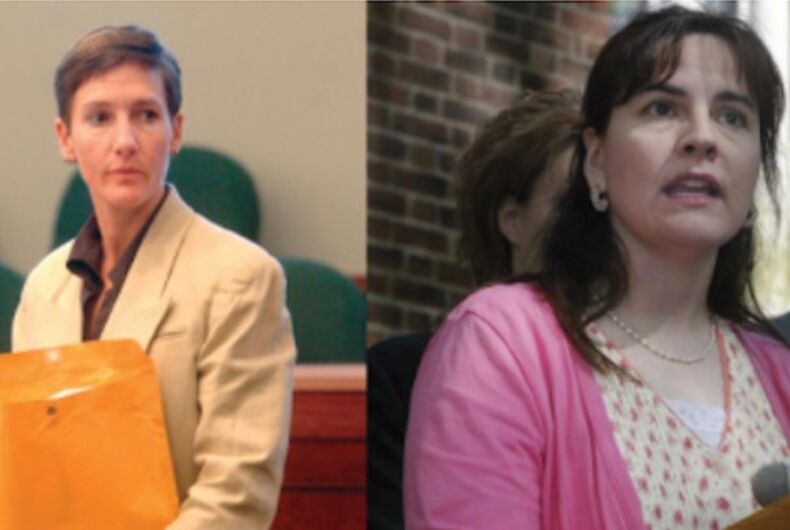 A self-proclaimed ex-lesbian who said she left “the homosexual lifestyle” and who kidnapped her and her partner’s child and fled to Nicaragua for over a decade is now in custody and is awaiting trial.

Lisa Miller, who kidnapped the daughter she had with her ex, Janet Jenkins, in 2010 to go live in a religious community in Central America, is behind bars in Miami after she turned herself in. The daughter, Isabella, is now 18-years-old and is believed to be in Nicaragua.

Related: A man who helped kidnap a lesbian’s daughter blames it all on Obama

“I just want Isabella to know that I love her very much and that I have never stopped loving her,” Jenkins said in a statement this week. “Isabella has a family and support system here who will always welcome her home with open arms.”

In 2000, Jenkins and Miller got a civil union in their home state of Vermont when they first became available. Two years later, Miller gave birth to Isabella with the help of artificial insemination.

The next year, the couple separated and Miller accused Jenkins of sexually abusing their child. Miller also said that she was no longer a lesbian and that she had become a fundamentalist Christian. She tried to deny visitation to Jenkins, arguing that she’s the biological mother and that their civil union gave no parental rights to Jenkins. Jenkins was still awarded visitation by a Vermont court.

So Miller grabbed the kid and moved to Virginia, which didn’t recognize same-sex relationships at the time. Jenkins argued her case to the state’s supreme court, saying that the federal Parental Kidnapping Prevention Act requires Virginia to recognize her parenthood because Vermont did. The court agreed with her in a landmark decision and she was able to get visitation rights.

For years, Miller refused to comply with the visitation order. In 2009, the court in Vermont had had enough of Miller’s refusal to grant visitation and turned custody of Isabella over to Jenkins.

But Miller wouldn’t comply and she – with the help of some local Christians – grabbed her kid and drove to Canada. From there, they flew to Nicaragua to live in a Mennonite community. Miller was indicted in a federal court in 2014 and, in the time since she fled the country, three anti-gay activist conspirators have been convicted on charges related to helping her with the kidnapping.

After years of evading the law, Miller turned herself in at the U.S. Embassy in Managua. She is being held in custody in Florida and will face trial on charges of conspiracy and kidnapping in a federal court in New York, because that’s where she allegedly crossed the border into Canada.

“After kidnapping Isabella more than a decade ago, Lisa Miller has finally been returned from Nicaragua back to the United States,” said Scott McCoy of the Southern Poverty Law Center in a statement. “We expect that she will be prosecuted for kidnapping to the fullest extent of the law.”

The case made national headlines in the 2000s because it highlighted a major problem caused by some states recognizing same-sex relationships while others refused to do so.

What it means to be a true artist-activist