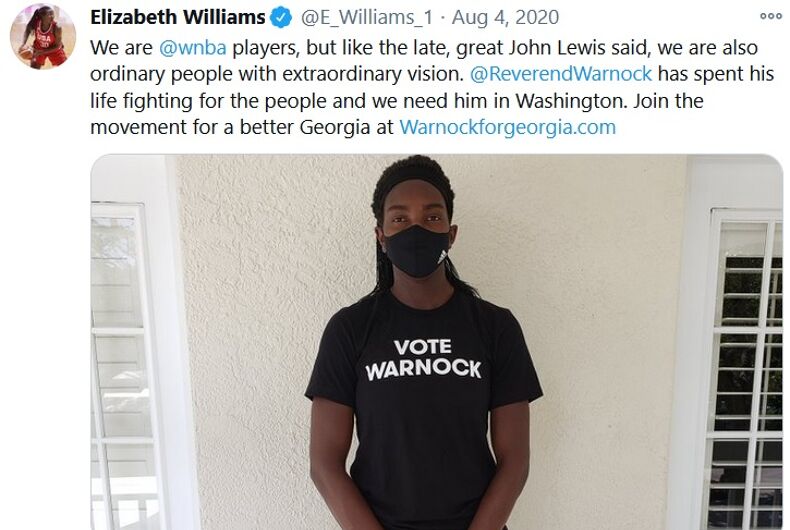 Writer Jemele Hill has kicked off a conversation on social media that has everyone talking.

Hill pointed out that Senator-elect Raphael Warnock (D), who won his special election to be the next U.S. senator from Georgia yesterday, was polling poorly until WNBA players endorsed his campaign. Warnock’s opponent, Sen. Kelly Loeffler (R-GA), is a co-owner of the Atlanta Dream team.

“I don’t know who needs to hear this but Reverend Raphael Warnock was polling at 9% when the Atlanta Dream and WNBA players threw their full support behind him and elevated his national profile. Now he’s Georgia’s first black Senator,” she tweeted.

I don’t know who needs to hear this but Reverend Raphael Warnock was polling at 9% when the Atlanta Dream and WNBA players threw their full support behind him and elevated his national profile. Now he’s Georgia’s first black Senator.

Loeffler came under fire earlier this year for comments she made about the Black Lives Matter movement. She said, among other things, that the anti-racist movement “called for the removal of Jesus from churches and the disruption of the nuclear family structure, harbored anti-Semitic views, and promoted violence and destruction across the country.”

Dream player Elizabeth Williams told ESPN that the plan for the T-shirts came because “for effective change to happen, there has to be policy changes.”

“If we’re going to sit here and talk about wanting justice reform, part of that is making sure that we have officials in office that understand that,” she said.

The WNBA has dedicated this year’s season to Black Lives Matter. Other teams, like the Seattle Storm, also joined the protest, wearing shirts during the season that said “Vote Warnock.”

Sen. Loeffler sent a letter last month to WNBA Commissioner Cathy Engelbert complaining about the decision, saying that the league needs to respect the sensibilities of people who don’t “share the same political views” as the anti-racist movement. The letter also stressed that she owns part of a WNBA team.

Williams told the New York Times that it was Sue Bird, a basketball player who has won three WNBA championships with the Seattle Storm, who came up with the idea to endorse Loeffler’s opponent in the Senate race. Bird is the partner of Megan Rapinoe, the captain who led the U.S. Women’s National Soccer Team to victory at the Women’s World Cup in France last year.

They had the T-shirts made and debuted them last night because the game was going to be broadcast on ESPN 2, and the players plan to wear the T-shirts at future games.

“We can’t really do anything about [Loeffler’s] ownership,” Williams said. “That’s not something we can control. We can control who we vote for.”

We are @wnba players, but like the late, great John Lewis said, we are also ordinary people with extraordinary vision. @ReverendWarnock has spent his life fighting for the people and we need him in Washington. Join the movement for a better Georgia at https://t.co/hC8iF9urak pic.twitter.com/mvN5e9m4oO

While folks gave the basketball players their due, several people highlighted how important Black women were in the special election that decided control of the Senate. From Stacy Abrams’ nonstop push to turn the state blue to the many on-the-ground organizers who made sure Democrats were registered and voted, Black women did the hard work to make sure the GOP didn’t control the chamber.

Black people, largely black women, KEEP coming through for this country. And we KEEP not repaying the lifetimes of debt. I hope these adminstrations do something right.

Folks should never doubt the power of Black Women.

Thank you, @WNBA for not taking one for the team.
The world thanks you.

This is the Seattle Storm. The entire league was united in the fight to push Loeffler out of the Senate. Thanking the 144 women of the league in addition to Stacey Abrams, and the organizers on the ground.