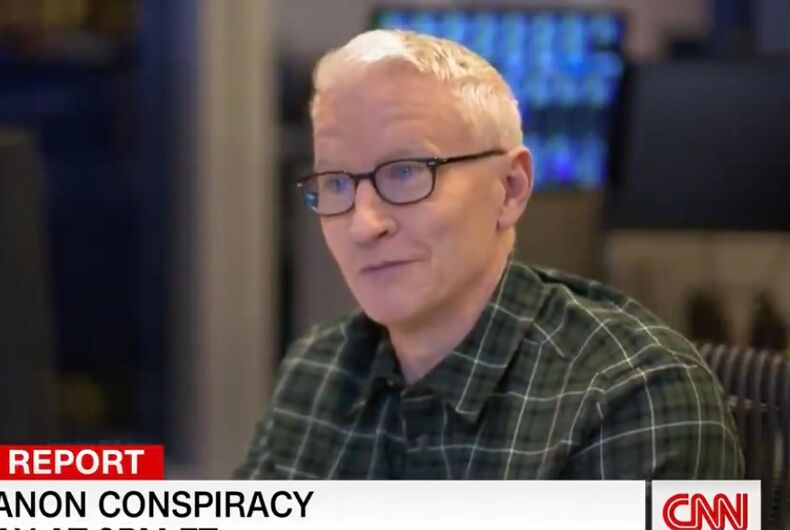 As the cornerstones of the QAnon conspiracy theories fall apart, America seeks to understand what led to so many people falling for a set of far-right beliefs that ultimately fueled debunked election fraud claims and contributed to driving people to storm the U.S. Capitol on January 6.

CNN’s Anderson Cooper sought out to understand some of the people that ended up supporting the massive movement, and seem surprised to learn that he was a key antagonistic figure for believers of the conspiracy.

During a segment of the special report, shared in previews before the full report premiered on January 30, Cooper asked former QAnon believer Jitarth Jadeja: “Did you, at the time, believe that Democrats, high-level Democrats and celebrities were worshipping Satan, drinking the blood of children?”

Jadeja told the out journalist: “Anderson, I thought you did that. And I would like to apologize for that right now. So, I apologize for thinking that you ate babies. But, yeah, 100%.”

Anderson, audibly stumped, asks for clarification, “but you-you actually-you actually believed I was drinking the blood of children? Was it something about me that made you think that?”

Jadeja explained that “Q” had “specifically mentioned” Cooper “very early on… by name.”

Jadeja alludes to the main reason that Cooper is often linked to conspiracies such as these: descends from the prestigious Vanderbilt family tree. “He also talked about, for example, your family…”

“I’m gonna be honest about that, people still talk about that to this day. There were posts about that just four days ago. Some people thought you were a robot,” he adds.

He also says that some of the other tenets he learned as a deep follower of the conspiracy theory was that “QAnon was part of military intelligence,” which was part of the reason QAnon supporters believed that such conspirators had breached the government, and “the people behind him were actually a group of fifth-dimensional, intradimensional, extraterrestrial bipedal bird aliens called Blue Avians.”

Yes. You read that correctly.

Jadeja, an Australian resident, began sharing his story in the fall of 2020 explaining how the QAnon conspiracy had held a spell over him for nearly two years, until one YouTube video started the process of entirely debunking the theories for him. He stopped subscribing to the online cult-ish set of beliefs in June 2019.

“Really, it’s like an existential battle between good and evil. That’s how it’s framed,” he told the Washington Post. “Everyone is very okay with the concept of martial law. And I was part of this. I was so far in it. If Hillary Clinton had been executed publicly, I would have cheered. That bothers me to this day.”

“Every single conspiracy theory you’ve ever heard — including some you’ve never heard — are somehow part of the Q movement,” he explained about its popularity.

When his belief fell apart, he contemplated suicide. “If I didn’t have family that loved me I probably would have committed suicide. It was really a terrible feeling to know that you are this stupid and this wrong.”

Former QAnon believer to @andersoncooper: "I apologize for thinking that you ate babies" pic.twitter.com/IcVIwpYykd

The intradimensional bird aliens is new to me. Blue, huh?

this is an absolutely bananas clip

I have never in my entire life looked at any human being and thought to myself “yep … he eats babies.”

INCLUDING the fictional Hannibal Lecter. He was really weird, I know, but even he only ate adults.

The question in my mind is, how did he come to *NOT* believe this?

If i had a nickel for every time i had to make this apology… https://t.co/lRjo4dynSN

I’ve read that many Q believers begin doubting it once they’re confronted with a conspiracy theory that they themselves personally know to be untrue. Usually due to their schooling and professional background. That doubt cracks the door and let’s more doubt in.

I know someone who believes in Q. In Canada. And I can't shake him from his belief. At one point he was a top-level executive at a multinational corporation – since retired. He's an otherwise intelligent person. It just baffles me.

Haven't seen my baby for a while. I wonder if Anderson Cooper ate him?

The Q Anon special with Anderson Cooper shows why we need to have a greater focus on 1) EDUCATION and 2) MENTAL HEALTH in this country.

Rob Portman is considered pro-LGBTQ. But he’s undercut our rights as much as he supported them.