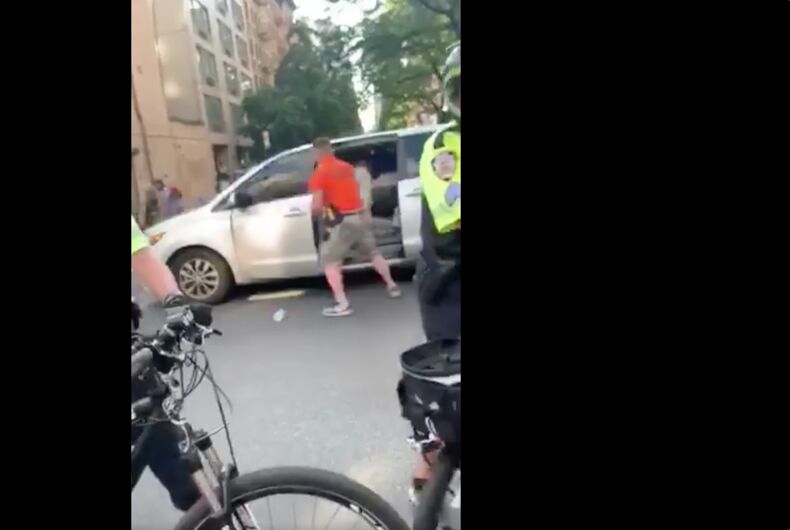 Nikki Stone, a 19-year old trans woman that was seen on camera being pushed into an unmarked van by police during a Black Lives Matter protest, was arrested again on January 6. She was one of eight taken into custody for protesting out in front of the Trump Tower in Manhattan after pro-Trump insurrectionists breached the U.S. Capitol.

In July, when Stone was 18, she was skateboarding down the street as part of a Black Live Matter march when plainclothes officers jumped out and pushed her into an unmarked gray van before driving away. Police later said she was suspected of vandalism.

As other protestors started to react, New York Police Department (NYPD) officers swarmed in, using bicycles as barricades and brandishing pepper spray and batons. The cops pushed citizens back so they could abscond with the young woman. Videos of the ordeal went viral at the height of police brutality protests in the summer of 2020.

The department later claimed that she was “taken into custody… for damaging police cameras during 5 separate criminal incidents in & around City Hall Park.” Further, they claimed to be the aggrieved party in the situation, saying that “the arresting officers were assaulted with rocks & bottles.”

Stone, also known as “Stickers”, was charged with graffiti and criminal mischief, and then released. The method of her arrest earned the NYPD widespread condemnation, especially from members of City Council and Mayor Bill de Blasio.

Demonstrators in front of Trump Tower were in support of the dismissal or end of charges bought against Black Lives Matter protestors, after the “undeniable discrepancies in the response of law enforcement” in comparison to the storming of the Capitol in Washington, D.C.

Protesters wanted to make it known that they believe an attempted coup d’état was being undertaken by the Republican Party and, based on at least one sign, that “Trump Is Guilty” in connection to it.

New Yorkers are taking to the streets tonight to demand that ALL CHARGES against protestors be DROPPED in light of the massive and undeniable discrepancies in the response of law enforcement to BLM and MAGA protestors.

The eight arrests of Black Lives Matter protestors came just after a separate anti-Trump group, Rise and Resist, demonstrated in front of Trump International Hotel in Columbus Circle, Manhattan that same afternoon without any arrests.

The Black Lives Matter protestors were charged with “disorderly conduct” after being in the road directly near the building.

Stone was one of six people to receive a desk appearance ticket, meaning they will be summoned before a criminal court on misdemeanor charges sometime in the future. She also received desk appearance tickets on four additional charges related to graffiti incidents that allegedly took place between October and December.

Meanwhile, almost all of the people that were part of the breaking and entering of the U.S. Capitol building remain at large. Most of the 80-plus arrests within the D.C. area that have taken place since January 6 in connection to the insurrection were due to curfew violations, and not directly to raiding or destroying federal property.

Part of what incited the pro-Trump mob’s actions on the Capitol was a speech delivered just hours prior by Donald Trump, Jr., in which he brought up gender-neutral language as well as transgender women participating in sports as women.

“Thank you for standing up to the bullshit!” Trump Jr. told the crowd.