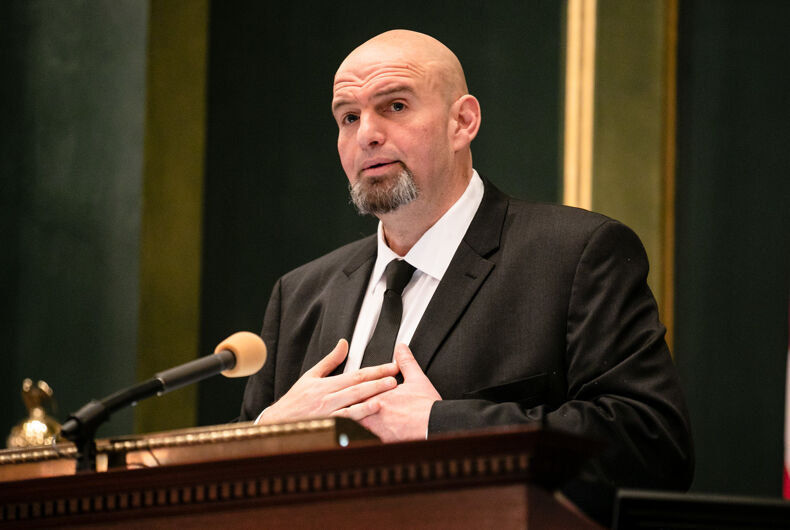 The GOP-controlled Pennsylvania legislature passed a stipulation last year that outlawed the raising of “unauthorized flags” in the state’s Capitol Building in Harrisburg.

But Lt. Governor John Fetterman (D) has flew his Pride flags and weed flags anyway, and he has no intentions to stop.

Fetterman has “hung the pro-legalization green leaf and LGBTQ rights flags from the balcony of his office, which overlooks the state Capitol’s front steps and much of downtown Harrisburg,” NBC News reports. In accordance with the rules agreed upon in the last state budget, state employees staffed in the Capitol quietly removed the flags last week, folded them, and left them in Fetterman’s office.

Fetterman put the flags out again. Until Pennsylvania passes legislation that legalizes marijuana and anti-discrimination protections for LGBTQ people, Fetterman will continue to defy the law, he has stated.

“The GOP collectively shrugged when a couple of its members were photographed down in D.C. on Jan. 6,” Fetterman told NBC News, “but my pride and weed flags are a point of outrage for them?”

As Lieutenant Governor, Fetterman is the President of the Pennsylvania State Senate. Jason Gottesman, spokesperson for the Pennsylvania House’s Majority Leader, Kerry Benninghoff (R) said that the rule was made to “create some uniformity and decorum” for “the most visible building in Harrisburg.” Gottesman’s remarks to NBC specifically mentioned that school groups frequent the building.

The Republicans argue that Governor Tom Wolf agreed to the stipulation before it was added. Still, Fetterman believes it’s a sly move by the GOP targeted at him.

“I was just making a statement. I never in a million years thought that they would actually write a law to ban them,” Fetterman said. “They can’t understand how ridiculous this looks. They’re all about free speech except when it’s speech they don’t like, apparently.

“It’s flattering to be living rent free in their head like this,” he said.

Fetterman also added that the same legislature refused to include provisions for LGBTQ equality protections when they adopted the rule.

So, the PAGOP sent the gay flag police to take mine down today. 🏳️‍🌈

The LG’s office sent the LG to fly them proudly once again.

Equal Protection Under The Law. 🏳️‍🌈

How it started. How it’s going. pic.twitter.com/NLJ5uKt6Yy

I even had to rehang this one. 🙄 pic.twitter.com/NPuADtb1Lt

There was no outlined punishment or reprimand for defying the rule. “It’d be a lot easier for everyone to just comply up front instead of making an issue out of it,” the speaker’s spokesman griped.

Fetterman isn’t concerned. “When I’m back in Harrisburg on Monday, I’m going to hang them back up,” he told The Advocate.

“I’m ashamed of my state, and I’m so sad because the LGBTQ community deserves those protections under the law, no more no less than anyone else,” he continued. “This idea that you’re not embracing the right side of this law is just so wrong… it’s vile and has no place in Pennsylvania or anywhere in the United States.”

“We will just keep fighting for [LGBTQ equality],” Fetterman said, “we won’t stop.”

Fetterman is serving in his first term as Lieutenant Governor after taking office in 2019. For 14 years prior, he was the mayor of the suburban town of Braddock, PA. In that office, he openly defied laws that prevented marriage equality, and performed multiple same-sex marriage ceremonies.

Fetterman opened his home — a former car dealership he and his wife are renovating — to marry multiple same-sex couples beginning in August 2013. Fetterman and at least one other mayor of a neighboring suburb began performing the ceremonies whilst the clerk in one county was issuing marriage licenses. Pennsylvania’s version of the Defense of Marriage Act (DOMA) was in effect, but the clerk was issuing licenses anyway whilst facing challenges in court.

In the meantime, Fetterman wanted to be on the right side of history. He seeks to be there again.

At the beginning of his Lieutenant Governor term, Fetterman criticized a mayor who spontaneously chose not to raise the Pride flag despite the City Council’s approval and the community’s readiness to do so.

“The fact that the mayor of their community wouldn’t raise their flag — I felt like it shouldn’t go unanswered,” Fetterman said of then-Reading mayor Wally Scott. “When the mayor of a city snubs an entire community — when these things happen — this is where I do step in.”

Fetterman ran for the U.S. Senate in the 2016 to challenge Sen. Pat Toomey (R), but lost in the Democrat primary. He has opened an exploratory committee for a U.S. Senate run again in 2022, while Toomey has announced his retirement.

I’ve always seen this about freedom.

Free to be who *you* are and live your truth. Freedom FROM discrimination. 🏳️‍🌈

Freedom to consume a plant without criminality and a lifelong record. 🍃

It’s so fundamentally American, I just don’t understand why the PAGOP despises it so. https://t.co/rHd732MhOE

✅ Yes to a plant already consumed by millions.

And just like that, Pennsylvania is immediately more just, equitable, enriched, and free. 🇺🇸

So, they took them back down again. I’d *much* rather have Pennsylvania go national *for* enacting LGBTQIA+ 🏳️‍🌈 protections and legalizing weed instead of this. https://t.co/az1w42qPKE