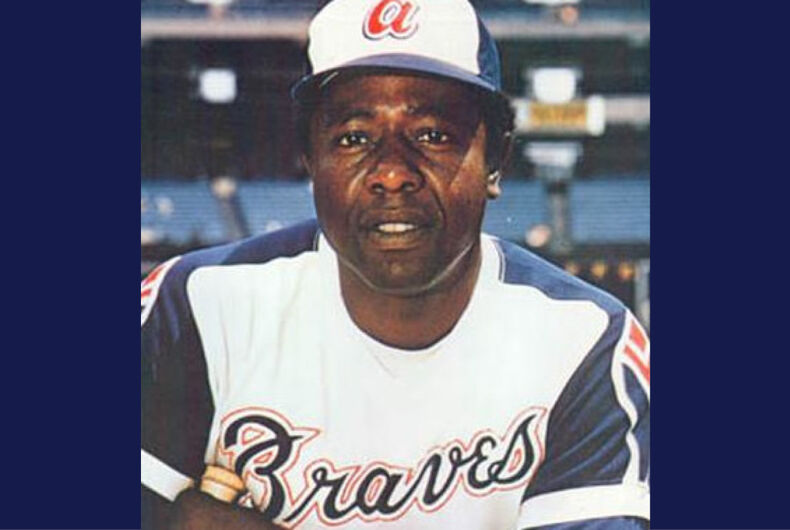 The 1970s saw many historical shifts in America, and 1974 was no exception. But even before the country watched the disastrous end to Richard Nixon’s presidency, there was another histo-cultural moment that seismically changed everything.

It came in Atlanta, at a baseball game.

The town I live in isn’t truly ‘small,’ but it also won’t ever be the top destination for a major league sports franchise either. Which is fine — I’ve grown to enjoy minor league baseball.

But I grew up in Houston, not all that far from the Astrodome, home to the city’s big league ball team Houston Astros. As a result, the first pro game I ever attended was not minor league, but major league baseball.

It was the Astros’ 1974 home opener – a relatively meaningless game against the Los Angeles Dodgers. The Astros were, to be charitable, not very good (epitomizing mediocrity that year, finishing 81-81), but they beat the Dodgers that day. The Dodgers would go to the World Series that year, though.

The Astros’ starting pitcher was Claude Osteen (no relation, so far as I’m aware, to Joel) who spent the majority of his career with the Dodgers and had just come to the Astros in a trade for Jim “Toy Cannon” Wynn.

The Dodgers’ starter was Al Downing, starting on three days’ rest. He had a decent career, including a few trips to the World Series (two with the Yankees prior to 1974) and the relatively rare feat of striking out three batters in one inning on nine pitches.

But the Friday, April 12th game is justifiably forgotten by all except those who attended. It was a game earlier in the week with the Astros that would go down in infamy.

Prior, Downing took the mound on Monday night, before a national audience, rare at the time, because of something that many presumed beforehand might happen.

On Monday night of that week, Hank Aaron of the Atlanta Braves — who died at age 86 yesterday — went into a game against the Astros with a total of 714 home runs for his MLB career, tied with Babe Ruth for the crown of most homeruns ever.

Downing served up the pitch that sent Aaron on to 715 — and beyond.

The nationally televised game, rare at the time, would have been a run-of-the-mill early season game for anyone else if it wasn’t for so many people beyond local fans that wanted to see the breaking of Ruth’s record as it happened.

Of course, there were also a lot of people who did not want to see it – and who didn’t want it to happen at all, because of the color of Aaron’s skin.

Had Twitter (or, worse, Parler) existed in 1974, it likely would have crashed from the expressions of dislike for the possibility of a Black man in the south — or anywhere for that matter — breaking the pinnacle baseball record, especially one that was then held by a white man.

Not all of that animosity came from adults. While at school on Monday I remarked that I was looking forward to watching the game that night and hoped to see Aaron break the record.  I vividly recall one of my classmates expressing… well, lets just call it the contrary view.

Now, I’m ashamed to admit that, despite cheering Aaron on, I hadn’t come too far from developing a similar attitude to that of my classmate’s. I do like to think that by the time I grew up, though, I had… well, grown out of that impervious cultural viewpoint.

At least, that’s what I always tell myself.

But there’s always the matter of Aaron’s career after that Monday night in Atlanta.

He finished out that season with the Braves, and I even got to see him play in one of his final trips to the Astrodome late in the year. He wanted to play beyond that season, but the team moved on. He then spent his final two years in Milwaukee with the Brewers, thus joining two other legendary baseball players in Ruth and Willie Mays in having the distinction of beginning and ending their careers in the same city — but for different teams.

I am ashamed to say that my wokeness always seems to snooze a bit when it comes to one aspect of Aaron’s legacy.

Never have I ever forgotten that Babe Ruth’s lifetime total was 714. There’s many explanations as to why. I remember mostly because, allegedly, Joe Friday’s badge number in the classic television show Dragnet was 714 in tribute to Ruth.  That origin story is disputed, but the number 714 maintains cultural strength due to Ruth.

Some of it is also on cultural mythology that, 85 years after Ruth retired, he still is considered the legendary, forever-virile, All-American athlete… although that overlooks the reality that the Yankee legend likely was closer in personality and style to the cocaine-fueled, havoc-wreaking, messy 1986 Mets.

I mean, how often did those of us of a certain age hear President George H.W. Bush gush about having had the chance to meet Ruth?

And, despite my instinctiveness to always – always – put a steroid-infused asterisk next to Barry Bonds’ total of 762, I still have to look up Aaron’s total to remind myself that when he retired at the end of 1976 his total was 755.

My history Ph.D. is not in sports history. Still, I’m not going to solely blame my recurring brain fart on having grown up among racists.

Some of it is on me, not remembering the number 755 because it didn’t have the impression on my grey matter like 714 did. (Aaron’s Negro League homeruns weren’t counted officially by MLB, nor were any Negro Leagues stats, until this year — so technically, Aaron now has 760, holding second while remaining at the top among other records.)

How much of it is due to that same culture that didn’t even want to see Aaron own the record, is anyone’s guess. Much like many trans people (and LGBTQ people in general), his impact in history was erased or minimized because people couldn’t accept his success.

Even if you can’t bring yourself to remember 755, then remember something else: On that Monday night in 1974 that was primed to be historic, the commissioner of baseball, Bowie Kuhn, couldn’t be bothered to attend.