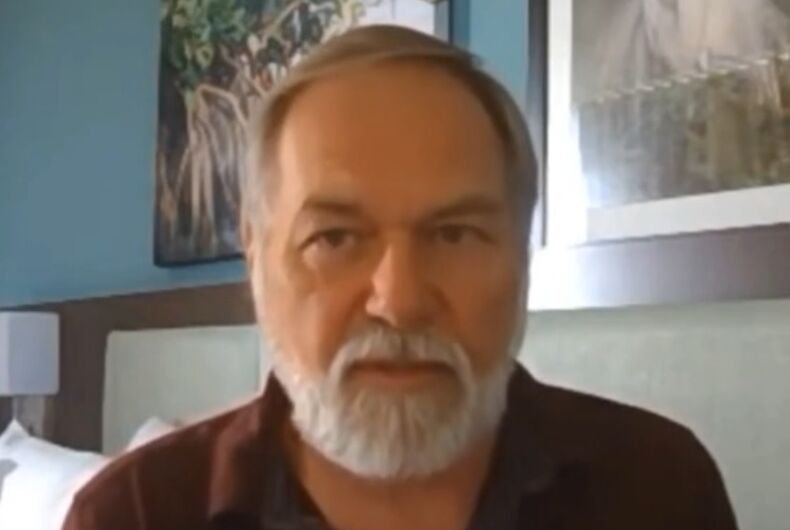 An anti-LGBTQ activist is claiming that Donald Trump lost his 2020 election to Joe Biden for a very peculiar reason: he claims that Trump was too pro-gay and God intervened to make him lose the election.

“Why if Donald Trump was, as I believe, God’s man in the White House for four years, why did God not preserve it?” Lively asked “Because if God had given him favor, nothing that mankind could have done could have removed him from that office.”

Related: Christian pundits say homosexuality is a bigger sin than slavery, so Black people should get over it

Scott Lively is the founder of the California branch of the SPLC-designated hate group American Family Association and is perhaps best known for his anti-LGBTQ advocacy in the U.S., Uganda, Latvia, and Russia. In 1995, he co-authored The Pink Swastika, a book that claims “homosexuals [are] the true inventors of Nazism and the guiding force behind many Nazi atrocities.”

Appearing this weekend on the Swamp Rangers radio program, Lively said that he was an ardent supporter of Trump, but that Trump was good on every issue “except on the homosexual issue, which I think is his biggest mistake.”

It’s “the reason why he lost the election,” Lively claimed in video caught by Rightwing Watch. “He defied God on a fundamental tenet of the Bible and never repented of it.”

“And yet the one thing that he did during that time that would virtually guarantee God’s favor being removed was to put his own personal stamp of approval on behavior that God condemns in the harshest possible terms in the Bible, which is specifically male homosexuality. Homosexuality generally, but the condemnation is specific to male homosexuality.”

The Trump administration worked hard to roll back and prevent the expansion of LGBTQ rights for the last four years, and Joe Biden ran on a platform of expanding LGBTQ rights, something that he has already done in his first week in office. So it might come as a surprise to LGBTQ people that Lively believes that Trump was, in fact, too pro-gay.

But Lively ignores all the policy made by the Trump administration and focuses on one thing: Trump appointing Richard Grenell to be the U.S. Ambassador to Germany and then later to serve as acting Director of National Intelligence (DNI) for about two months. Grenell is out as gay and helped with the GOP’s 2020 LGBTQ outreach.

“Trump fully endorsed and backed and applauded Grenell,” Lively explained. He said that he liked “Grenell’s loyalty,” but said that the bottom line was that Grenell “was an outspoken advocate for the central doctrine of the progressive movement, which is queer theory.”

Donald Trump invents “Office of the Former President” for himself

The Resistance hasn’t won yet. The war isn’t over.