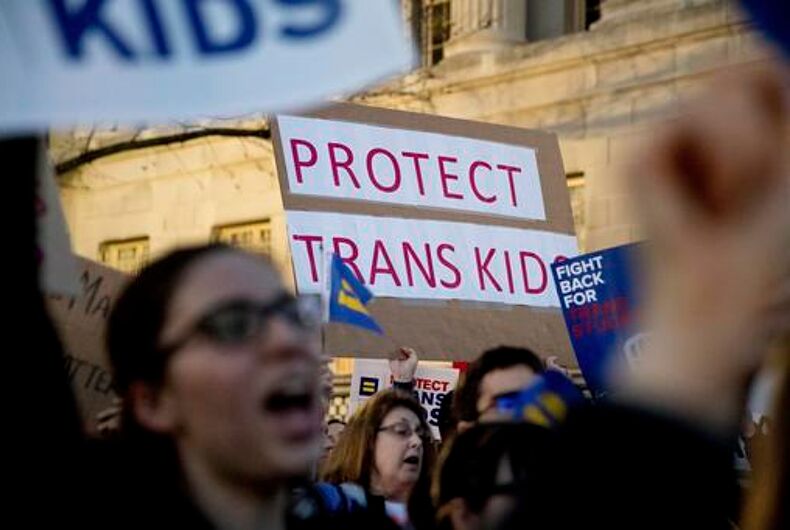 The Montana House just passed two bills that restrict the rights of transgender youth, and the ACLU is already promising to sue the state as the bills get sent to the state senate.

House Bills 112 and 113 would ban student athletes from participating in sports as their gender and prevent minors from receiving health care related to gender transition, respectively. H.B. 112 passed with a 62-38 vote and H.B. 113 passed with a closer margin of 53-47, after a debate yesterday where the bills’ proponents repeatedly referred to transgender girls and women as “males.”

“Children live under the guardianship of adults precisely because they lack the maturity, prudence and experience to make safe responsible decisions for themselves,” said Montana Rep. John Fuller (R) in support of H.B. 113. The bill could result in doctors in the state receiving fines if they provide gender-affirming care for transgender youth in the state in accordance with recommendations from health care organizations.

Just a side note – I hate it here.

“WHO WOULD EVER DO THAT?” Strangio tweeted, frustrated by the state legislators’ ignorance of transgender people.

H.B. 112, the sports bill, flies in the face of the Biden administration’s interpretation of Title IX of the Education Amendments of 1972, which bans discrimination “based on sex” for schools that receive federal funds, which is most schools.

“Children should be able to learn without worrying about whether they will be denied access to the restroom, the locker room, or school sports,” Biden’s executive order said.

And the ACLU of Montana is already threatening a lawsuit, possibly in response to violations of Title IX.

“Montana could lose up to $484 million in federal education dollars if it passes HB 112,” the organization tweeted. “That funding will harm a lot of students.”

Montana could lose up to $484 million in federal education dollars if it passes HB 112. That loss of funding will harm a lot of students. #MTLeg

At the federal level, U.S. Rep. Greg Steube (R-FL) introduced a bill this year that would require state and local school athletics governing bodies to keep anyone assigned male at birth out of women’s sports. His bill would define sex as “based solely on a person’s reproductive biology and genetics at birth.”

Advocates of transgender youth say that the sports legislation will only lead to further social isolation for trans kids and deny them the opportunities and benefits of participating in sports, all in an effort to deny their gender identity.

“Claiming that being assigned male at birth makes one constrained to the category of man and the so-called biology of maleness for their entire lives is tantamount to erasing the embodied and lived experience of trans people. A woman who is trans is a woman,” wrote the ACLU’s Strangio in a Medium article about the GOP attempts to force transgender girls and women out of school sports.