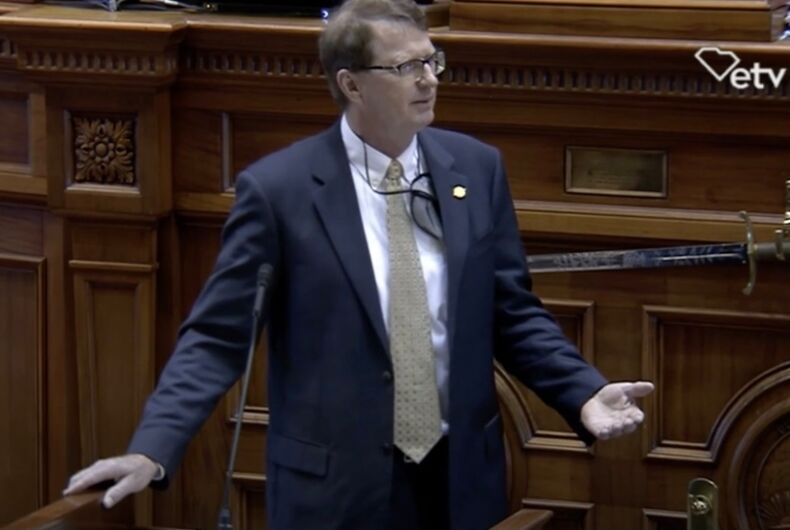 LGBTQ organizations are condemning a state senator in South Carolina who went on a bizarre, anti-LGBTQ rant — using Martina Navratilova to put down transgender people — while debating an anti-abortion law that was under consideration.

Senator Richard Cash (R) claimed that the Civil Rights Era and marriage equality have caused the “slow, downward, moral decline in this country” he’s seen throughout his entire life. He argued that the proposal under consideration — which bans abortion as soon as a fetus’s heartbeat can be detected, essentially preventing most from receiving an abortion once they learn they’re pregnant — not only doesn’t go far enough, but is the continuation of the “flat out rebellion…against God’s moral law” that America exists in today.

“We are in a slow, downward, moral decline in this country… that was accelerated in the 1960s and continues on to this day,” Cash opened his remarks. “I am going to get theological. I believe as a nation, we are in rebellion against God and God’s moral law. Just flat out rebellion.”

Cash opined that “so many things have happened in our lifetime that we have become numb. It takes about 5 or 10 years, and we become numb to the last thing that happened, because the next thing’s already among us.”

The first ‘thing’ he bought up was marriage equality: “It wasn’t too long ago that this body — I wasn’t here — but they passed something about marriage, defining marriage between man and a woman,” he recalled. “The Supreme Court came along and said ‘no, no, no, no, anybody can get married. Two men, two women. We’re going to throw out everything we know about marriage and human history. We’re going to throw out all the state laws that might regulate or govern this ancient institution’,” he said referencing the U.S. Supreme Court’s decision in Obergefell v. Hodges.

“You know what? We don’t think about that anymore. It’s always on to the next thing in this downward spiral,” Cash claimed. “Now we’re talking about transgenderism, and it’s frankly so crazy.”

Cash continued, “it’s hard for me to wrap my head around it, that someone can wake up one day in a man’s body and say, ‘I think this is all messed up. I think I’m a woman…’ or vice versa,” he says before bringing up a proposal he previously introduced that would have restricted trans girls and women from participating in sports activities under their gender identity. “Simply, if you’re a young man, biologically, you cannot claim to be transgender and then compete against young women in sporting events. Right?”

Cash mocked “our cultural elite” that have turned trans issues into “the new front of the civil rights effort,” and then criticized President Joe Biden “an executive order basically saying the same thing.”

“Now we have a President that wants to say, ‘if the boy says she’s a girl, then he – he, she – should be aloud to compete. Maybe even use the bathrooms and showers because you cannot deny these transgender person their basic rights,” Cash said.

He rambled on to bring up out tennis legend Martina Navratilova, first bringing up her “great rivalry” against Chrissy Evert before adding she “was an out of the closet lesbian at the time, which was a little unusual…”

“At that time, she was kind of on the forefront of the civil rights effort. Then this whole transgender athletics thing came along, and she fell behind the times,” says Cash, referencing her stance against trans athletes competing against cisgender athletes, which she has somewhat changed tunes on since by interviewing trans people and signing statements in support of trans athletes.

“She happened to say something like, ‘I don’t think that’s a good idea… let biological men… compete against women.’ Those who are more politically correct and further advanced in their understanding of where we’re going next said, ‘you’re wrong about that.'”

Looking at his colleagues, Cash remarks, “you’re all thinking, ‘oh, boy, you’re way out in the weeds now…’ but I’m not. Because the point was, as a nation, we’re in rebellion against God’s moral law. That’s just one manifestation of it.”

He then returns to talking about the bill in question, pledging to not only seek a further limitation against abortion, but condemn his colleagues for not standing against abortion and LGBTQ rights enough.

“Some of y’all just want this to go away. Apparently it’s gone away today, and I understand that, and I’m going to vote for this bill, but it’s not going away today,” he promised. “When we pass this bill, I’ll still be working on a bill that will still protect an innocent life from the point of conception.”

“We will not allow Senator Cash’s inflammatory tirade against LGBTQ South Carolinians go unchecked – and let me be clear, his words are not just empty vitriol. He has a long history of pushing legislation that would directly threaten the lives and dignity of LGBTQ people in our state,” said AFFA’s Chase Glenn, chosen to speak for the group.

“Cash’s speech, however, advocated for the erasure and marginalization of LGBTQ people and was immediately harmful.”

Cash also made earlier comments against including a provision in the bill that allows ‘exceptions’ for women who are victims of rape or incest to access abortions. Cash’s Republican colleague, Mia McLeod, was so offended by those remarks that she stood and revealed that she herself was a victim of sexual assault, and she found that “it’s this bill that mocks God by taking away our rights, our liberties, our freedoms and our choices.”

Although the ‘exception’ was added, McLeod ultimately voted against the proposal, the only Republican that did so. The GOP-majority chamber passed it anyway.

This week a senator in #SouthCarolina went on an extended, inflammatory anti-#LGBTQ rant on the floor of the Senate. We're here – alongside @AFFACharleston, @LGBTCenterSC & @genderbenders1 – to push back and tell queer folks in SC: We've got your back. https://t.co/nGyAHFEfEQ pic.twitter.com/MSG6NLn0mJ

This isn’t Cash’s first time standing against LGBTQ equality. Since 2014, he has campaigned proudly against marriage equality, writing on his website that “God designed men and women for a unique type of companionship in marriage, which naturally results in children… I will actively oppose those that undermine it.”

Cash previously ran against Lindsey Graham in the 2014 primaries for his U.S. Senate seat. Cash came in third, and the incumbent Graham won and retained his seat. He won the election for his state senate seat in 2016, and easily earned reelection this past fall.

The abortion law’s passing comes just days after the Human Rights Campaign (HRC) once again ranked South Carolina as one of the states with the least LGBTQ-friendly laws in the United States. They deemed the state a high priority to achieve basic equality.

Trans South Carolinians further have zero protected transgender-inclusive health benefits when working for the state and cannot update their gender on driver’s licenses or birth certificates.

Rob Portman is considered pro-LGBTQ. But he’s undercut our rights as much as he supported them.