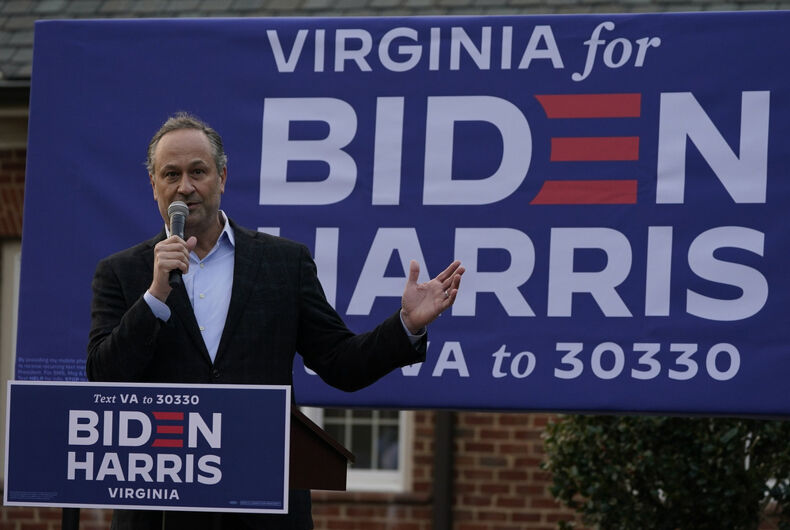 As the incoming First Lady, Dr. Jill Biden’s account will convert to @FLOTUS, but Doug Emhoff’s username required more thought. As the husband of the first female Vice President, he will be officially known as the Second Gentleman and will use the Twitter account @SecondGentleman.

Related: Two of the most powerful gay people in the world met to discuss the future of Europe

Gov. Jared Polis, (D-CO), the first out gay man elected governor of a U.S. state, also faced a similar dilemma with his partner Marlon Reis. Reis is officially known as the First Gentleman. Chasten Buttigieg would have been the First Gentleman if his husband, former presidential candidate Pete Buttigieg, had won the election.

The first First Gentleman in the Unites States was James E. Ferguson, a governor of Texas at the beginning of the 20th century. He was indicted and impeached during his second term. His wife later ran and held the office for two non-consecutive terms.

Gauthier Destenay, the First Gentleman of Luxembourg, became the first spouse of a gay world leader when he married Prime Minister Xavier Bettel in 2015.

The Trump administration deliberately slighted Destenay in 2017. The White House posted a photo of political spouses and partners posing with Belgium’s queen. While the administration named every First Lady, they omitted Destenay entirely. Secretary of State Mike Pompeo scuttled plans to travel to Luxembourg shortly before Biden’s inauguration after government officials refused to meet with him, saying it wasn’t worth their time.

Folks — This will be the account for my official duties as President. At 12:01 PM on January 20th, it will become @POTUS. Until then, I'll be using @JoeBiden. And while you're here, follow @FLOTUSBiden @SenKamalaHarris @SecondGentleman and @Transition46.