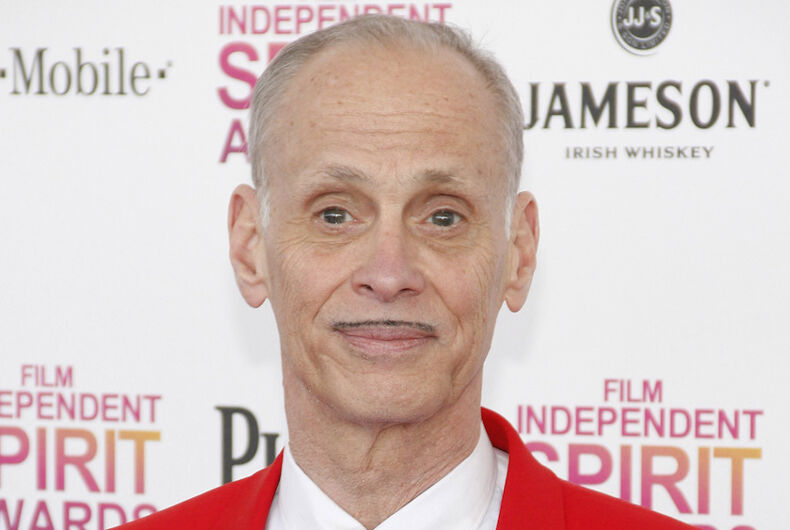 Even in 2019, when the American John Waters went on tour in Australia to promote a new book, he never crossed paths with his namesake, known for his roles on stage and screen.

Related: John Waters reveals his list of the best films of 2020

But with the recent announcement that the Australian John Waters is launching a concert series in 2021 and hopes eventually to bring it to the United States, there’s a chance they may finally meet.

America’s John Waters, who has toured Australia several times, says he’d like that.

He “sounds like a lovely man” with “an absolutely lovely career,” said the Northern Hemisphere’s John Waters. “I hope we meet one day and do a photo opportunity together.”

Although the American John Waters gets practically non-stop attention for all sorts of reasons, from his books and movies to his fashion modeling and art collecting, it’s the Australian John Waters who’s in the limelight this month.

January 9 is opening night for the Australian John Waters’ new show, The John Lennon Songbook, a tribute to the late Beatle. The world premiere will take place at the Hayden Orpheum Picture Palace in North Sydney, and then he’ll perform at other venues in Australia. 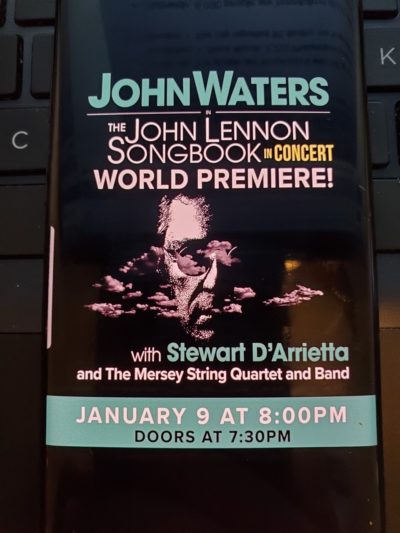 This is the second show that Australian John Waters has mounted in tribute to John Lennon, both with collaborator Stewart D’Arrietta. Their first was Lennon: Through a Glass Onion, which debuted in 1992. This one is pegged to the 40th anniversary of Lennon’s death on December 8, 1980, and will include songs both from Lennon’s years as a Beatle and as a solo artist. This time, the Lennon songs won’t be abridged as some were in Glass Onion but will be performed in full. Waters and D’Arrietta will be accompanied by the Mersey String Quartet and Band.

The Australian – John R. Waters – is one of the country’s most recognized and respected film, theater, and television actors, as well as a singer, guitarist, songwriter and musician. Born in London, the son of Scottish actor Russell Waters, he moved to Australia in 1968, taking advantage of the “ten pound” opportunity offered by the government at the time to entice people to move there. After initially landing work at a “sheep station” in Queensland, this John Waters joined a cover band, acted in plays and musicals, and auditioned for television and movie roles. He’s been Captain von Trapp in The Sound of Music, Gomez Addams in The Addams Family musical and The Narrator in Richard O’Brien’s Rocky Horror Show.

Now 72, John R. lives in Sydney with his third wife, Zoe Burton. When he announced the John Lennon Songbook show last year, he said he hopes to bring it to America, where Lennon lived when he was killed outside the Dakota apartment building in New York City. If he comes to America, it would be a follow-up to a five-month visit he and D’Arrietta made in 2014 and 2015, including shows Off-Broadway. They’ve also performed in London and Edinburgh.

His American counterpart – John S. Waters – is a writer, filmmaker and visual artist who lives in Baltimore, Maryland and has a cult-like following. His movies include Pink Flamingos, Female Trouble, and Hairspray; and his books include Shock Value, Role Models, Carsick, and Mr. Know-It-All: The Tarnished Wisdom of a Filth Elder. A gay icon, known for his edgy humor, he’s been called the Pope of Trash, the Prince of Puke, and the Sultan of Sleaze.

Now 74, John S. has been a fashion model for Nike, Nordstrom, and Saint Laurent, and has appeared in videos and TV shows ranging from The Creep to The Simpsons to Law and Order: Special Victims Unit. Last spring he launched his own line of face masks and even wore one at the beginning of the graduation talk he gave to students at New York’s School of Visual Arts, one of the first examples in history of product placement during a commencement speech.

The similar names can be vexing at times for Australians who are fans of America’s John Waters, especially this month.

“Part of being Australian is enduring the brief excitement followed by crushing disappointment when you come across something about the other John Waters,” said Robert Shaw, an Aussie who founded a popular Facebook page devoted to the American celebrity, called At the Movies with John Waters.

Shaw said he recently saw a poster about John Waters having a “WORLD PREMIERE” in Sydney and thought for a second that John S. might have a new movie coming out. But then his heart sank when he read more and learned it was “the wrong John Waters” doing “the John Lennon thing.”

John S. said he’s well aware of what the Australian is up to, thanks to modern technology. “I think we probably… see each other’s Google Alerts,” he said in a phone interview. “That’s how I know about him.”

The American is philosophical about the coincidence, saying he doesn’t think it’s a big problem. He said it’s inevitable that others would have the same name he does. “There’s plenty of them.”

During his last tour Down Under, which included stops in Melbourne, Sydney, Bribane and Hobart, John S. opened by singing Imagine, one of Lennon’s best-known songs, in a nod to the Aussie crooner and his connection to the former Beatle.

John S. said he takes precautions when he tours in Australia to make sure audiences know which John Waters will be on stage.

“When we go over there, we put “This Filthy World, in big letters or “The Prince of Puke,” or something like that. That’s how we made sure.

Even without the warnings, John S. said, he has faith that people can tell the two apart.

“I don’t think he’s going to come out and do This Filthy World and I’m not going to really do the entire John Lennon story. So I think you’d have to be pretty naïve to get us mixed up.”

The United States has at least two more John Waterses who are public figures.

John H. Waters is an architect and historian in Illinois who serves as preservation programs manager for the Frank Lloyd Wright Building Conservancy, a consultant to Taliesin Preservation, a member of the Society of Architectural Historians and a director of the Chicago Summer School of the Victorian Society in America. He gives lectures about architects such as Wright and H. H. Richardson.

“A few people have caught on to my name being the same as the film director, and there have been lighthearted jests about such,” the pastor said in an email message. “Even though the filmmaker and I share the same name, our worldviews are apparently very different, so my congregants have enjoyed the contrast of the two John Waterses who share the same name. We have the same name in life, but a different aim in life.”

Pastor Waters said he has made light of his “famous name” and brought up other John Waterses in his teachings.

“For example, I talk about more than one person having the name “John Waters,” but I then tell them humorously that I am the real ‘John Waters,’” he said. “This leads to teaching a lesson about knowing the real you and being authentic in your faith without being an artificial version of yourself.  Thus, I use my somewhat common name as a point of teaching about spiritual identity and authenticity.”

There’s one John Waters that the American isn’t eager to meet.

John A. Waters is a 65-year-old Irish journalist, author and social commentator turned virulent anti-mask activist known for his rants against compulsory mask-wearing, which he considers tyranny and destructive of the human spirit. In April, he and activist Gemma O’Doherty led a “liberate Ireland” rally in Dublin challenging the nation’s lockdown during the COVID-19 pandemic. Last fall, John A. appeared at another protest rally with a group that put up a banner reading, “Only Slaves Wear Masks.” He believes the mask is “a way of denying the very human face of the person,” and is “turning us all into zombies.”

In 1996, this John Waters had a daughter named Roisin with Sinead O’Connor, the singer who famously four years earlier tore up a photo of then-Pope John Paul II on Saturday Night Live. The two never married.

John S. said he got mistaken for the Irish John Waters when he toured Ireland years ago and was interviewed by a journalist there.

“She was being so mean to me and I thought, ‘What is the matter with this woman?’ She was really hateful,” he said. “And then she started talking about Sinead O’Connor. I said, ‘Wait a minute. I wasn’t married to Sinead O’Connor!” Then she went, ‘Oh my God. I’m sorry.’ She thought I was him.” After that, he said, “she was very nice and wrote a nice article.”

The American said he doesn’t anticipate a future photo opportunity with the anti-masker from Ireland.

“I have read about him and I do hope to never meet him,” he said. “And I’m sure he has no desire to meet me.”

The filmmaker has, however, met two other people named John Waters.

“I’ll tell you the most famous one I know. He was the window washer at the Charles Theatre [in Baltimore] for maybe 10 years…We used to joke all the time.”

Then there’s a man who had a strong influence on him – his late father, John Waters Sr.

“My father always used to say he is the real John Waters, because I was a junior,” the filmmaker said. “So it all depends where you’re sitting.”