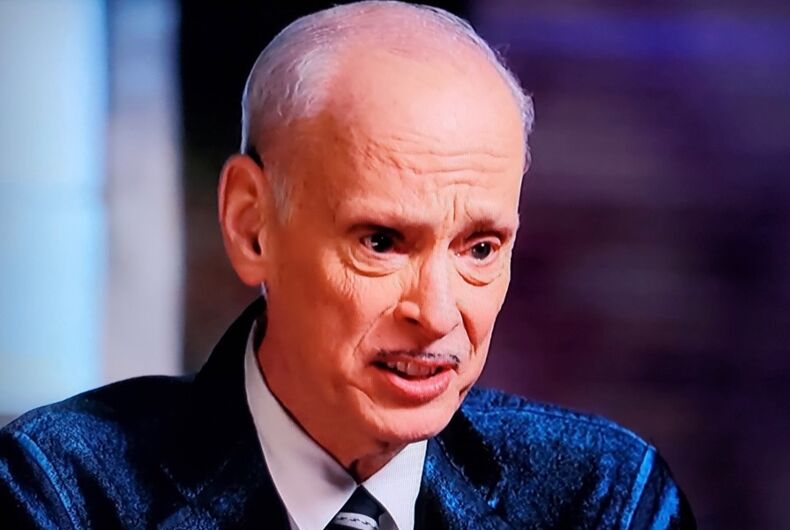 Writer and filmmaker John Waters has spent much of his career looking for ways to shock others. Recently, he’s gotten a shock of his own.

Waters appeared on the PBS series Finding Your Roots, where Harvard University professor Dr. Henry Louis Gates Jr. helps “today’s most compelling personalities discover the surprising stories buried within their own families,” as the network puts it.

Related: Janet Mock discovers where her last name comes from & her reaction may take you by surprise

One of the discoveries that researchers made about Waters is that an ancestor on his father’s side — Somerset R. Waters, his great-great-grandfather — owned slaves before the Civil War. The 74-year-old filmmaker didn’t take it well.

Waters, whose hit movie Hairspray was about a high school student’s attempts to integrate a local television dance show, was one of two stars featured in the premiere episode for the seventh season of Finding Your Roots, which premiered on January 19. The other celebrity profiled was actress Glenn Close.

In the episode, entitled “To the Manor Born,” it was also revealed that another ancestor of Waters’ was one of the wealthiest landowners in Maryland, that his maternal grandparents divorced at a time when that was rare in Catholic families, and that one of his forebears died while mining for gold in the Klondike.

Are you ready for the Season 7 premiere of #FindingYourRoots? I’m looking forward to sharing the DNA discoveries of #JohnWaters and #GlennClose on tonight’s episode. Watch with me at 8/7c on @PBS or https://t.co/keAMfXwqBd! pic.twitter.com/wHaRCQdnel

But it was the disclosure about the slave-owning ancestor that seemed to shock Waters the most – even though he knew it was a recurring theme of the show.

In the 1850s, Somerset Waters was a farmer in Carroll County, Maryland, north of Baltimore and just south of the Mason-Dixon line. According to records from the 1860 census, Somerset Waters held four people as slaves, three males and a female, ages 6 to 26.

“How does it make you feel to know that your ancestor owned slaves?” Dr. Gates asked Waters.

“Well, I’m shocked always that there was slavery, period,” Waters said. “I’m shocked for the whole situation of it, ever.”

Waters told Gates that his hometown of Baltimore is a city that continues to struggle with racial issues and that he has always been an advocate for equality.

“My whole life, I’ve always been pissed off about racism, as much as I can possibly be. I live in a city that’s still torn with that, torn with that. And it’s because of people like him,” he said, referring to his ancestor, “and I’m sure that his father was even more racist. It’s passed down like a bad disease.”

In addition to the census records, Dr. Gates showed Waters a newspaper ad that his great great grandfather placed in 1858, offering a $500 reward for a runaway slave, “a Negro woman calling herself Caroline Gassaway,” if she is “apprehended and returned” to him.

In state archives, researchers found court documents dated shortly after Caroline Gassaway ran away, that showed four men, three of them freed people of color, were arrested for helping her escape. They found news articles showing that they were found guilty, and ordered to be sold into slavery.

“They were brave. They all should have taken a hatchet to him,” he remarked.

Waters wanted to make sure he understood the concept of a judge ordering freed men to be sold in slavery.

“So if you were a freed Negro you could be sentenced to be a slave?” he asked. “Oh God, I’ve never even heard of that one.”

To make matters worse, Dr. Gates said, two of the freed men were purchased by Somerset himself, for $800 and $175, in what he said “may have been the worst possible situation” for them.

“Your great-great-grandfather purchased two of the former freed men who helped one of his slaves to escape,” Dr. Gates said.

“So he didn’t give up,” Waters said. “He was vindictive.”

Waters said he can see why some people don’t want to research their family history.

“You think maybe that’s why you don’t want to look sometimes. For fear. Because what can you do about it, you know?”

Researchers had other revelations for Waters, including a discovery that his ancestor from his father’s side, Richard Waters, served in the American Revolutionary War with Gen. George Washington at Valley Forge, Pennsylvania.

Richard was born in Maryland around 1760, commissioned in 1778 to join the Second Maryland Regiment, and went to Valley Forge a month after he joined the army. Records show he was an assistant surgeon at the famous encampment.

After the war, Richard Waters became a doctor in Maryland and raised a family.

“Your ancestor was a patriot,” Dr. Gates said. “That’s quite something.”

“He probably was a good soldier and a good person, so I’m happy to hear that,” Waters replied.

On his mother’s side of the family, researchers found that John’s great-great-great-grandfather, George Price Whitaker, ran a company called Principio Furnace with several others and became one of the wealthiest men in Maryland, eventually controlling 10,000 acres.

According to Dr. Gates, “he saw the future. He figured out how to become an ironmaster.”

“An ironmaster. That almost sounds like, I don’t know, a sexual term,” Waters quipped.

“Well good, an ironmaster,” Waters said. “That’s what I’ll be now. A relative of an ironmaster. And proud of it.”

The episode with John Waters and Glenn Close can be viewed for free on pbs.org until February 16. Other LGBTQ celebrities appearing on this season of Finding Your Roots are actress Jane Lynch, CNN anchor Don Lemon and TV personality Andy Cohen.

#JohnWaters had always felt that he was destined for stardom. When he was a kid, John’s uncle landed him a gig in “Howdy Doody'' as a member of the peanut gallery which solidified his desire to be a part of the entertainment industry. #FindingYourRoots pic.twitter.com/fRXmfx7DNa

On this week’s episode of #FindingYourRoots, #JohnWaters discovered the dramatic truth behind his family fortune that stemmed from his great-grandmother. Watch the full story on https://t.co/DKlMPvPjLA. pic.twitter.com/t0oKdeGxXk