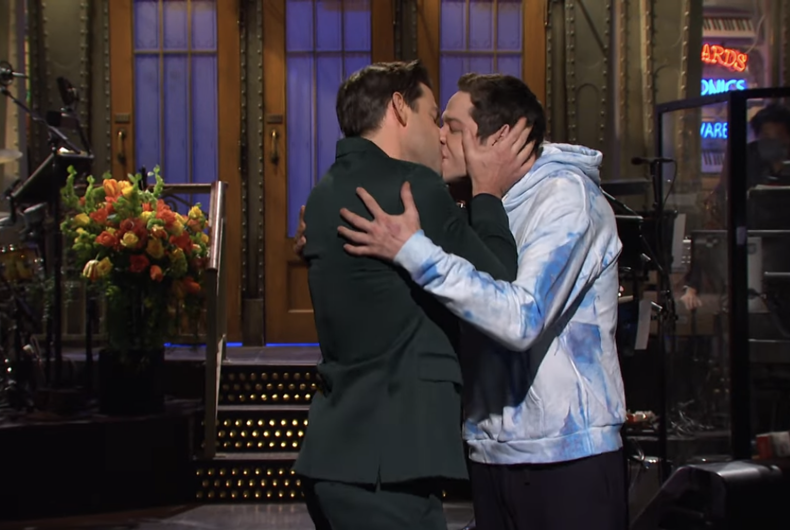 Hosting the first episode of Saturday Night Live in the year of 2021, actor John Krasinski tried to bask in the moment of appearing on the famed comedy skit show.

But all The Office alum got instead was a bombardment of questions and reminders about his character Jim Halpert from the hit sitcom.

Krasinski has also starred in horror, romance, and military films such as A Quiet Place, It’s Complicated, 13 Hours: The Secret Soldiers of Benghazi, and has earned a Screen Actor’s Guild (SAG) Award nomination for his role as the titular character in the thriller television series Jack Ryan, but he can’t escape his famed turn as a Dunder Mifflin sales rep for eight years.

As he took the stage to deliver his monologue last night, “audience members” (aka SNL cast members Kenan Thompson, Alex Moffat, and Ego Nwodim) interrupted to make The Office-related remarks to the host.

Moffat asked Krasinski if he’s “Jim from The Office,” and although Krasinski tells him, “actually, I’m John,” Moffat followed up by ‘asking’ him to “do The Office.”

“I’m not actually sure what that would even look like,” Krasinski says.

“Pam is a fictional character, and that’s where she is. But I am actually here,” he says in an attempt to move on. He tried to share advice from his wife, actress Emily Blunt, who has hosted SNL before.

But then Nwodim ‘asked’ Krasinski, “you looked different.” When Krasinski shares that he was regularly exercising for the role of Jack Ryan, Nwodim told him, “yeah, you need to stop it.”

Because “Jim is soft… Jim sits all day. You know, when you go in, your hand goes in like memory foam.”

Then came Thompson’s ‘question’, which was really a directive for Krasinski to “kiss Pam.”

“I need you to kiss Pam, that is what I need to see today,” Thompson said.

Then out comes SNL cast member Pete Davidson, who’s ‘confused’ for Pam by Thompson. Davidson explains to Krasinski that because everyone’s “been inside for the last year, watching The Office nonstop,” they can’t help but still see him as the character.

“I think they really need someone to be Pam,” Davidson explains. “I think we’ve got to give them what they want, Jim. You have to kiss Pam.”

John takes questions from the audience about The Office and…actually just The Office. pic.twitter.com/hhUs0Mcrqz

"I think they really need for someone to be Pam."

I turned on SNL to hopefully see some MGK/Pete Davidson action and instead got to see Pete Davidson kissing John Krasinski. This is fabulous.

Me explaining to my future children how covid lockdowns eventually lead to John Krasinski and Pete Davidson kissing on #SNL pic.twitter.com/6c3ZdhbVYu

Also, Pete Davidson and John Krasinski starring in every sketch together tonight, so they really are the new Jim and Pam.#SNL #Saturdaynightlive pic.twitter.com/xRAJxTbNIk