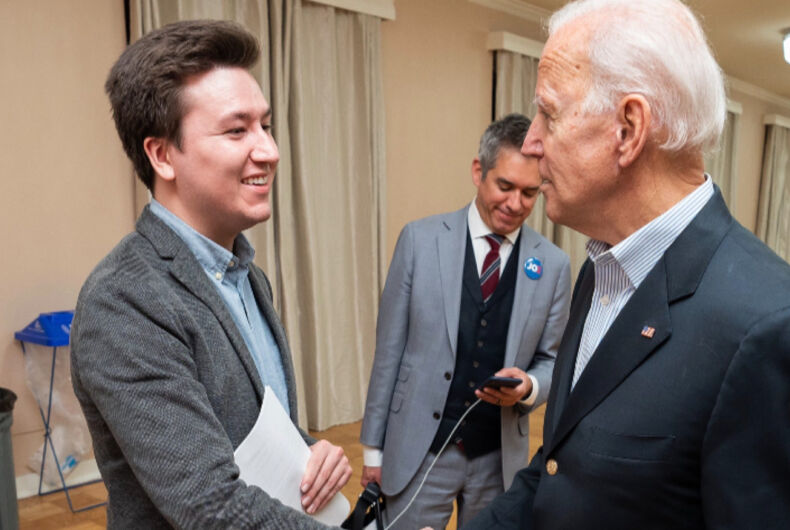 On May 6, 2012, Joe Biden made an appearance on Meet the Press. The then-Vice President told moderator David Gregory that he supported marriage equality, stating that Americans will come to understand “what this is all about … who do you love? Who do you love, and will you be loyal to the person you love?”

Biden changed the country by declaring he was “absolutely comfortable with gay marriage. He also changed the life of LGBTQ people — such as Brendan Cohen, who was a senior at his Madison, Wisconsin high school at the time. He came out after Biden’s declaration.

Cohen, now 26, officially started as the social media manager for now-President Biden and other digital interfaces representing him. Previously, he served in Biden’s Presidential campaign nearly from the start in May 2019, working in various platform and editorial roles, until its eventual success.

“In high school, as I was coming to terms with the fact that I was a gay man, I realized pretty early on that one political party supported my rights and the other didn’t. It was the initial spark that got me to start paying attention and got me involved,” Cohen told Milwaukee Journal-Sentinel‘s Laura Schulte.

“I remember Vice President Biden on Meet the Press expressing his support for same-sex marriage — and for a kid who was scared and in the closet at the time it meant the world and helped give me the confidence to come out and live openly,” he reminisced.

Cohen graduated from the University of Wisconsin-Madison with a bachelor’s degree of science in political science and digital studies in 2017. He immediately began working for Democratic Party candidates, and eventually became the digital director for the Dan Koh’s primary congressional campaign in Massachusetts, and Tony Evers’ gubernatorial campaign in Wisconsin. The latter was successful.

When your friends convince you to go to a straight bar and you realize you've made a mistake. pic.twitter.com/Q6yTsI5NQH

After, Cohen set his sights on working for a Presidential campaign. He applied as soon as Biden declared candidacy, the Journal-Sentinel reported.

“It was honestly a dream come true,” he said.

Cohen had previously lived in Washington D.C., and prepared to travel with Biden as the campaign got more competitive, but the growing threat of coronavirus ended up requiring Cohen to work from home for much of the most crucial points of Biden’s candidacy. Cohen ended up living back in Wisconsin for some time.

But “once the pandemic forced us to go exclusively online,” Cohen was elated that he would have “a lot of freedom” as everyone involved in Biden’s campaign was “kind of operating in this new territory.”

“We had a lot of freedom to do all these virtual events and really get our message out to the American people in a digital-first way.”

It all eventually paid off, with Biden coming up victorious in a grueling, competitive Democratic primary, and eventually in the general election, which saw the largest turnout ever.

He described celebrating the victory, via Zoom, with his coworkers as the best moment of his time working for Biden.

It’s been a long journey — 557 days to be exact. There have been a lot of highs, plenty of lows, and some unimaginable twists and turns. But I couldn’t be prouder to be a part of the team that elected the next President of the United States. pic.twitter.com/UvbQKnTuwL

Now, as he leaves Wisconsin to return to Washington D.C. again, he is more than ready to get to work like the rest of the administration. “I think we have a duty and an important job to communicate with the American people in an effective and clear manner,” Cohen expressed.

“Gone are the days of erratic tweets — just a lot of hard work restoring the soul of the nation and building back better,” he tweeted in December.

He will miss, but support, his beloved Green Bay Packers from afar, in addition to his love for cheese curds and Spotted Cow beer.

He’s not too worried about his work, even in light of the previous President’s removal from several digital platforms for a pattern of allegedly inciteful statements. “I don’t necessarily get intimidated but I’m more excited by the opportunity, especially as we get underway,” Cohen said.

I’ve been unable to describe how I’m feeling all day, but I’m humbled, grateful, and beyond excited to join this incredible team at the White House! Gone are the days of erratic tweets — just a lot of hard work restoring the soul of the nation and building back better. https://t.co/pILQJRK0lF