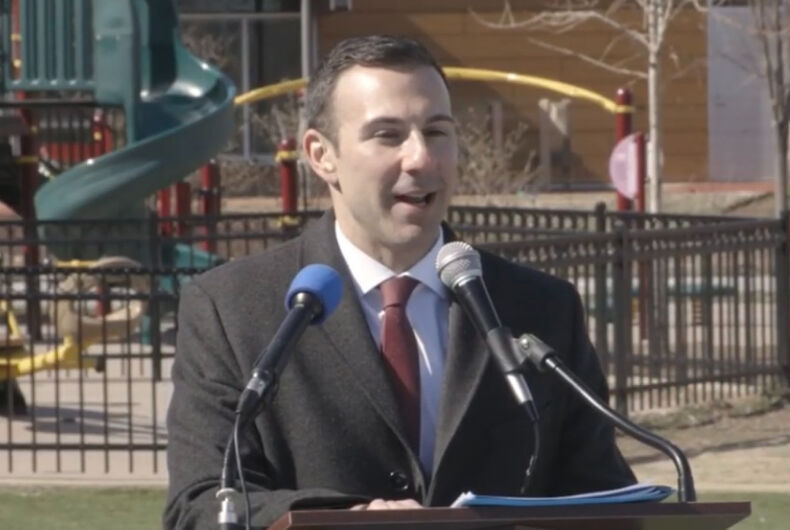 In their latest round of staffing announcements, the Presidential transition team for President-elect Joe Biden (D) and Vice President-elect Kamala Harris (D) announced yet another out LGBTQ person will join their administration.

Jeff Marootian is set to become Special Assistant to the President for Climate and Science Agency Personnel. He will work under the executive Office of Presidential Personnel, which regulates and vets all potential staff members working under the President’s administration.

That means that Marootian may very likely advise the President, or at least participate in discussions with him, about the staff in the Office of Domestic Climate Policy and other environmental or science-related staffers in the executive branch. That would include those at the Department of the Interior, Department of Energy, and the Environmental Protection Agency (EPA) who will comprise what is already being called the most robust, climate-focused staff ever assembled under a President’s administration.

Historically, Presidential Personnel staff have a say in who to hire, fire, or appoint to civil and Congress-confirmed positions within the executive departments, typically under Cabinet-level officials. The office is believed to be responsible for about 4,000 jobs, about 1,600 of which require Senate approval.

President Donald Trump (R) did not have a Special Assistant for Climate and Science Agency Personnel. Under the Trump administration, the Presidential Personnel office was essentially understaffed and stepped over in the vetting process, as Trump relied on his close circle of advisers and family members to make personnel decisions. The department struggled to keep low-end civil positions within the executive departments, including its own, staffed.

In contrast, Biden has already announced dozens of hires in the executive offices. “The policy leaders announced today are accomplished public servants who are ready to build back better for this country immediately,” Biden said in a statement.

Marootian had been the Director of Transportation in Washington D.C. under Mayor Muriel Bowser (D) since 2017. Some of the highlights of his work include installing Pride-styled rainbow crosswalks in the nation’s capitol and was celebrated for helping businesses survive the pandemic through “streataries.” He oversaw 1,100 employees and the city’s public transportation and traffic administration.

Also in a statement, Mayor Bowser said that Marootian “has been a strong and passionate leader who we know will help our country build back better in his new role.”

Marootian volunteered for the Biden transition team’s U.S. Department of Transportation (DOT) Agency Review Team in November. While there, fellow out politician Pete Buttigieg was announced as Biden’s pick for the cabinet-level Secretary of Transportation position.

Biden also just named the former Ambassador to Denmark and Obama advisor Rufus Gifford as Chief of Protocol. He will act as a liaison between the foreign diplomatic corps in Washington and the administration, oversee State Department and Blair House functions, and travel with the president frequently.

The trend continues as Biden sees through his pledge to create the “most pro-equality administration in history” of America.

Prior to becoming Director, Marootian was the Chief Sustainability Officer and Assistant Secretary for Administration under the Obama administration’s DOT from 2015 to 2017. He also served as White House Liaison from 2013.

Before that, Marootian was the Director of LGBTQ Outreach for the Democratic National Committee (DNC), assisting in the party’s successful campaign to re-elect Barack Obama and Joe Biden as then-President and Vice President in 2012. Prior, he worked in the D.C. Transportation department in 2008 to 2011, after serving the district’s Metropolitan Police Department (MPD) from 2003.

It wasn’t immediately clear if Marootian will be stationed directly within the White House, one of the White House-adjacent offices or elsewhere. Nonetheless, he adds to the list of the already high level of LGBTQ representation within the Biden administration.

The New Jersey-originating official has lived in D.C. since 1997, calling his move there “fate.” He has been out for over 25 years.

At the time, Marootian said that his passion outside of his work’s focus was “reforming the criminal justice system,” and that his LGBTQ hero was Ellen DeGeneres.

Congratulations to Jeff Marootian (@DDOTDCDirector) on joining the Biden staff. You’ll do great things there, Jeff – and you’ll be missed. Even if we didn’t always see eye to eye you always listened, which is a trait missing in too many gov’t officials. Best of luck!

#News Respected DDOT Director Jeff Marootian joining Biden White House as Special Assistant to the President for Climate and Science Agency Personnel. An immediate loss for DC government, but expect he'll be a strong voice for our city in the White House. @kojoshow @wcp

.@clinkeyoung will do an extraordinary job leading health policy for the White House and @DDOTDCDirector Jeff Marootian is an outstanding choice, bringing deep experience at the federal and local levels🏳️‍🌈 https://t.co/eIAyo026TN

Marootian’s job is about personnel and agency hiring, but I hope he’ll be able to advise President Biden to take truly bold steps to improve climate policies in cities, like invoking the Defense Production Act to make @sharrowsDC tweet more.