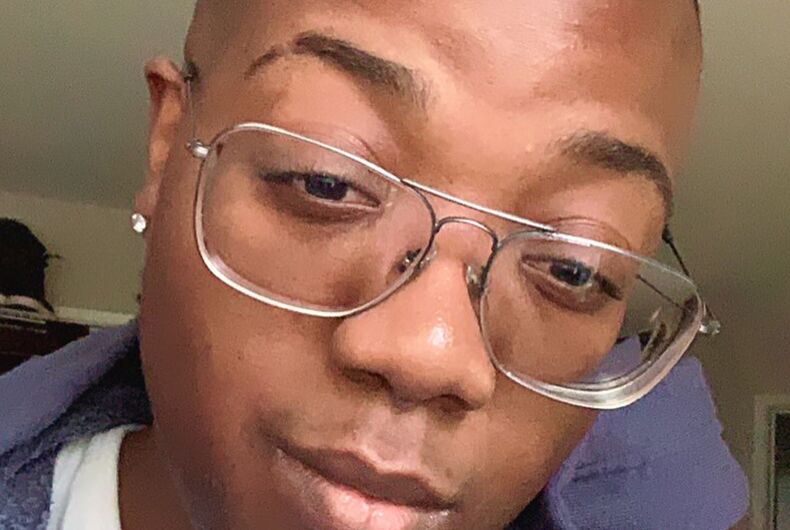 The morning after a violent, white supremacist mob stormed the U.S. Capitol in the name of Donald Trump, transgender teacher Tray Robinson logged on to Zoom to begin the school day with his students.

But after what many have called one of the darkest days in American history, Robinson—who teaches in San Jose, California and was GLSEN’s 2020 Educator of the Year — couldn’t treat it like any already not-so-normal virtual school day.

Related: The Republican gaslighting has begun

Instead, he told LGBTQ Nation, he felt duty-bound to help his students work through the events that unfolded on January 6th.

“We as teachers and educators will define how this moment is remembered in the minds of America’s future,” he said. “Who is going to stand in front of these students if we don’t? History has its eyes on us.”

Robinson teaches science and English to 9th-12th grade special education students, most of whom are students of color. They are struggling, he said, to understand not only the violent insurrection that took place at the Capitol, but also the minimal consequences for the perpetrators involved.

“It’s a little bit terrifying when you have seen…the way that people who look like you have been treated all summer, all shutdown, all pandemic—from George Floyd to Breonna Taylor to Tony McDade, to all those people who were shot down and killed doing things that were benign—and the kids are literally watching our Capitol being overrun and nothing is happening.”

“They’re watching the president who has talked about them as nothing but thugs, as gang members, as murderers, as the worst thing that could happen to the American people, and there are people taking selfies sitting in the Senate chamber, flying the rebel flag.”

Robinson believes his role right now is to use the educational tools at his disposal to help his students feel safe.

“There is nobody who knows how to break down the information that’s flying around these kids better than us teachers,” he said. “It’s time for us to use what we know best in our subject matter and our content to throw up a shield in front of those kids until they are in a place where they can deal with and approach this in a successful way.”

For Robinson, though, shielding his students doesn’t mean ignoring what happened. It means allowing them the time and space to process the events while also keeping them insulated.

“We have to inspire a generation to save our country. And we have to do that by telling them we are going to be the frontline for you. You don’t have to fight this fight, not yet. We will fight this fight. We will teach you how. Watch us do it…You should be safe at your school. You should be safe where you learn. Someone should stand up and say, the evils of the world will not reach you here.”

Teachers today grew up reading Harry Potter, he added, and despite recent revelations of J.K. Rowling’s transphobia, he said the books can serve as inspiration to stand up and fight for what’s right.

“J.K. Rowling may now be a ‘phobe, but she inspired a generation of us to believe that a school could be a safe place, would fight to protect us – and the weakest among us –  from the evil of discrimination and oppression based on identity.”

To Robinson, being what he called a “frontline defender” for his students means teaching them about the systems in place that help the nation confront threats against Democracy.

“What I have said [to my students] today is, we have systems that deal with this. We don’t need to panic.”

“[If we are] creating terror for them,” he added, “We stand to create a belief that they are powerless to protect themselves.”

He also said that queer teachers may find themselves with a unique responsibility to comfort students. Many marginalized students, LGBTQ or otherwise, often connect with queer teachers over the mutual feeling of being different, he explained. Thus, students often choose to turn to these teachers for help .

“We [queer teachers] know and have already organized grassroots movements to reach our students to deal with this kind of trauma that all of our population stands to face now.”

Robinson also wants to ensure kids feel empowered to voice their concerns. His message to students across America: “Speak up.”

“Don’t sit silently behind your keyboard or in your classroom worrying about what is going on because you don’t think we want to answer your questions. Make. Them. Hear. You.”