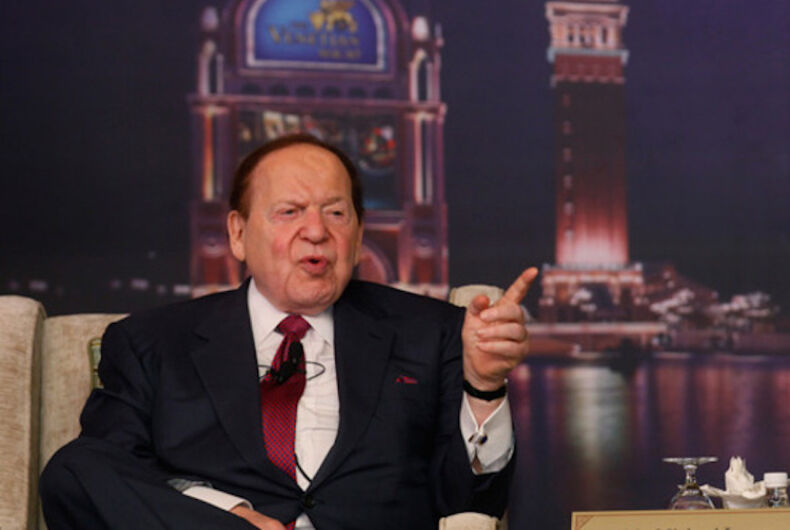 By the time casino magnate Sheldon Adelson died at the age of 87, he had reshaped the GOP through the raw force of his money. While Adelson wasn’t an anti-LGBTQ crusader like other major Republican donors, such as the Uihlein family, he is, without a doubt, a father of the far-right, anti-LGBTQ party that exists today.

Adelson became a political influencer fairly late in life. A self-made man, it wasn’t until the late 1990s that he turned his attention to politics, as he fought the unions that represented his Las Vegas workers. His contributions to candidates were generous, but not over-the-top; for example, he made a relatively modest contribution of $250,000 to George W. Bush’s second inauguration.

Related: White House claims Donald Trump is “the most masculine” president ever

But then Adelson really went big. He was a major funder of the Citizens United effort, the case that eventually led the Supreme Court to throw out any limitations on campaign spending by corporations and PACs on free speech grounds. That ruling cleared the way for the growth of Super PACs, which Adelson helped fund.

Adelson’s main focus was on Israel, where he also funded right-wing causes. He hated President Obama’s diplomacy with Iran; he saw it as a threat to Israel. Republicans were happy to agree with him.

As a result, the recipients of his largesse were some of the worst Republican candidates ever. In the 2012 Republican presidential primary, Adelson sank $20 million into former House Speaker Newt Gingrich’s campaign, even though Gingrich had little chance of success. Gingrich made opposition to marriage equality a major part of his campaign and was endorsed by the American Family Association, which was designated an anti-LGBTQ hate group by the Southern Poverty Law Center.

All told, Adelson and his wife spent an estimated $93 million on behalf of Republican candidates in the 2012 election. But it was in 2016 where Adelson really made a difference–for the worse.

To say that Adelson helped Trump make it to the White House is not an overstatement. Adelson was Trump’s single biggest financial backer. He dropped $25 million on Trump’s campaign, which was relatively starved for cash.

Of course, Trump’s election was disastrous for LGBTQ people. But Adelson got what he wanted. Trump dutifully moved the US embassy from Tel Aviv to Jerusalem, a long-held wish of Adelson’s. As a bonus, the move was also greeted with cheers by the religious right, which believes that Jerusalem has a special role in end-times theology.

Adelson continued to throw money at Trump and other Republicans. He pledged millions to the Trump campaign last fall. He and his wife gave more than $170 million to GOP-leaning Super PACs in the last election, a record for individual contributions.

It’s entirely fitting that Adelson’s death comes as the Trump presidency is in its own death throes. Unfortunately, the nation as a whole is struggling as a result.