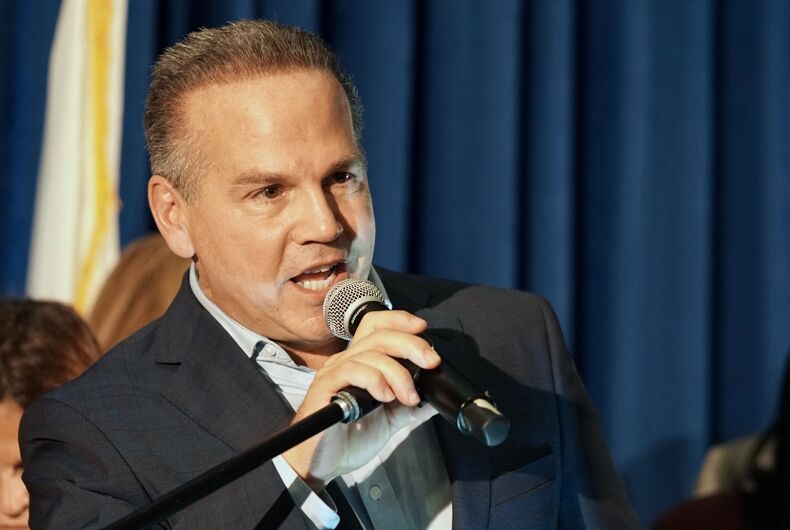 Out Rep. David Cicilline (D-RI) is rounding up votes to impeach Donald Trump for inciting the attempted coup last week where Trump supporters stormed the Capitol in an attempt to execute Mike Pence, stop Congress from certifying the election results, and install Trump as president for at least four more years.

But he’s not without his detractors – the member of Congress has been receiving death threats from rightwingers as he mounts the impeachment effort.

Yesterday, Rep. Cicilline was the lead sponsor of a resolution to impeach Trump introduced in the House of Representatives, which explained that Trump has publicly and falsely stated that he won the 2020 presidential election, attempted to change the results of the election by pressuring state and local officials, and incited a mob to riot in the Capitol last week.

“President Trump gravely endangered the security of the United States and its institutions of Government,” the resolution states. “He threatened the integrity of the democratic system, interfered with the peaceful transition of power, and imperiled a coequal branch of Government. He thereby betrayed his trust as President, to the manifest injury of the people of the United States.”

“You poked the fucking bear this time, you little bitch,” said one of the messages played on CNN. “You poked the bear. You understand what I’m saying?”

“You’ve got 80 fucking million people coming after you, you commie little fucks.”

“If you impeach him, civil war is on, buddy,” said another one.

Warning: CNN cleaned up the language, but the threats are nasty. pic.twitter.com/7iyNHXVZSZ

“They came here to lynch the vice president,” Cicilline said on CNN this morning. “To hang him. To assassinate the speaker of the House. To hunt members of Congress. Five people died. Lots of damage was done. Dozens of law enforcement officers were injured. This was a brutal and violent attack on our democracy and Donald Trump incited this by promoting the big lie that he in fact won the election by millions of votes but it was stolen from him.”

Rep. David Cicilline (R-DI) on the need for impeachment: "They came here to lynch the vice president, to hang him, to assassinate the speaker of the House, to hunt members of Congress … This was a brutal and violent attack on our democracy, and Donald Trump incited this…" pic.twitter.com/gyAZpERDfB

In a New York Times op-ed, Cicilline said that he’s sticking to the resolution because “failing to act would set an irresponsibly dangerous precedent for future presidents who are about to leave office.”

“There can be no healing of the divisions in our country without justice for the man most responsible for this horrific insurrection,” he wrote. “The president must be held accountable. That can happen only by impeaching him for a second time and convicting him in the Senate. A conviction that would allow Congress to prohibit him from ever serving in federal office again.”

“Trump becomes more of a threat to public safety by the moment.”

Cicilline says that Democrats have the votes needed for impeachment in the House.

House Democrats have lined up the votes to impeach Trump a second time, Rep @davidcicilline tells me.

Approximately 220 Dems have committed their support, he says.

“We actually have the votes,” Cicilline tells me:https://t.co/2cGOi5oV2c