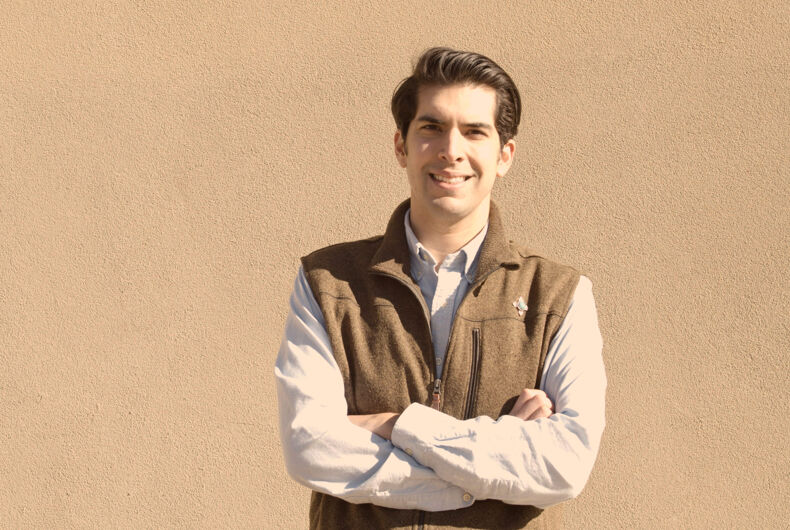 Reyes is currently the Legislative Director for New Mexico Governor Michelle Lujan Grisham. Running in the state’s first district, he is vying for the seat of Rep. Deb Haaland (D-NM), who has been nominated for Secretary of the Interior by President-Elect Joe Biden.

Related: Joe Biden needs to push the Equality Act through in his first 100 days as President

“I grew up probably spending more time in community meetings than I did on the playground,” he told LGBTQ Nation. “My bedtime stories were I Have a Dream and The Gettysburg Address.”

All of this was due to his mother, he explained, who he watched everyday fight vehemently on behalf of students in need in his school district.

He remembers her volunteering to help struggling students learn to read, and giving students rides home so they could avoid walking in 100-degree heat. He remembers waiting with her in the parking lot for the cafeteria workers to finish their shift so she could take them home as well.

He also remembers when she took him to a protest over a bad case of black mold at his school. There, she taught him to be a voice for all students, especially those who did not have the opportunity to speak up on their own.

“So that sense of activism, that sense of giving back to your community, that sense of being there for others, being a voice for the people who don’t have the words or the power themselves, that I will take with me and is ingrained within me, and it’s one of the reasons I had to run.”

As I watch last night of #DemConvention,I’m thinking about how significant it was to have a woman of color speak about climate change on national stage—It’s a subject whose spokespeople have lacked diversity. Thats changing because of people like @Michelle4NM &that makes me proud pic.twitter.com/Vc5qitYWeE

Reyes knows firsthand, he said, about the challenges many in his district are facing. Growing up, his family dealt with substance abuse and often struggled to make ends meet.

“I know what it’s like to be the kid who lies in bed at night stressed out and worried about what the next day looks like because of the insecurities that so many of our families are facing. I am ready to be a voice and to represent everyone, but I especially want to be a voice for the people who feel like they don’t have the words or the power themselves.”

If elected, Reyes will also become the state’s first out congressperson.

“Being able to see someone that is young, that is a person of color that is queer, would have meant a lot for me back [when I first entered politics], he said, “and it means a lot for me now to be able to be that voice and that person in this race.”

Reyes’s priorities in Congress include passing Medicare for All, the Equality Act, and a Green New Deal. He also wants to enshrine the reproductive rights granted by Roe V. Wade into federal statute.

Before working for the Governor, Reyes was the political and legislative director of Conservation Voters New Mexico and also the Campaigns Director for ProgressNow New Mexico. A longtime fighter for reproductive justice, he is also currently the Board Chair of Catholics for Choice.

The majority of Catholics understand that personal healthcare decisions about abortion should remain between women, their families, and their medical providers. Proud to say that President-elect @JoeBiden is amongst them. https://t.co/To0QiBUn6o

Reyes launched his campaign on January 8th, only two days after a mob of violent white supremacists stormed the U.S. Capitol in an effort to stop the confirmation of President-Elect Biden’s electoral votes.

“It’s unbelievable that this could have happened,” he said. “I never thought I would witness something like that in my lifetime. It was an act of domestic terrorism, and I think the President of the United States should immediately be removed from office.”

The horrific event, he said, only strengthened his resolve to run for Congress.

“It made it really clear that who represents us in Washington is critical. We need to continue to have a progressive leader that reflects our values and is willing to fight for us and willing to stand up.”

I don't have to tell you that the events this week have made it clear that it really matters who represents us in Washington. It’s critical that we continue to have a real progressive leader fighting for us. Today, I'm proud to announce my campaign for Congress. #NM01 #NMpol pic.twitter.com/C8WKhcGrlM

Trump Jr whines about his dad’s ban from Twitter: He hasn’t been “killing homosexuals!”