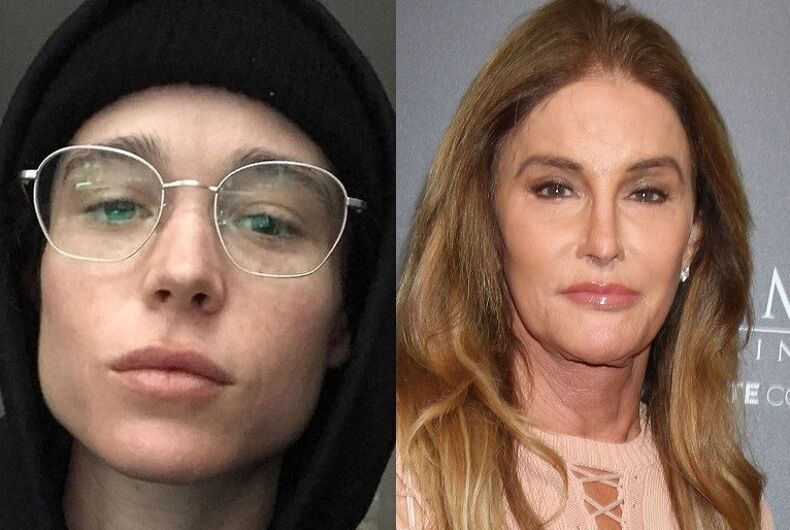 A mere month since Elliot Page announced that he’s transgender, he’s already helping to fight back against anti-transgender legislation in Montana.

Meanwhile, Caitlyn Jenner is wondering why people didn’t show her the same love they’re showing Page, even though she was one of Donald Trump’s most famous LGBTQ supporters in the 2016 elections.

The Olympic gold-medalist appeared on The Skinny Confidential Him & Her podcast yesterday, and host Michael Bosstick wanted to talk about “double standards” and brought up Page.

“I feel like when you transitioned,” Bosstick asked, “but I feel there’s a double standard where, like, you also got a lot of shit from a lot of people that are very supportive of other people in Hollywood who are transitioning but maybe if you don’t fit that agenda or that kind of typecast, if they’re not as forgiving with someone like yourself, and I wonder if you’ve ever thought about that double standard.”

“The trans community is probably more critical than the general public,” Jenner said, and Bosstick brought up Page.

Jenner said that transgender people are more critical of her “being white, I have a job, I’ve been successful, I have white privilege, celebrity privilege, I’ve had every privilege there is in the world. I agree with them, I do, I’ve worked hard my whole life.” None of these things distinguish her from Page.

“And for that, you can’t be a spokesperson for the community. You didn’t live in the gutter, and 25% of all prostitutes are trans women. ‘You didn’t go hooking for a living,’ and this and that, ‘So you don’t understand, you don’t understand,'” Jenner said, paraphrasing what she believes her critics have said.

She said that she thought she “could really make a difference and change the world. In a lot of ways, I did that by just being myself. But, I mean, I tried to do things politically, I was back in Washington D.C. all the time, to try to change things.”

She explained that she had a long dinner with major evangelical leaders in D.C. and that she’s “still friends with some of them. I did a lot of that.”

“It was very disappointing for me,” she said, talking about funds she raised for trans and HIV organizations.

“I would help some of the organizations here in the Los Angeles area. And they would have an event that I would help pay for, and they would ask me not to come because I’m too controversial.”

Then Jenner came to an actual difference between herself and Page: “I’ve always been conservative, more on the Republican side than anything. And I mean, that’s like the taboo, ‘Oh my God you can’t do that, you have to be a liberal Democrat’ and all that kind of stuff. Well, I never have been, never will be. I believe in limited government and all that good stuff.”

Jenner first publicly announced her transition in 2015. Within months she was on The Ellen DeGeneres Show, saying that she’s against marriage equality because “I’m a traditionalist. I’m older than most people in the audience. I kinda like tradition, and it’s always been a man and a woman. And I’m thinking, I don’t quite get it.”

The next year, she got the most attention in the media for her work trying to get transgender people to vote for Donald Trump, saying Trump “would be very good for women’s issues” and that she “would never ever ever vote for Hillary.” Trump arguably ended up hurting transgender people in a way that Jenner’s fundraisers couldn’t make up for.

Page, on the other hand, announced his transition in December and he’s already speaking out against Republican attacks on transgender youth. He asked the Montana legislature last week to “Please vote no on HB 112 and HB 113. These bills harm trans youth and hurt all of us.” The bills would ban transgender girls and women from competing in school sports and ban doctors from providing gender-affirming health care – like puberty blockers – to transgender youth.

“This bill would severely compromise positive health outcomes for trans youth,” reads a sample letter the ACLU of Montana is trying to get voters to send their representatives, an action that Page promoted in the tweet. “Denying best-practice medical care and support to trans youth can contribute to depression, social isolation, and self-hatred. Denying this care would likely raise suicide rates among young trans people in Montana.”

The Juno and Umbrella Academy star has spent years supporting LGBTQ rights, even going on The Ellen DeGeneres Show in early 2019 to basically call out the daytime talk show host for not boldly supporting LGBTQ equality enough.

Instead of saying he opposed marriage equality because he’s a “traditionalist,” Page told Ellen that anti-LGBTQ bias is a “life or death” matter.

“People need to know that when you grow up in a society that makes you feel like there’s something wrong with you, that something needs to be fixed, it’s extremely dangerous and harmful,” he said.

Jenner said that her privileged background – as a celebrity, as a wealthy person, and as a white person – is why she isn’t getting the same warm welcome from transgender and LGBTQ advocates that Page did, but Page is also a wealthy, white celebrity with a job who has worked hard to get where he is.