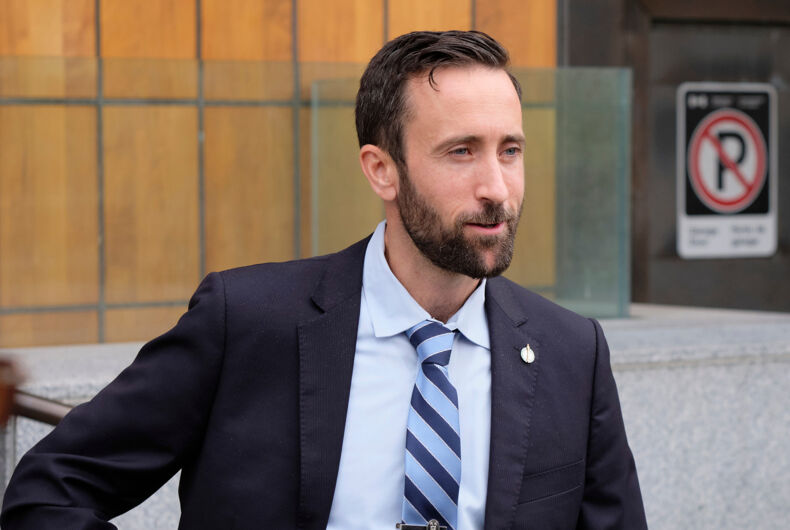 A right-wing politician has been voted out of his party for a series of actions that officials found contrary to their party’s conservative values. That ostensibly includes accepting donations from white supremacists and attempting to protect so-called “conversion therapy.”

Derek Sloan, an elected Member of Parliament (MP) from Eastern Ontario, was ousted from the Conservative Party of Canada by a majority secret ballot cast by his peers on January 20.

Related: Conservatives are freaking out over Biden’s new LGBTQ protections

“The Conservative caucus voted to remove Derek Sloan not because of one specific event, but because of a pattern of destructive behaviour involving multiple incidents and disrespect towards the Conservative team for over a year,” Party leader Erin O’Toole said in a statement.

“These actions have been a consistent distraction from our efforts to grow the party and focus on the work we need to do. Events of the past week were simply the last straw and led to our caucus making the decision it did today.”

Stressing that other social conservatives are welcomed by the party, O’Toole said that “the Conservative Party is a big tent that is reflective of all Canadians. People of all backgrounds have a place in our party.”

Part of the last straw for O’Toole and other Conservatives — known as Tories in Canada — was Sloan’s association with Paul Fromm, a white supremacist and neo-Nazi activist. Sloan accepted a three-figure donation from Fromm and supported his party membership, which came to light after Fromm became a full member of the party, and Sloan admitted he hadn’t properly vetted him.

Fromm is “a Canadian neo-Nazi based in the Toronto area,” according to the Southern Poverty Law Center (SPLC), who has purportedly been denied entry in the United States for his extremist views. That includes leading Nazi celebrations for decades, associating with Ku Klux Klan leaders and once saying that “in gay bath houses, you need a crowbar to separate the men from the boys.”

Global News reports that the decision to oust Sloan was in part due to “pressure” that has come on O’Toole to reject extremism “in the aftermath of riots in the U.S. led by extreme right wing supporters of now-former U.S. president Donald Trump.”

“No matter how callous and misguided today’s actions by Erin and my colleagues were, we have much work to do in the next two months,” Sloan said in response to his removal, advocating for his supporters to stick with the currently-minority party because “the CPC belongs to you – the grassroots of the Party. I encourage you to use your voice, to stand up, and represent true conservative values with this convention.”

Sloan was elected to the House of Commons as a representative of Hastings—Lennox and Addington, a district in the province of Ontario, in 2019. He was the first Seventh-day Adventist elected to a national position in Canada. He will continue to serve as an Independent.

Late last year, Sloan pleaded with supporters, requesting donations so he could supposedly “protect Canada’s kids” from the country-wide proposed conversion therapy ban, currently known as Bill C-6. He claimed that the proposal “criminalizes private conversation and — even worse — would contribute to the massive increase we are seeing with little boys and girls who are being chemically transitioned,” and that people against “gender dysphoria” should find this “alarming.”

“They are saying the only thing we can do is ‘affirm’ these children,” he said in his email to supporters, “through chemical or surgical procedures that have been shown to be irreversible and damaging for many…”

Sloan further alleged that lawmakers “don’t even want to look into what could possibly be causing a skyrocketing level of gender dysphoria in the first place.” He claimed that the C-6 bill would “outlaw prayer,” and that it “amounts to child abuse.” Sloan’s statements were considered both “inaccurate and transphobic” by experts in the effects of conversion therapy.

O’Toole and most of Sloan’s party opposed his position, supporting the conversion therapy ban as proposed. C-6 was overwhelmingly supported in a vote in October, with 308 MPs in favor of it to seven MPs opposed.

Others in Parliament called for the Conservative Party to remove Sloan before, but O’Toole had previously defended his membership in the party. Sloan mentioned his fear that he might be eventually removed from the party.

“You know that I will never back down, no matter the cost,” he concluded at the time.

In other controversial remarks, Sloan previously tweeted that “L-G-B-T-Q is a liberal term” and his belief that homosexuality is a choice, because sexual orientation remains “scientifically unclear.”

John Waters got the opportunity to learn about his ancestry. He’s shocked at what he found.