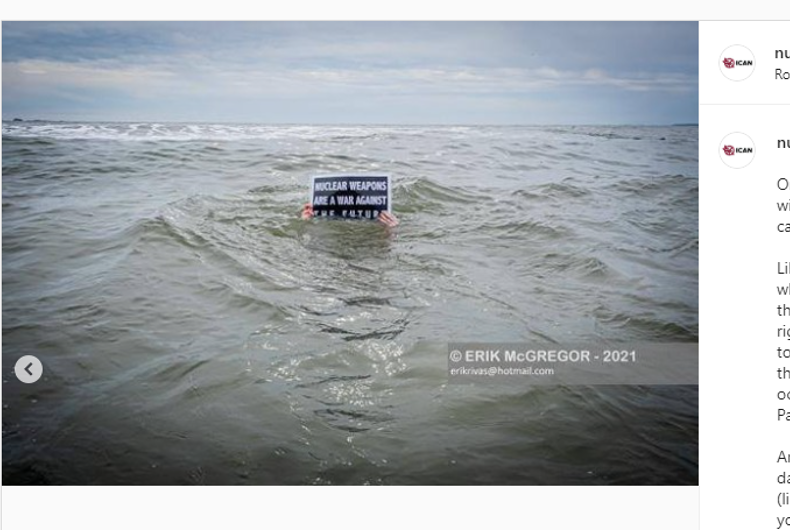 Photo of ICAN demonstration in Atlantic Ocean off of Far RockawayPhoto: Screenshot/Instagram

Several members of the International Campaign to Abolish Nuclear Weapons (ICAN) decided to enter 2021 a little differently than everyone else.

Out activists Brendan Fay and Robert Croonquist, in addition to other New York-based members of the Nobel Peace Prize Laureate group, met in Far Rockaway to dip into the Atlantic Ocean on New Year’s Day. The demonstration was in support of ICAN’s efforts to get government officials such as the New York City Council to support a nuclear ban treaty.

Specifically, ICAN is pushing for the Council to adapt proposals by out gay Councilmember Daniel Dromm that would bring the Big Apple closer to a nuclear-free future. They want action taken both before and when the United Nations’s Treaty on the Prohibition of Nuclear Weapons goes into effect on January 22, 2021. The United States has not signed or ratified the treaty.

In a written statement, Fay declared, “Today we are polar bears for peace.”

“We join this exuberant New Year’s ritual to celebrate life, health, and hope. As disarmament activists, for the sake of children, their future, and love of Earth, we are determined to make our world free of nuclear weapons,” Fay said.

“Besides, this is the inspiring legacy of generations of New Yorkers,” he said, naming late peace activists such as journalist Dorothy Day, former New York City Mayor David Dinkins, and out civil rights legend Bayard Rustin as some of those inspirations.

Croonquist remarked, “Boy, that water was even colder than the Boundary Waters of the Northern Minnesota of my youth. What we do for love!”

He told Gay City News that he participated in the dip while thinking about the future of his former students from his time as a public school teacher.

ICAN works with governments and non-governmental organizations to bring an end to nuclear warfare, doing so — in their own words — “having fun while doing it.”

ICAN won the Nobel Peace Prize in 2017 “for its work to draw attention to the catastrophic humanitarian consequences of any use of nuclear weapons and for its ground-breaking efforts to achieve a treaty-based prohibition of such weapons.”