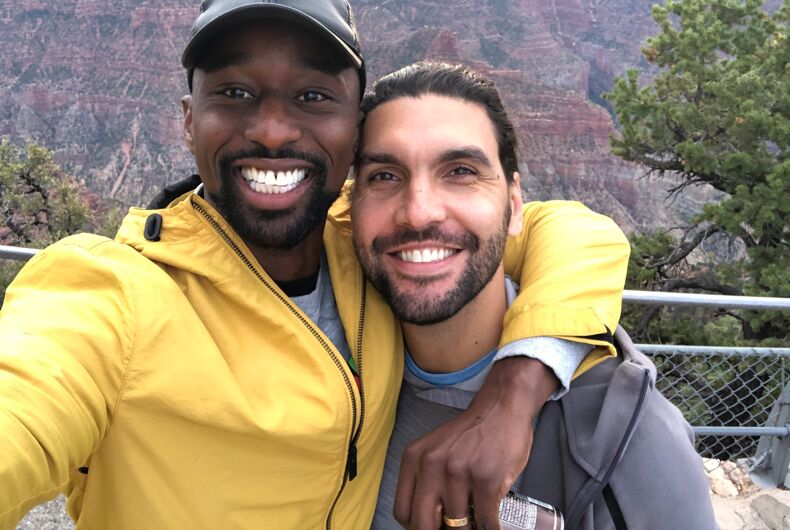 Tee Lam and Adam Motz want to be fathers. A friend agreed to be their surrogate and another would provide the egg.

Their insurance carrier routinely covers surrogacy costs for straight and lesbian couples, so it came as a shock when Blue Cross/Blue Shield denied their claims. Because the two are gay men, the company says they don’t qualify.

The couple’s claims, totaling about $15,000, are related to egg donation. While their policy says that prescription costs for the donor are covered as part of fertility treatment, Blue Cross Blue Shield of Illinois (BCBSIL) has so far refused to pay the reimbursements.

Lam, a property manager, tells LGBTQ Nation that company representatives have told his husband, an Assistant State’s Attorney, “that the reason for our claims’ denial was that we are in a ‘male/male relationship.’ We’ve asked BCBSIL to reconsider its denial, and their rep claims that they are still reviewing the issue.”

After an inquiry from a local NBC station, the insurance company forked over $2,000 to the couple, but Lam says that claim was separate from the prescription claims in dispute.

The company “has given us no reason to believe that they are acting in good faith,” Lam says. “They’ve made promises that they haven’t kept, they’ve been evasive in communicating with us, and they’ve shifted their rationale multiple times in denying the claims. And on two separate occasions (in July 2019 and November 2019), they explicitly stated that the reason we were being denied was that we are a male/male couple.”

Earlier this month, the family of a transgender teen sued the company for denying coverage for his gender-affirming care. The complaint says BCBSIL denied coverage to the young man based on an exclusion in the terms of his health plan, which stated that benefits would not be provided for anything “for, or leading to, gender reassignment surgery.”

“My son needs the medical care that will allow him to live, be healthy, and to thrive,” the teen’s mother, Pattie Pritchard, said. “However, because he is transgender, I have to fight and jump through hoops for him to have access to the care that he needs, is legally entitled to and that he deserves. This denial also sends a message to my son and all transgender people, that their health care needs aren’t real or they’re not worthy of care. I won’t accept that.”

Lam and Motz say they will continue to press the matter until the insurance company does the right thing.

“We are in contact with the ACLU and are determining what the appropriate next step will be. If litigation is necessary, we will pursue it,” Lam told LGBTQ Nation.

The company did not respond to our request for comment.

An anti-LGBTQ extremist now heads the prestigious Voice of America