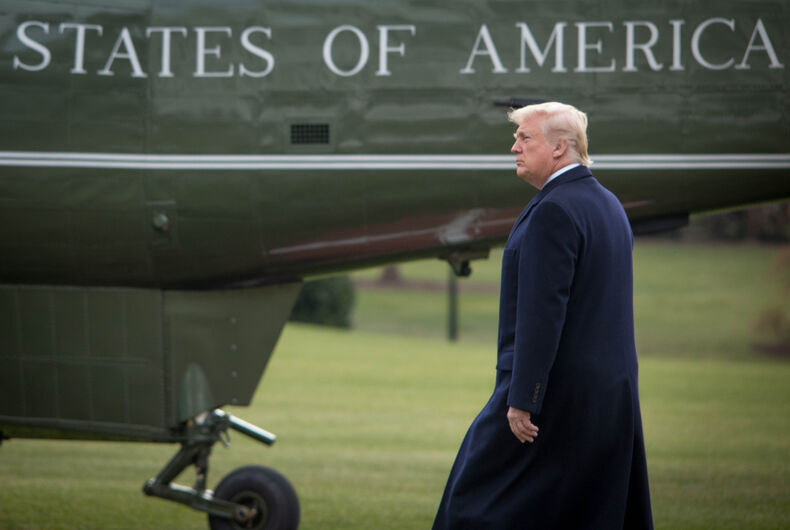 President Donald Trump departs the White House for Palm Beach, FL where he will be spending the Christmas holiday, Friday, December 22, 2017.Photo: Shutterstock

One of the biggest policy differences between President Donald Trump and President-elect Joe Biden is their approach to the coronavirus pandemic. While Biden has promoted responsible prevention measures, Trump has famously ignored his own government’s recommendations and spawned multiple superspreader events infecting followers, politicians, and staff.

So when Biden moves into the White House next month, the presidential residence will be “thoroughly disinfected” before the new First Family moves in.

“It’s a dynamic situation with the pandemic, but I think you’ll see the exact same adherence to and commitment to the science of keeping the team safe that you saw during the campaign and transition, you’ll see that as we enter the physical space,” said Yohannes Abraham, the executive director of the transition, told Politico.

Biden’s team has carefully adhered to best practices when dealing with the coronavirus. The president and his family, several of his top allies and aides, and White House staff have tested positive for the potentially deadly disease after going in the opposite direction.

The virus can live on surfaces for several days, but the president-elect will move in after the Trumps exit the building. White House staff typically work frantically to accomplish the switch out in the few hours both leaders are gone to the inauguration. Adding in extra time for workers to “thoroughly clean and disinfect all furniture, doorknobs, handrails and light switches” and use a “disinfectant misting service” to spray the entire residence to remove any droplets still floating in the air.

Trump frequently refuses to wear a mask, including after testing positive and returning to the building. Staffers have also been encouraged to go maskless.

Multiple events held at the White House have ended with guests testing positive after attending. The president has continued to host holiday parties this year for hundreds of supporters, excusing the decision by saying, “Look. It’s Christmas.”

Biden’s team will go in the opposite direction, testing staff and members of the press daily, enforcing mask requirements, and other best practices. The White House will run on a skeleton crew until it’s deemed safe to return to the building. Most of Biden’s staff currently work from home and have since the pandemic started.

J.K. Rowling says 90% of her fans agree with her transphobia but they’re afraid to say so publicly

Lawmaker who resigned after calling gays “fa***t” gets reelected