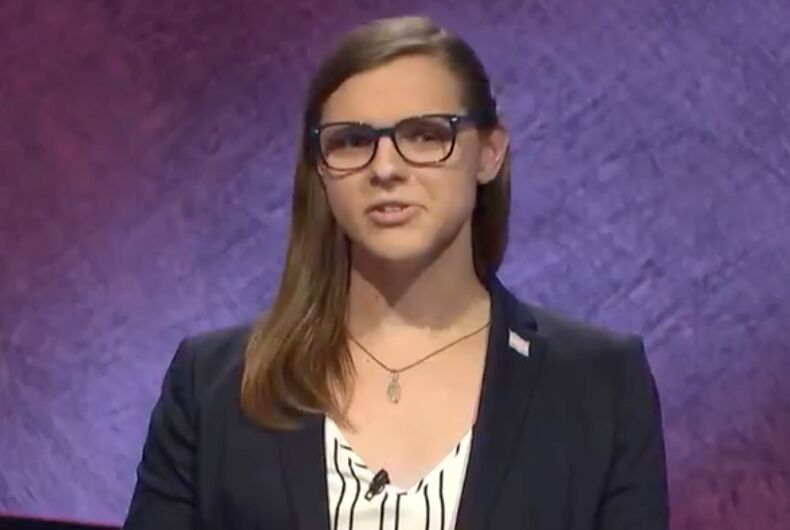 Kate Freeman, a transgender woman from Lake Orion, Michigan became the Jeopardy! champion last Friday but lost the title on Monday night. Freeman wore a trans flag pin to quietly represent the community on the show.

Related: RuPaul was on Jeopardy last night & she won it all

“I spent a lot of time learning about and reflecting on my gender identity in grad school, coming out as transgender and lesbian a few months before graduating,” Freeman told MLive. “I’m proud to be out and I know representation is important.”

“It was really cool to get the behind-the-scenes view of how TV gets made and it was impressive to see how the crew adapted their practices and protocols to keep everyone safe and socially-distant while producing the show,” Freeman said after the show aired.

“Competing was equal parts thrilling and nerve-wracking. Getting that buzzer timing right is so much harder than it seems when watching at home. It really lived up to my childhood dreams of being on the show. I was honored to be able to meet Alex before his passing.”

Contestant Cody Lawrence wore a bi flag pin on his lapel earlier in the week.

In 2019, former contestant John Presloid won America’s heart and some serious cash after casually mentioning his husband while declining to bet big on a Daily Double.

Presloid, who has been out for years, told LGBTQ Nation that “nobody who knows me personally was surprised at all by my statement.”

Presloid pointed out former contestant Louis Virtel who, after becoming internet famous for giving a big circle snap after winning a Daily Double himself in 2015, admitted that his biggest regret was being recognized as a gay man from stereotypes, but never actually saying he is gay.

Trebek died of cancer earlier this year, but the episodes already recorded are continuing to air as a tribute to the beloved longtime host.