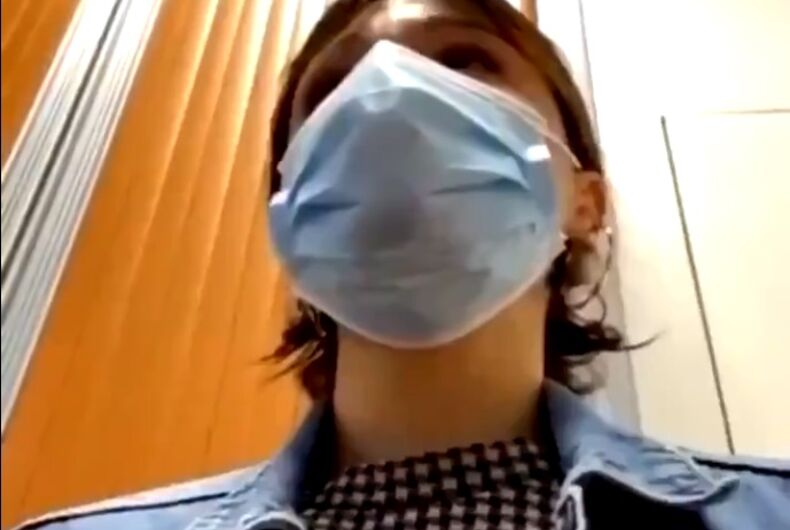 A 17-year-old transgender girl died by suicide earlier this week, just days after she was humiliated by a school administrator for wearing a skirt.

Avril – the first name she went by, according to classmates the French LGBTQ magazine TETU talked to – was a student at Lycée Fénelon in Lille, in the north of France. The school said that they were aware of her transition but a video of her in tears as her guidance counselor scolds her for wearing a skirt shows a deep lack of support in the school.

After that heated conversation with the counselor, Avril was sent home. A classmate told the local outlet La Voix du Nord that she was told not to come back “unless she was dressed like a boy.”

The students said that the incident led to a lot of discussions in class about gender and transgender people and that Avril had the support of many of her classmates.

On Thursday, December 17 – two days after her death – the school district issued a statement that misgendered the girl, saying that she wanted to “change sexual identity” and that she was “supported in their process.”

“Valérie Cabuil, superintendent of Lille schools, learned with great sadness that a high school senior at Lycée Fénelon in Lille put an end to their life at their home in a youth shelter on Wednesday,” the statement said, using the masculine article “un” in front of the word for “student,” misgendering Avril. The statement stressed that Avril was living in a youth shelter, not with her parents.

“This dramatic event has upset the entire educational community,” the statement continued. “Grief counselors have been sent to the school.”

The statement led to an outcry on Twitter after a series of tweets sent by a transgender community advocate accused the school administration of “psychological violence” for “humiliating” the teen, according to the French LGBTQ website Komitid.

“A transgender teen girl died by suicide Tuesday,” Moreno wrote. “The suicide rate for transgender people is seven times higher than the average. We absolutely need to fight against transphobia, everywhere.”

While he confirmed to the press that Avril was sent home that day because she wore a skirt to school, he said that she had “other difficulties” and also noted that she lived in a youth home, implying that she had been rejected by her family.

Acknowledging that “a discussion took place” on December 2 about Avril wearing a skirt, he said “no element of that day” is linked to her death.

“We are alerting the Education Ministry tonight about the situation for trans children and teens: without special attention, discrimination and acts of violence leave permanent marks with serious consequences,” said the transgender organization Acceptess-T in a series of tweets.

“We must at all cost prevent these situations with a real engagement from the government,” the group continued. “We have to give transgender children and teens the possibility of a future where they won’t have to constantly fight to survive.”