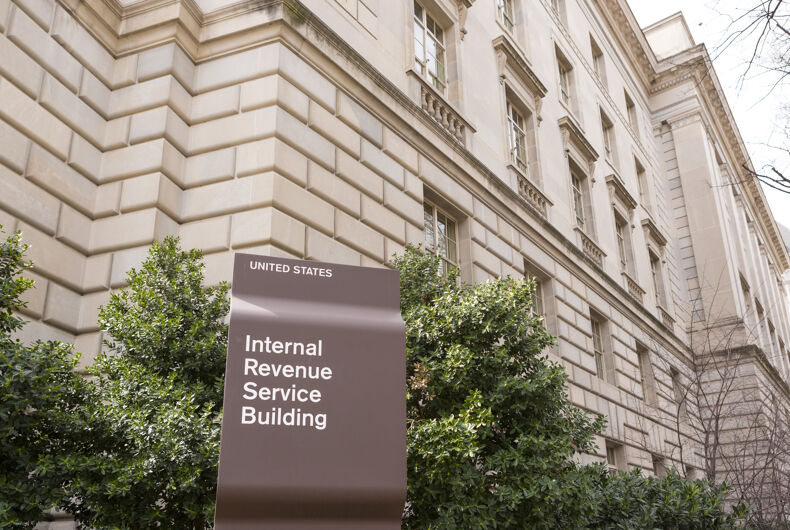 Do you have a group that promotes white supremacy? Anti-LGBTQ hatred? Islamophobia?

The IRS would be happy to denote you as a charity, with all the tax benefits — and millions in savings — that implies.

A search of the IRS’s charitable groups found that 90 of them are hate groups as designated by the Southern Poverty Law Center (SPLC). In other words, extremist groups get to call themselves charities, avoid paying taxes and even have donations designated as tax-deductible.

Brandon Wolf, a survivor of the Pulse nightclub massacre, told CBS News that the IRS is essentially complicit in the spread of hate in the country.

“When you choose to write hate a blank check in the United States of America instead of exercising oversight over it, you get communities torn apart,” Wolf said, “you get people grieving and mourning. This is the human cost to hatred.”

Among the anti-LGBTQ hate groups that the IRS considers legitimate charities are the American Family Association, the Family Research Council, and Liberty Counsel. They join white nationalist groups like the VDARE Foundation, the New Century Foundation, and the National Policy Institute as beneficiaries of the IRS’s lax oversight. Altogether, the hate groups have received millions in tax benefits over the past decade.

While the IRS’s generally hands-off policy on who qualifies as a charity is a result of the agency’s effort to appear neutral, it has occasionally denied tax-exempt status to certain far-right groups.

Now, the agency’s essentially blessing the work that the groups are doing. “They’re endorsing hate groups with dollars,” Phil Hackney, a former IRS attorney who is now an Associate Professor of Law at the University of Pittsburgh, told CBS News.

Hate groups masquerading as charities isn’t the only problem with the IRS’s policies. Right-wing political groups are calling themselves churches so that they can reap the tax benefits that come with that designation. The added benefit: they can hide their donors from the public.

Focus on the Family employed novel reasoning to achieve this goal. It claimed its employees were the “ministers” and the “congregation.” Their work? That’s actually “worship.” The group’s cafeteria, that’s the “place of worship,” because “services” are held there.

Whether any of this can be changed by the incoming Joe Biden administration or a potential Democratic-leaning Senate is uncertain. Either way, the outrage over the Tea Party groups controversy likely means that the IRS will remain leery of wading into the principles that motivate charities.

Moreover, the agency has been chronically starved of money by Republicans, leaving it a shell of its former self.

Unsurprisingly, the biggest beneficiaries of the funding cuts have been wealthy individuals and corporations, who are far less likely to be audited than they once were. From a Republican point of view, that may be a win-win: let right-wing groups reap tax benefits, and let wealthy tax dodgers off the hook.