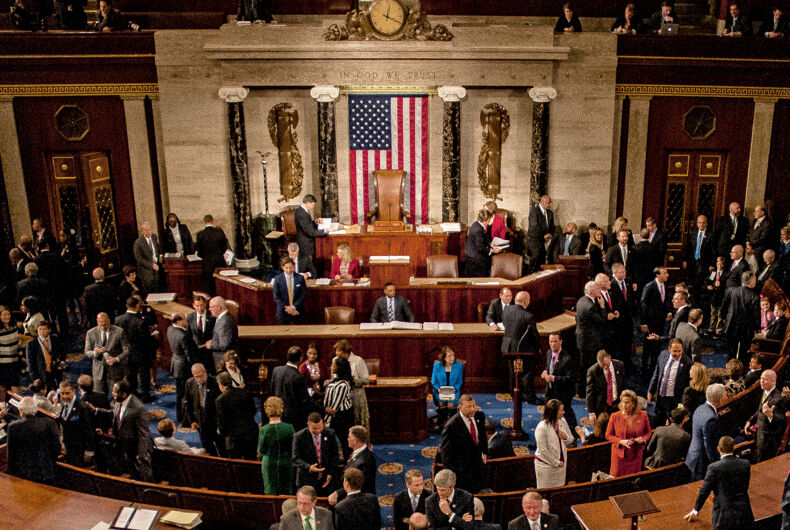 President Donald Trump’s nominee to the U.S. Court of Federal Claims, Stephen S. Schwartz, was confirmed by the U.S. Senate on December 8.

Schwartz’s key resume points include being the attorney who represented the Gloucester County School Board in Virginia, which sought to prevent trans student Gavin Grimm from legally using the bathroom that aligned with his gender identity in school. Schwartz then went to represent the state legislature of North Carolina in court, against challenges of the state’s H.B.2 law that explicitly banned people from using bathrooms in accordance with their gender identity.

This was Schwartz’s third nomination for a spot on the bench by Trump, after his first two attempts were returned by the Senate Judiciary Committee in January 2018, and January 2020. This time, Schwartz’s nomination was initially declined by the committee, but the Senate invoked cloture on December 7, meaning all 100 senators were pressed to cast a vote.

Schwartz’s nomination came down party lines. He was confirmed 49 to 47. He will take the seat vacated by Judge Marian Blank Horn, who received Senior Judge status in 2018.

It's despicable that this anti-civil rights nominee has been confirmed in the midst of a public health & economic crisis. #NoMoreTrumpJudges pic.twitter.com/kJf24Ft5Yd

A term on the Court of Federal Claims, which hears any monetary disputes involving the U.S. government or funding from under the Constitution, is for 15 years. Their jurisdiction is equivalent to that of a case that is bought to a U.S. District Court.

Schwartz refused to answer, in detail, questions related to representing Gloucester County or North Carolina when directly asked by the Senate.

He did, however, share in his written response that while he has “been associated with political controversy,” he believes it will not affect his ability to serve as a judge.

“Like many judicial nominees, I have represented a wide variety of clients in cases involving a wide variety of issues,” he wrote, “…I have been both aligned with and adverse to the federal government’s positions at various times.”

In both of his notable instances defending anti-LGBTQ positions, Schwartz was on the losing end of the gavel. A panel of judges from the Fourth Circuit Court of Appeals ruled that Gloucester County’s decision was prohibited under Title IX, and that decision was upheld when the full Court declined the case, again, this August.

The Fourth Circuit Court ruling was binding throughout the entire Circuit’s jurisdiction, which included North Carolina. Within the next year, North Carolina’s legislature and newly-elected governor reached a compromise and removed the bathroom access provisional ban, but not after they lost millions of dollars in business, ranging from deals with major sports organizations like the NCAA and NBA to interstate travel bans instituted by California, New York, the District of Columbia, Atlanta and others. The state faced a federal lawsuit until Donald Trump dropped it in his first months in office.

The provisions in HB2, which prevented any other anti-discrimination laws that protect LGBTQ people from being passed within the state, remained intact until last week.

Stephen Schwartz is yet another radical, right-wing, unqualified Trump judicial nominee. I oppose his confirmation. https://t.co/45ZTiGn6MQ

Republicans are breaking Senate norms by moving in a lame duck session to confirm a far-right ideologue to the Court of Federal Claims. Stephen Schwartz’s views on a number of issues including Social Security and LGBT rights are troubling and his nomination should be rejected.

“Schwartz has made his career by actively working to undermine LGBTQ rights,” Alphonso David, President of the Human Rights Campaign, said in a statement. “Schwartz is unqualified and unfit for any court, yet the Republican leadership in the Senate is attempting to advance his nomination through the lame duck with only days until President-elect Biden takes office.”

Lambda Legal senior counsel Sasha Buchert stated that this was “another dark day for the U.S. judiciary and the latest attack on LGBTQ people from the Trump-Pence Administration,” and that “Schwartz ranks at the top [of worst Trump court nominees] because of the extreme damage we know he would inflict upon our communities and institutions.”

Stephen S. Schwartz is not to be confused with Stephen Schwartz, the composer of hit Broadway musicals such as Wicked!, who vehemently opposed HB2 to the point he refused his work to be performed in the state.

Jamie Manson is an out & devoted Catholic. She’s still fighting for the church to change.

The Electoral College is now the weak link in American democracy