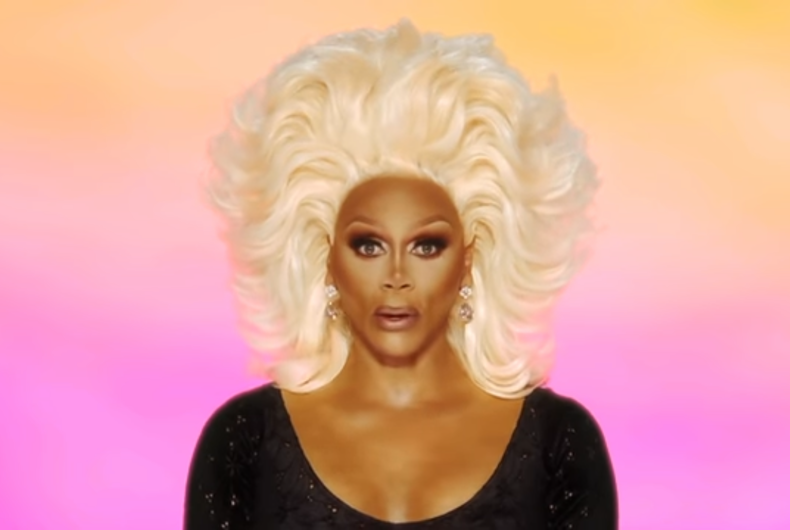 The newest season of RuPaul’s Drag Race is premiering on New Year’s Day, and the show has unveiled an extended look at the first episode.

In the 10-minute preview of the episode’s opening act, part of which leaked online earlier this month, a new development comes to light: RuPaul has traded in his former tag line for a new, more inclusive one.

This season was already primed to be more progressive than previous cycles, as GottMik, the first trans masculine contestant in the show’s history, is participating.

GottMik won’t be the first transgender person on RuPaul’s Drag Race – several contestants have come out as transgender, non-binary, and gender fluid during or after their appearances on the series. But they will be the first person assigned female at birth to compete on any iteration of the show.

The drag competition is also airing on broadcast television for the first time in history, meaning you don’t have to have cable to watch the show.

In the preview, only two of the competing queens are unveiled before RuPaul calls them to the main stage. They’re bought out to “lip sync for their lives,” between the two of them.

RuPaul then unleashes a new catchphrase. Normally, Ru would lead into a competition by saying, “Gentlemen, start your engines, and may the best woman win.”

Instead, RuPaul says: “Racers, start your engines, and may the best drag queen win.”

The judges, socially distanced and separated by glass, are then unveiled. Michelle Visage, Ross Mathews, and Carson Kressley. Then the two racers, Joey Jay and Kandy Muse, have to duke it out in a one-on-one lip sync battle, as opposed to the typically more crowded competition between multiple racers on the main stage.

After they perform to “Call Me Maybe” by Carly Rae Jepsen, RuPaul tells them, “I’ve made my decision.” Then, the preview ends.

The anticipation for the episode, and the excitement around Ru’s new non-gendered phrase earned the internet’s praise.

I’m glad RuPaul is acknowledging that a trans queen is on this season by saying ‘May the best drag queen win!’ Instead of ‘May the best woman win’ #DragRace #RPDR pic.twitter.com/KtJYNff4SZ

Previously, RuPaul changed the wording of the phrase to “ladies & gentlemen” in the fourth cycle of Drag Race All-Stars, after Gia Gunn came out as a trans woman. Ru also dropped the “you’ve got she-mail” catchphrase from the show after backlash over it, and issued an apology.

Variety also unveiled that there will be a virtual brunch with the new queens, in addition to RuPaul’s Drag Race alum like Honey Davenport and Bianca Del Rio, to celebrate the new season’s launch. Fans can enter for a chance at an exclusive invite at newyearnewru.com, but have only until December 30 at 12:00 P.M. Eastern.

The first episode will premiere on January 1 at 8:00 P.M. Eastern time, or 7:00 P.M. Central time, and 8:00 P.M. Pacific Time, on VH1  — simulcast to parent organization Viacom’s five other networks: MTV, MTV2, PopTV, Logo, and the broadcast network The CW. The backstage show Untucked will only premiere on VH1 at 9:30 P.M. Eastern.