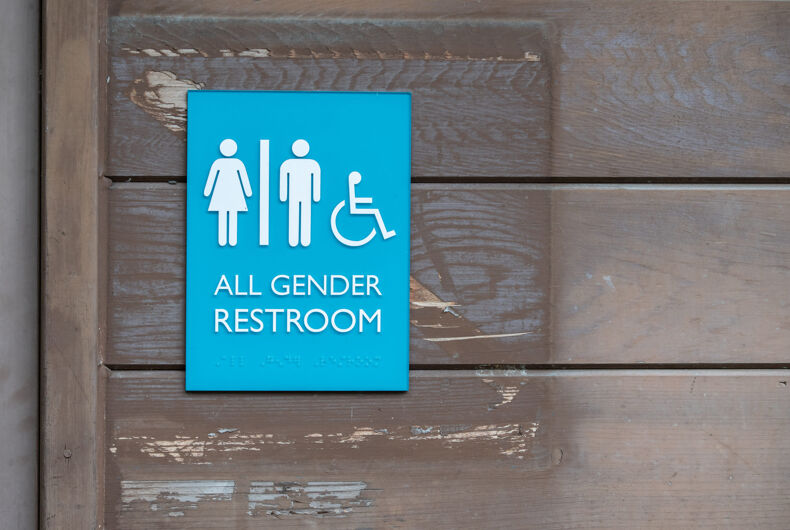 The state of New York has enacted legislation that will require public, single-occupancy bathrooms to become available to all people, regardless of their gender. This means trans, non-binary and gender non-conforming people in the fourth-most populous state in the United States can use such facilities without restrictions.

Governor Andrew Cuomo (D) signed the bill on December 23. It affects buildings belonging to school districts, charter schools, state or community colleges, restaurants and bars, mercantile establishments, factories, and any others that are state owned or operated.

Gov. Cuomo’s signature comes after it passed both the state assembly and senate in July. More than 100 LGBTQ groups expressed their support for the legislation in an open letter earlier this month.

Out state Assemblymember Daniel J. O’Donnell (D), who initiated the law that bought marriage equality to New York State, and state Senator Julia Salazar (D) were the chief sponsors of the proposal. It was first introduced by O’Donnell in 2017, before being reintroduced in the Assembly in February 2019. Salazar bought the proposal to the Senate in June 2019.

“This doesn’t cost anybody any money,” O’Donnell previously said on the proposal. “If you unscrew the ‘M’ and the ‘W,’ then you’ve complied with the law.”

Vermont, Illinois and California already have proposed and passed similar laws. Many sought such proposals to counteract laws, like those once enacted in North Carolina and Texas, that sought to restrict bathroom facilities based on sex.

“This isn’t just about restrooms,” O’Donnell wrote in a thread of tweets. “It’s about transgender, gender nonconforming, and nonbinary peoples’ right to be themselves anywhere in New York State.”

O’Donnell said the bill passed the Assembly unanimously months ago, and the state senate website reflects that it passed with a large margin there due to bipartisan support, 52-8. It was then delivered to Gov. Cuomo, and he had until Christmas Eve to sign it into law or return it.

“Our trans, gender-conforming and non-binary siblings deserve to feel safe and be affirmed,” said Brian Romero, President of the Stonewall Democrats of New York City, on Twitter.

It becomes enforceable starting in 90 days from its enactment, so as early as late March, according to the text published by the state senate.

NEWS: My bill w @JuliaCarmel__ making all single stall bathrooms gender neutral has been signed! This bill is now law.

But this isn't just about restrooms. It's about transgender, gender nonconforming, and nonbinary peoples’ right to be themselves anywhere in New York State. pic.twitter.com/2FUgCB2iue

It’s simple: Transgender, gender nonconforming, and nonbinary people have the right to exist in the world, with safety, protection, and affirmation. Period. #TransRightsAreHumanRights

Delighted to say that tonight @NYGovCuomo signed the bill that @Danny_ODonnell_ and I sponsored to provide safety and respect for transgender, gender nonconforming, and non-binary people in New York.

Thank you to everyone who helped make this happen. 🎉

Thank you, @NYGovCuomo for signing A5240/S6479 (@Danny_ODonnell_ /@SalazarSenate) into law. NYS will now make all single-stall restrooms in businesses and public places gender-neutral.

Congratulations to all the advocates who made this happen! 🎉🌈

We applaud @NYGovCuomo for signing A.5240/S.6479 into law to broaden the accessibility of gender neutral bathrooms statewide. This common-sense measure makes it that much easier for everyone to access public accommodations wherever they are with less fear of discrimination. pic.twitter.com/VzTFv13I9M

I am deeply grateful to the groundswell of support from trans organizations and LGBTQ groups across New York State who spoke out to ensure this bill became law.

Because you spoke up, TGNC New Yorkers won. Thank you.