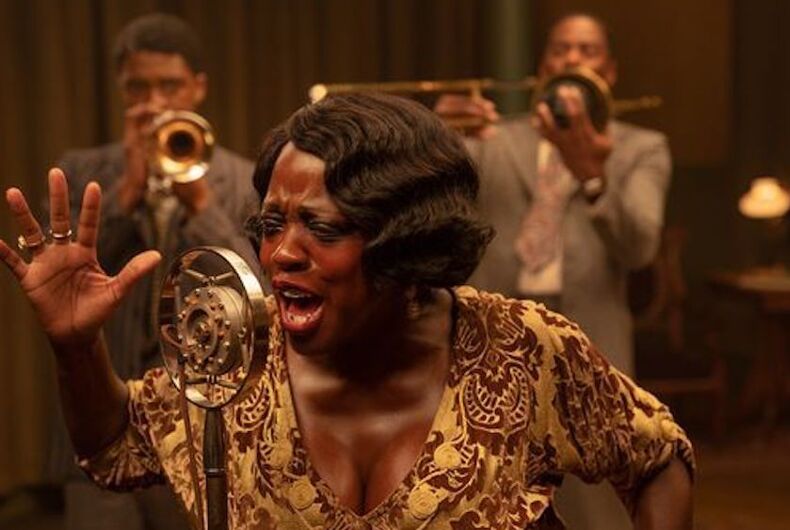 It’s been a tough year for movie studios too, with fewer LGBTQ films released in 2020 than in recent years. Thankfully, this year’s best consistently used charming characters, surprising plots, and sparkling moments of grace and humor to bring some much-needed human warmth to a cold year.

Five of the films on our list of the 10 best LGBTQ movies of 2020 focus on lesbian and bisexual women. Many use comedy. We also included films with racial diversity and those that explored queer culture in unique and important ways.

Whether you want holiday comedies, historical romances, family dramas, heart-rending documentaries, or just a campy horror flick, these 10 best LGBTQ films of 2020 will charm and keep you cozy well into the new year.

Fans of this landmark gay holiday comedy were divided over its premise: A young woman visiting her girlfriend’s family for Christmas is asked (at the last minute) to play straight because she’s not out to her family.

But the potentially painful plot is kept lovingly light by a capable cast, including butch-heartthrob Kristen Stewart, the wry Aubrey Plaza, and Schitt’s Creek co-creator Dan Levy as Stewart’s joke-cracking gay BFF. Together, the comedic cast keeps the film centered on its true message: reclaiming your spirit when loved ones fall short.

(Happiest Season is available on Hulu)

Gay screenwriter Alan Ball, known for his very gay creations like the vampire drama series True Blood and the surprisingly closeted 1999 flick American Beauty, creates a charming set-up with this tale set in 1969. In it, the titular uncle must return from his teaching job in New York City to his bigoted South Carolina family after the family patriarch dies.

While the film falls into several facile Hollywood tropes, it accurately portrays Frank’s cruel Christian family, the lifelong effects they’ve had on him, and Frank’s realistic relationship with his Saudi Arabian boyfriend, Wally. Together, Frank and his young niece learn how to live authentically despite losing so much because of it.

You might expect a documentary on transgender portrayals in film to be seriously depressing considering the many times trans people have been depicted as psychopaths, punchlines, and punching bags. But Disclosure lightens the load with witty highlights of trans characters from classic films and lots of bright commentary by trans celebrities like Laverne Cox, Lilly Wachowski, Chaz Bono, and many others.

The film makes a convincing argument that media teaches others how to treat trans people. The result is a lean and surprisingly funny documentary that belongs right alongside its 1995 gay counterpart, The Celluloid Closet.

(Disclosure is available on Netflix)

For years, the Head of the Chechen Republic, Ramzan Kadyrov, has denied that his secret police have been kidnapping, torturing and killing his country’s LGBTQ citizens. But this film shows the terrifying journey of real-life queer Chechens trying to escape his cruel campaign by literally fleeing for their lives.

David France — director of the queer documentaries How to Survive a Plague and The Death and Life of Marsha P. Johnson — weaves together footage from hidden cameras and cell phones with deep fake technology meant to conceal the survivors’ identities. What emerges is a compelling and important documentary that brings the international issue into the mainstream and feels like a terrifying action movie.

(Welcome to Chechnya is available on HBO Max and Amazon Prime)

Even though flashy TV psychic Walter Mercado is much beloved in the Spanish-speaking world for his dramatic astrological readings and lavish Librace-style outfits, he has remained relatively unknown to English speakers… until now.

This documentary provides a glimpse into his flamboyant public persona, the legal battles that preceded his final enigmatic years, and the legacy he left for his home island of Puerto Rico and queer mystics around the world following his death in November 2019.

Directed by gay theater director George C. Wolfe and based on straight playwright August Wilson’s 1984 drama of the same name, this film focuses on bisexual Black jazz icon Gertrude “Ma” Rainey, the real-life “Mother of the Blues.” She flaunted her success and interest in women throughout the 1920s and ’30s, when Black Americans were still figuring out their post-slavery identities in an enduringly racist country.

Related: In 1928, the ‘Mother of the Blues’ recorded an amazing lesbian anthem

Admittedly, this B-grade flick lacks the same acting quality and production value of the other films on this list, but its spirit is a reminder that indie queer cinema’s not dead and that very few of us got to celebrate Halloween (aka “queer Christmas”) this year. Plus, it’s the only horror movie on this list.

A masked serial killer known as The Vampire is using a hook-up app to kill patrons of the Providence, Rhode Island gay bar The Outhouse just as the bar’s legendary Halloween party is ramping up. Crooked cops, cutthroat drag queens, humpy go-go boys, shady banter, and unabashed sex and drug use present a grotty side of gay life largely put on hold during the quarantine and altogether hidden from other (ahem) “respectable” LGBTQ films.

The Half Of It

A queer take on Cyrano de Bergerac, this film features Ellie Chu, a bookish and friendless 17-year-old Chinese-American high schooler in the small fictional town of Squahamish, Washington. An outcast in a predominanty white community, she makes money writing essays for her disinterested classmates.

However, when Paul Munsky, the sweet but shy football player, asks Chu for help writing love letters to his female love interest, Aster Flores, Chu begins sending Flores messages on Munsky’s behalf, only to gradually realize her own feelings for Flores. Admitting them could mean outing herself to the entire town and risking her growing friendship with Munsky.

This sweet teen drama, its Asian lead, its Hispanic love interest and its light touch on the complexities of being different in a predominantly white, straight, Christian community will remind viewers of the sweet and sour moments of queer adolescence.

(The Half of It is available on Netflix)

Part con-caper, part family-drama, Kajillionaire follows Old Dolio Dyne, a 26-year-old who has spent her entire life serving as an accomplice to her low-rent con-artist parents. Together, they endlessly connive to scrape together an existence in California.

But when her father is unable to pay $500 rent on the family apartment, a small office next to a soap factory, they’re forced to hatch new schemes, including a travel insurance rip-off and theft from senior citizens.

When Dyne meets Melanie, a young optician’s assistant eager to help the family in its two-bit cons, Dyne realizes she wants far more love than her plotting parents have ever provided. The family’s nonstop schemes provide comedic surprises and Dyne’s bursts of emotion give the film its true heart as she yearns for a love she’s never known.

(Kajillionaire is available on Vudu, Amazon Prime, and iTunes)

An 1840s romance ignites between real-life paleontologist Mary Anning (played by the ever-expressive Kate Winslet) and Charlotte, a young wife who has grown despondent to her wealthy but preoccupied husband.

When Charlotte’s husband offers Anning money to let his wife tag along as her as a fossil hunting companion on England’s cold ocean shore, neither Anning nor Charlotte seem particularly happy about it. But left to their labors, the two women realize how much they need one another’s company, and their love threatens to upend their lives in a male-dominated society.

The film’s writer and director Francis Lee, has admitted that there’s no historical evidence of Anning’s sexuality, leaving him free to re-imagine her as a lesbian, especially since so many queer figures have routinely been “straightened” out throughout history.

(Ammonite is available on Vudu, Google, and Amazon)

The pandemic is hitting LGBTQ families harder than straight people