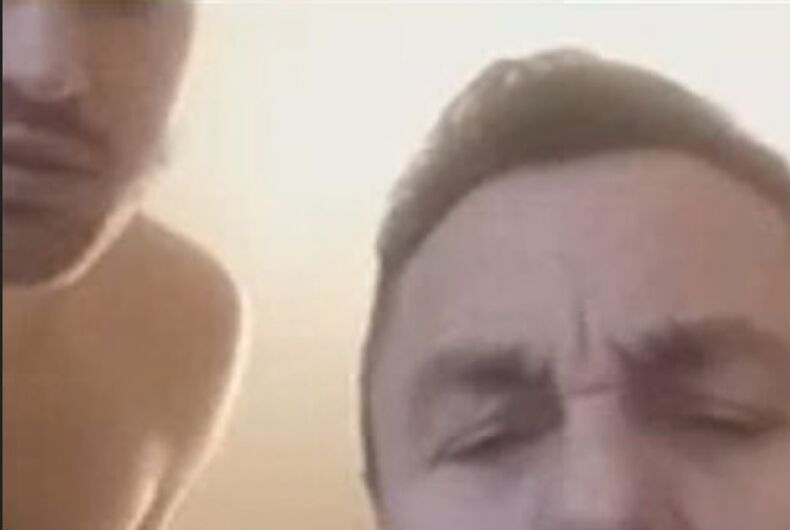 Petras Grazulis and the man (or ghost?) during the Zoom meeting.Photo: Screenshot YouTube

A conservative lawmaker with a history of extremely cruel anti-LGBTQ statements was caught with a half-naked, much younger man in his home during an official Zoom conference and now he’s scrambling to explain what the mysterious man was doing in his home.

Lithuanian member of parliament (MP) Petras Gražulis was in a Zoom meeting for the culture committee when a much younger man who is at least shirtless appeared beside him briefly peering at the screen. Now the clip is making the rounds on social media and Gražulis is coming up with increasingly bizarre explanations of what the young man was doing there.

At first, according to the local newspaper 15min, Gražulis said that the young man was his son. On Thursday, though, he said that after he reviewed the video, he noticed that it wasn’t his son but Lithuanian journalist Andrius Tapinas.

“Yes, I said it was my son, but after watching the video better, I can guarantee that it’s Andrius Tapinas,” Gražulis said. “He haunts me everywhere, so it’s not surprising that he was there.”

He did not explain how the journalist appeared in his home office, why the journalist was shirtless, or how he couldn’t tell the difference at first between his son and a journalist.

Moreover, people noticed that the young man in the video doesn’t look anything like the 43-year-old divorced father-of-two Tapinas.

Later, in the Seimas – Lithuania’s parliament – he was giving a speech and digressed into talking about the incident and at first said that he “didn’t even notice” the half-naked man until he saw the video of the meeting.

“To keep you all from asking the same question,” he told the Seimas, “I will just tell you. Ten other MPs already asked me that question. It was Andrius Tapinas, it was really Andrius Tapinas. If you don’t believe me, just ask him.”

“It is the responsibility of each MP to ensure that no one else appears on the screen,” said committee chair Vytautas Juozapaitis. “But we must ask: Why were they half naked during work hours? Of course, it’s his private life, but it happened during an official meeting.”

In 2010, Gražulis introduced legislation to make it illegal to “promote” homosexuality in an attempt to ban Pride parades. The law would have imposed fines to “punish almost any public expression or portrayal of, or information about, homosexuality.” Amnesty International denounced the measure at the time.

A 2007 article by PinkNews said that Gražulis responded to a survey about LGBTQ rights by writing: “I support the position of the [Catholic] Church, there is no doubt about it. These people are indeed sick and perverted. They pose a threat to society because they molest children.”