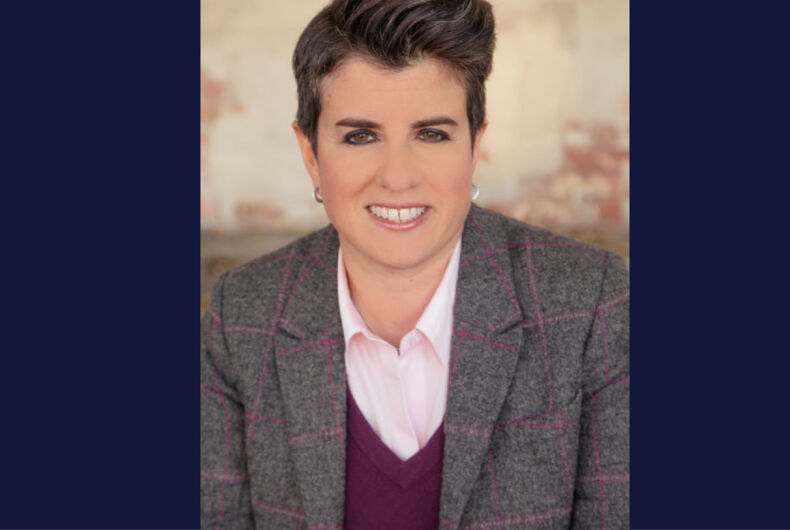 At fourteen years old, Jamie Manson felt like she had a calling to become a Catholic priest. Because she was a girl though, she was laughed at and ignored.

“But I kept persisting,” Manson, now an out lesbian, told LGBTQ Nation.

She never did become a priest, but has instead built a career on fighting for progressive change in Catholicism, first as the only out lesbian journalist in Catholic media in the world, and now, as the new President of Catholics For Choice, a Catholic organization fighting for total reproductive freedom around the world.

“We see the suffering that happens globally when women and people of other marginalized genders and families cannot access the family planning techniques they need,” Manson explains, citing that many still “cannot access abortion, and need information about sex and sexuality.”

Contrary to popular belief, a recent survey by Catholics for Choice found that most Catholics do support abortion rights and reproductive healthcare access. The misconception largely remains, Manson believes, because the influence of the Church leads many Catholics to keep their support for reproductive freedom under wraps.

“I’m always amazed at the power of the issue of abortion,” she said, “How taboo it remains, how stigmatizing it remains. Even among Catholic theologians I know, people of the Church I know, politicians who do believe in abortion rights, [they] will not speak about it for fear of backlash from the minority, but the very vocal minority who are very well mobilized and organized.”

Pope Francis needs to spend less time watching mafia movies and more time dialoging with real life women who have faced the choice of having an abortion.

All this twisted analogy does is create shame and distort reality.https://t.co/LS3yhZCqDZ

Pro-choice religious people, she added, are “the sleeping giant of the pro-choice movement,” and they need to be able to speak up without fear.

Manson assumed the role of Catholics for Choice President in October. She called it a “dream job.”

“As a queer woman in Catholic spaces all her life, I had very few chances for leadership. I had all the abilities. I had the skills, but they were just incredibly underutilized. So this was the first time I had the chance to be in a Catholic space and be a leader.”

She has many goals for the organization, including raising awareness of the intersections between reproductive justice and LGBTQ rights.

“I really want to find ways to [demonstrate] the fact that we have a deep, profound, shared vulnerability, women and LGBTQ people…Because our rights are all in danger, especially with these rights to refusal and these exemptions that these religious entities are seeking out.”

Thrilled to be quoted here:

“Even for people like me, who are out loud and proud, there’s always going to be that element of shame, of not being legitimate, of your love not being worthy to be blessed by God in the church of your childhood.”https://t.co/bJvC11i9J6

In an op-ed for LGBTQ Nation published this November, Manson discussed the recently argued Supreme Court case, Fulton v. Philadelphia. This case will determine if a Catholic foster services organization (that is also a government contractor) can deny same-sex couples the right to adopt children.

In the article, Manson outlined that in cases like this, there will likely be significant consequences of the Supreme Court being dominated by right-wing Catholics. She also explained how the Fulton v. Philadelphia decision could effect reproductive justice.

“If the Supreme Court rules in favor of the plaintiff,” Manson wrote, “it could give a wide range of government contractors the ability to discriminate if the organization’s owners claim a religious justification for that discrimination. This right to refuse services…would also have massive implications for other vulnerable communities, particularly women and other marginalized genders, who seek out health care and other social services provided by religious entities.”

Manson describes herself as having “one foot in and one foot out” of the Church, but despite the challenges of being a queer Catholic woman, she said there are a few reasons she has not abandoned the faith as of yet: “On good days, I keep up the fight because there’s something to me very good and very beautiful and very true about the Catholic tradition…

“Catholics have this sense of the sacred, that sacred is all creation, that God is breaking through to us in people and in places and in things at all times. We have this very vivid imagination about God. Catholics actually think we are co-creators with God.”

Detained women are enduring forced sterilizations. Why is the “prolife” movement silent? Why aren’t the bishops and right-wing Catholics crying out for justice over these attacks on motherhood?https://t.co/MfZpCMmtgf

This idea, Manson believes, has helped her make sense of the suffering in the world — but, “On my bad days,” she said, “[I stay] because I see the power that the institutional church has over the lives of LGBTQ people and women, and its harmful and menacing… This institution has enormous global power, and you can’t look away from that. So on my tougher days, I’m like, no this thing is a force and a force for enormous harm for women and for LGBTQ people, so I have to keep fighting and raising that awareness.”

As for any backlash she faces — or may face — Manson is unfazed. “I have a maybe irrational belief that I am correct. And I base it off the suffering. I do this work because people are suffering,” she explained.

“Women and people of marginalized genders and queer people are suffering at the hands of pervasive, globally influential Catholic doctrine. So if I get down, I think about the suffering, and that keeps me going. It really does.”