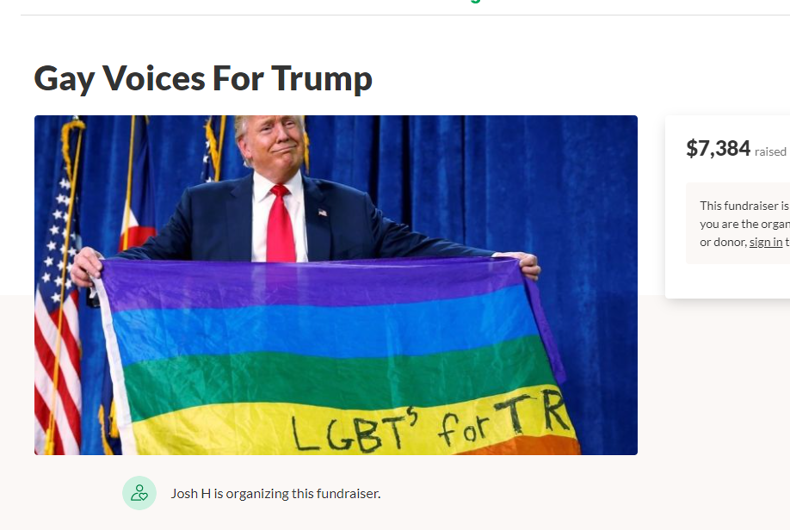 A screenshot of the "Gay Voices For Trump" GoFundMe that raised $7,384.Photo: Screenshot

A 21-year old bisexual Trump supporter has been revealed as the person behind several fake accounts that posed as conservatives, Democratic figures, and Trump family members on Twitter over the last year.

Using his fake accounts — mainly as Robert Trump, President Donald Trump’s now-late brother — to co-sign his own, he raised more than $7,000 to support a supposed “Gay Voices for Trump” voter outreach effort, that ultimately did not exist.

In 2016, Josh Hall was a 17-year-old high school senior from Pennsylvania, who had no interest in politics until Donald Trump ran for President. He “kind of thought he was like a clown at first,” but then he found that the more he heard the then-Presidential candidate talk, “I realized: Yeah, he says kind of off-the-wall things, but I do agree with what he’s saying.”

Hall went to college and chased a dream of becoming a radio talk host. Less than four years later, Hall couldn’t hold down a job.

He had come out as bisexual, but had also been accused of harassment by a “radical leftist” ex-partner, in his words. He began selling shirts that proclaimed “Josh Hall did nothing wrong” and even a GoFundMe fundraiser that supposedly went to support his legal funds. That earned him at least $815.

At the beginning of the year, with the coronavirus pandemic impending, he was working for DoorDash. He had self-published a how-to book detailing “38 essential rules to live life in order to be happy and successful,” but then, his original Twitter account was deactivated.

Hall decided, “What the hell, I’m just going to have fun now.” So, he decided to make money another way: posing as key political figures online.

Based on reporting by the New York Times, Hall started in February with Rod Blagojevich — the former Democratic governor of Illinois who was jailed for “selling” Barack Obama’s former U.S. Senate seat — after Trump granted clemency to Blagojevich and he was freed from jail. Hall, using an account with the handle @GovBlago, noted that the account was a “parody” in its biography, but would not do so for subsequent impersonations and messages.

“Anyone have a few bucks they can spare? I’m really struggling right now,” @GovBlago tweeted on April 1 – April Fool’s Day. Before its removal, the @GovBlago gained 26,000 followers.

From there, Hall would pretend to be Dr. Deborah Birx, the White House’s Coronavirus Response Coordinator for a short-lived stint. Then he began researching members of the Trump family that were not already online, and that’s when he began posing as Robert Trump.

First as @BigRobTrump and, after that account’s removal, @UncleRobTrump, Hall pushed QAnon conspiracies for months to a combined following of over 100,000 accounts. His most popular claims were that the late John F. Kennedy Jr. actually being alive and poised to replace Mike Pence as the Vice Presidential nominee, or that the coronavirus was the work of the Bill and Melinda Gates Foundation.

“It was unclear if Mr. Hall believed such lies or if he thought they were just good at attracting attention,” New York Times technology reporter Jack Nicas writes.

Hall then revived his “own” identity, becoming popular overnight as “@TheBiTrumpGuy” on Twitter and Parler (the latter where his profile remains up, with over 2,000 views on nearly every post in the last three months.) He used his impersonation accounts to promote himself as a “good friend and partner-in-crime” with Robert, and eventually, he went into fake “business” with him starting in July, on the supposedly “grassroots organization” Gay Voices for Trump.

“Uncle Rob runs Gay Voices For Trump with @TheBiTrumpGuy,” Hall tweeted from his Robert-impersonating account, “although I am very much a heterosexual male. It’s the Trump genes – we love women… but we are trying to reach out to LGBT and other minority voters. Josh is doing great work so please give him a follow and support him!”

From there, Hall went further to start a GoFundMe fundraiser, this time for “field organizing, events and merchandise” for LGBTQ Trump supporters. He used his fake account to direct message conservatives online, asking them for their financial support in the name of the President.

“Hey patriot,” the fake Robert said in one message, “would really appreciate if you have a couple of bucks to spare our organization.”

Hall admitted to the New York Times that Gay Voices for Trump never formally existed in any way, although he denied pocketing any money and claimed he helped register 100 people to vote. “I should have used better judgment and stuff. But I didn’t deliberately try and dupe people out of money,” Hall claimed.

He also said that the money raised – $7,384 in total – was still held by GoFundMe, but the company says that it was withdrawn by the organizer, ‘Josh H.,’ already.

But the fake accounts had another purpose: Asking for money.

He used them to promote his GoFundMe for “Gay Voices for Trump," a political group that — he admitted to me last week — doesn't exist. He brought in $7,384.

He told me he didn't take the money. GoFundMe said he did. pic.twitter.com/J50irMS19V

The real Robert Trump passed away, suffering “for several months” from a still-undisclosed illness, on August 15. From there, Hall’s impersonation of him fell apart. So, he moved on to other Trump family figures – Donald’s nephew, Fred Trump III; Maryanne Trump Barry, his sister and a federal judge who was revealed to be privately critical of her brother in August; and Barron Trump, the president’s 14-year old son. He continued pushing conspiracy theories, such as his claim (posing as Barron) that “COVID is a scam” and “Q[Anon] is real” to over 34,000 followers. All of those accounts were taken down within days of the election’s conclusion.

From there, Hall posed as Kamala Harris’ father, economist Donald Harris, writing that the Vice President-elect “is not who she portrays herself to be” and that “she is dangerous for our democracy.” When that didn’t catch on, he erased all the pertinent information and went back to the Trump family tree. This time, he pretended to be Donald’s more distant, private sister, Elizabeth Trump Grau, using the same account.

Trump Grau, who recently married, has not spoken publicly in nearly five years – but pretending to be her, Hall claimed “this election inspired me to break my silence,” supporting Donald’s allegations that election fraud had deprived him of victory. In under 24 hours, he had 20,000 followers, and soon one of his tweets prompted an article from Wayne Dupree’s conservative website.

That’s when he caught Donald’s eye. “Thank you Elizabeth,” he wrote in a tweet on November 20 sharing the article, “LOVE!”

“I’m a big Trump supporter, but I’m thinking, ‘He’s got to know that that’s a parody…’ How does he not know?” Hall wondered.

“I was like, ‘Oh, my goodness. He actually thinks it’s his sister,’” Hall recalled.

Since then, Hall claims he has “remorse” for how he duped people with disinformation and out of their money, but he says all of the accounts were clear parodies and believes he isn’t liable in any way.

Both Donald Trump and the White House have yet to comment officially on the matter.

I wrote about it. Then I got to work figuring out who was behind the fake.

Eventually it was pretty clear: a 21-year-old Trump supporter named Josh Hall. So I called him up — and he fessed up.

“I was like, ‘Oh, my goodness. He actually thinks it’s his sister,’” he recalled. pic.twitter.com/knwtmcBQqO

Josh told me he had remorse: “I should have used better judgment and stuff. But I didn’t deliberately try and dupe people out of money.”

He is another example, a la Steve Bannon, of a Trump fan who capitalized on Trumpmania to trick and profit off fellow Trump supporters.

Pete Buttigieg rumored to be nominated as next ambassador to China