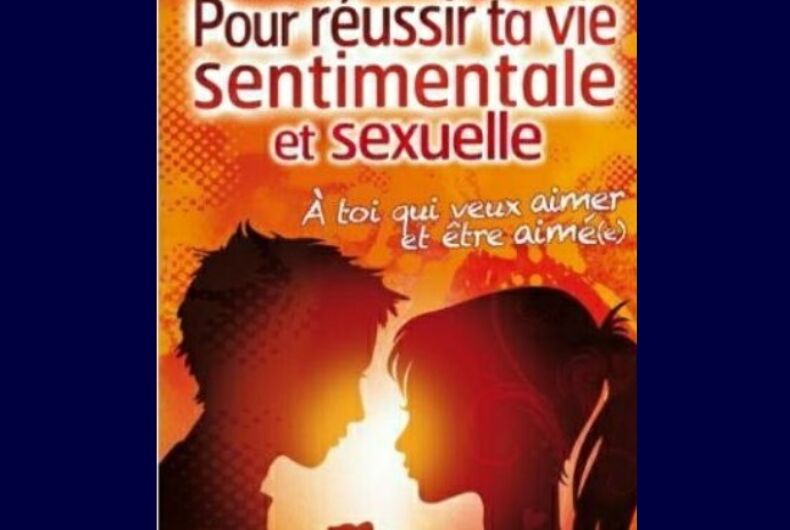 The cover of the book that tells teen girls that it's their fault if they get harassed by adult menPhoto: Screenshot/via Twitter

A student called out his school for making a book available that tells teens that having a mother with “excessive influence” can turn people gay and that girls who wear skirts are “inciting” men to harass them.

“Today, some people act like homosexuality is normal,” the book says. “However, sexual fulfillment is only possible with the otherness of a man/woman, and it’s both mental and physical.”

A student at Notre-Dame de Kerbertrand high school in Quimperlé in western France shared pictures of pages from the book on Facebook. The book is entitled How to Be Successful in your Love and Sexual Life by Father Jean-Benoît Casterman.

“Homosexuality is often the result of emotional development marked by an excessive influence of the mother during childhood or as a result of sexual child abuse by adults that induced an attraction to the same sex or a fear of the opposite sex,” Casterman wrote. “Homosexual tendencies are therefore not wanted and do not make a person happy. That’s why homosexual people deserve our sympathy.”

According to the French LGBTQ site Komitid, the book was first published in 2006 and the publisher’s website says that Casterman got support from the World Bank to write the book “in order to fight against AIDS in West Africa.”

The book, which has been spotted at several other Catholic schools in France, echoes the language of conversion therapy advocates, saying that teens who feel “homosexual tendencies” should realize that they are maybe just “homo-sensitive or homophile” but they should not “act on these feelings.”

“You are not defined by these tendencies, which are not irredeemable and can be overcome,” Casterman wrote.

He goes on to write, without any irony, that “this diversity” – as in, gender diversity within a relationship – “is a richness that’s difficult to erase.” Diversity of sexual orientation, though, is apparently easy to erase.

The book also says to “open yourself up to others” because gay and bi people tend to have “a great emotional or artistic sensitivity.”

“Discover the richness of the opposite sex and its beauty,” the book advises. “You surely have many qualities to share or discover,” adding that queer teens should “get past their fragility.”

“You’ll look like a frivolous and available girl. If someone tries to pick you up, it’s your problem,” Father Casterman states abruptly.

The page shows a picture of a girl wearing a skirt that stops just above her knees and long sleeves. “You can be stylish and a bit sexy,” the caption – written by an adult man for teen girls – says with a winking emoticon.

A school in the Paris suburb of Neuilly-sur-Seine handed out the same book in 2017. Students, parents, and teachers complained and the school’s director expressed their “deepest regrets.”

A police officer used a harmful gay stereotype to describe a protester. He received a suspension.