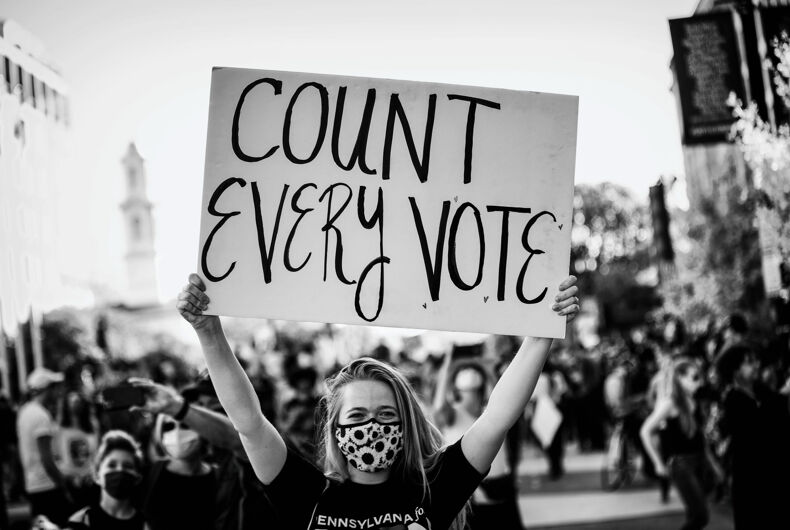 To the nation’s founders, the Electoral College was a good idea. They originally thought that Congress should choose the president, but decided that having each state decide who it wanted as President was a safer bet. If they had left it in the hands of Congress, it would have become (even more of) a hotbed of horse-trading. So, removing the Presidency from its purview provided one extra safeguard for the republic.

As with all things Trump touches, the Electoral College is a symbol of how the institutions and norms meant to protect democracy are weakened by this President.

Related: Trump would have won if LGBTQ people hadn’t turned out to vote for Joe Biden in swing states

If you didn’t know anything about the Electoral College at all, you’d possibly think it was a kind of ceremonial dinosaur, where party regulars in each state get to have the honor of saying they confirmed their state’s election results.

In fact, the College is an outdated artifact that increasingly thwarts the will of voters nationally.

The past two Republican presidents, Trump and George W. Bush, came into office having lost the popular vote. In Trump’s case, it wasn’t even close: 3 million votes — but, because the Electoral College is what decides the election constitutionally, not the overall number of votes cast, both were able to assume office.

Both with terrible results, particularly on LGBTQ rights.

The fact that this year’s presidential election results were uncertain for days is entirely due to the Electoral College. Even though Biden’s overall margin of victory was, for most of the extended counting period, in the millions — and eventually hit seven million — everything hinged on the results from just a handful of states, mostly in the Midwest or South. Until those results were finalized, the election wasn’t over.

What that means, ultimately, is that some votes matter more than others. If you lived in a reliably blue state, like California, or a reliably red one, like Alabama, your vote counted for less than someone in suburban Wisconsin, a swing state. Presidential campaigns are structured not around winning the most votes, but on winning the most votes in certain states.

Generally, the popular vote has been a boon for Republicans, and they are repeatedly rejected at a national level, but manage to work the system at the state level. The GOP doesn’t have to be the party of the majority of American, and in fact has made every effort not to be.

Everyone let out a collective sigh when Biden racked up enough states to make his margin indisputable, making Trump’s efforts to overturn the election laughable — but that was closer to becoming reality than most people realize. If the results had only come down to one or two states, Trump may have been able to exert enough pressure to throw out those results. The judiciary, including the Supreme Court, might have been more amenable to grant Trump his wishes if they had to hear litigation in the matter.

With the results being clear, there simply were too many states where Trump disputed results, with too many conflicting or disingenuous arguments, for the courts to support them. If it had come down to just one state, as Florida did in 2000, the Supreme Court may have been a lot more open to handing the election to Trump, no matter what the votes were.

We’ve passed the point where the Electoral College results can be challenged this year. By December 8, most states had certified their results. When the College electors cast their ballots on December 14, Biden will be the next president. The next Congress will sit to certify those results on January 6.

All that will remain is Trump’s lies about the election, the bottom-tier legal team he’s relying on to keep his would-be coup afloat, and the damage he has done to the nation’s faith in fair elections.