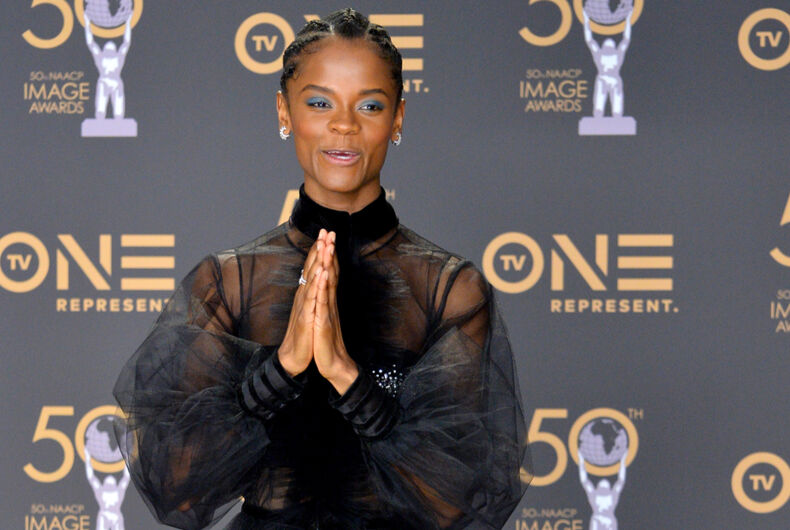 The video, created by brothers Tomi and Tobi Arayomi, is a rambling mess combing COVID, transgender people, vaccines and climate change. It has since been removed from YouTube for spreading debunked coronavirus misinformation.

Related: Has the breakthrough of ‘Black Panther’ created an opening for a queer superhero?

Tomi Arayomi hosts the video and claims at one point that he hopes any potential vaccine for the coronavirus doesn’t “make extra limbs grow.” He admits he doesn’t “understand vaccines medically.”

Arayomi offensively tried to use transgender people to explain why he didn’t believe in the science behind the pandemic.

After fans started to express disappointment that the actor would spread transphobia and misinformation about a deadly disease, Wright blew them off and started complaining about the so-called cancel culture, before making excuses about why she did it.

“If you don’t conform to popular opinions, but ask questions and think for yourself,” she tweeted, “you get cancelled.”

“My intention was not to hurt anyone,” she said in a follow-up tweet. “My ONLY intention of posting the video was it raised my concerns with what the vaccine contains and what we are putting in our bodies. Nothing else.”

“That video was transphobic and no please don’t be an antivaxxer it’s NOT okay,” one user responded.

if you don’t conform to popular opinions. but ask questions and think for yourself….you get cancelled 😂

my intention was not to hurt anyone, my ONLY intention of posting the video was it raised my concerns with what the vaccine contains and what we are putting in our bodies.

…when scientists, more informed and educated than most of us, are saying this vaccine is ready, we need to be willing to get vaccinated so this pandemic can come to an end.

To doubt science because of a contrarian conspiratorial YouTube video is very dangerous.

👏👏👏 no room for transphobes in the MCU, or in life in general. She needs to be recast. 💁‍♀️ she has not only doubled down on these toxic views but also refuses to take responsibility for herself.

Note to self- Don't use "evidence" from bigoted people to "raise concerns" about a topic. If the point I want to be making can't be done another way, then my evidence isn't strong enough and that I don't need to be the one sounding the alarm.

Exactly. It's like internalized racism this is the same for transphobia

instead of justifying yourself you could…apologize you know?? I think many of the people who follow you have been affected by the virus or have lost someone because of it and that video is so disrespectful and transphobic