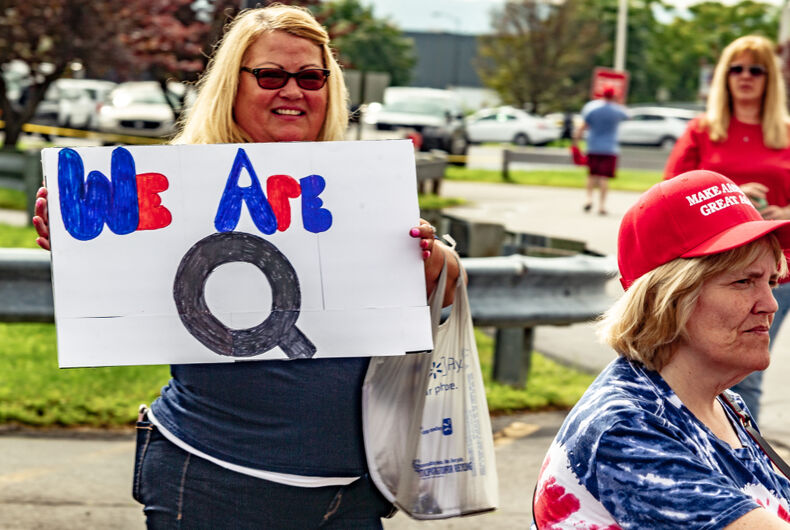 WILKES-BARRE, PA - AUGUST 2, 2018: A woman holds a "We Are Q" sign while in line to attend the "Make America Great Again" rally held at the Mohegan Sun Arena.Photo: Shutterstock

Will Donald Trump’s supporters end up doing what decades of activism and Democratic dithering have failed to accomplish? Will QAnon conspiracy believers had LGBTQ civil rights protections?

While Senate Majority Leader Mitch McConnell (R-KY) has vowed to make life as difficult as possible for President-elect Joe Biden, whether killing crucial legislation or refusing to confirm Cabinet and other high-level nominees, it will only work if Republicans keep control of the Senate.

With two Senate seats still up for grabs in Georgia, the upcoming runoff election in that state will decide the balance of power. The runoff election, for two seats currently held by the GOP, happens two weeks before Biden’s inauguration.

After the recent election, Republicans have 50 seats in the chamber and Democrats control 48. They will need to capture both of the seats to create a tie, allowing Vice President-elect Kamala Harris to cast the tie-breaking vote.

Trump supporters and QAnon believers, however, are still stinging from the president’s loss and falsely claiming that Biden won because Democrats “cheated.” Even after dozens of court cases in Pennsylvania, Michigan, and Georgia were filed by the Trump campaign and supporters, no evidence of voter fraud has been found.

More Republican politicians are calling on the president to finally concede and while the campaign continues to frantically dispute results, Georgia’s Republican governor and secretary of state certified that Biden defeated Trump in the Peach State.

Now angry supporters of the president are taking to social media and vowing “revenge” on the Republicans they say have betrayed them. The conspiracy theory, repeated by Trump, claims that a shadowy cabal of entrenched government officials that normally secretly pull the levers of power, the “Deep State,” has opposed Trump’s presidency to preserve their own nefarious plans.

Republicans who are acknowledging reality, however, aren’t welcome among the conspiracy theory crowd. So now they’re vowing to sit out the Georgia election as retribution to the “Deep State” officials certifying the election. If Trump supporters boycott the ballot box, handing Democrats the seats in the Senate, Democrats would control both houses of Congress and the presidency.

Democrats have promised to make LGBTQ equality a priority in the upcoming administration. If they win control of the Senate, Biden has repeatedly stated he would sign the Equality Act – a bill to add sexual orientation and gender identity as protected categories in federal civil rights legislation – during his first days in office.

By sitting out the election, Trump supporters, white nationalists, and QAnon conspiracy believers who spent the past four years opposing the equality of their fellow Americans could inadvertently advance civil rights protections for the LGBTQ community.

Pete Buttigieg will not be the ambassador to the UN. Will he end up at Veterans Affairs?

Trans women dropkicked & beat a racist throwing slurs at them. The judge said he deserved it.