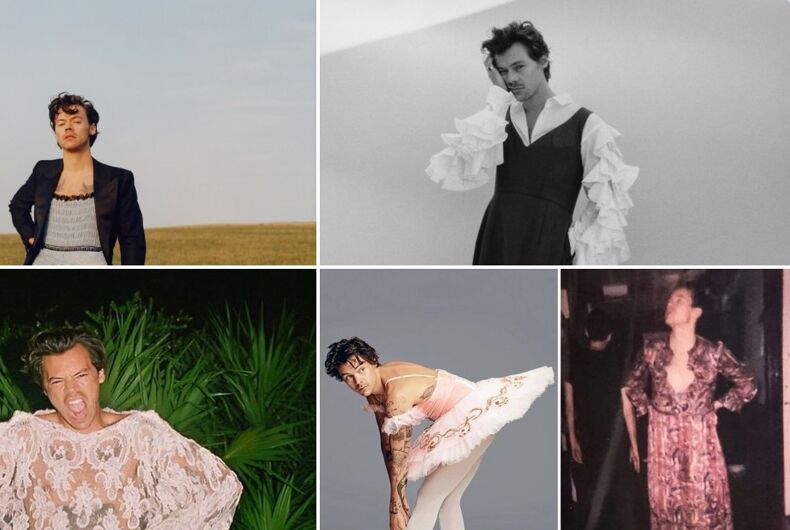 Black conservative pundit Candace Owens said something on social media. While this may not seem like an unusual turn of events, this time she’s managed to pull off a rarely performed feat.

She has managed to anger most of the internet after she demeaned pop star Harry Styles on Twitter.

Owens took umbrage that Styles wore dresses along with more traditionally masculine clothing in a Vogue photoshoot. Styles is the first man to appear alone on the cover of the venerable fashion magazine.

In between rants about Antifa and non-existent voter fraud, Owens took a swipe at Styles, tweeting that it’s time to “bring back manly men” along with a link to the article.

“There is no society that can survive without strong men. The East knows this. In the west, the steady feminization of our men at the same time that Marxism is being taught to our children is not a coincidence,” she sent. “It is an outright attack.”

There is no society that can survive without strong men. The East knows this. In the west, the steady feminization of our men at the same time that Marxism is being taught to our children is not a coincidence.
It is an outright attack.

After the blow-back started, other conservatives started defending Owens and she took to Twitter to defiantly explain herself.

“I think with music it’s so important to evolve — and that extends to clothes and videos and all that stuff,” Styles says in the interview. “That’s why you look back at David Bowie with Ziggy Stardust or the Beatles and their different eras — that fearlessness is super inspiring.”

When people pointed out that Styles was simply continuing a long tradition of male pop stars who have embraced gender fluidity, Owens claimed that people were somehow trying to force her to have sex with a gender-bending pop star.

And that’s when the internet hit peak outrage.

But as the fight over whether or not men can wear fabric cut and sewn in certain ways, one tweet has won the battle with a solid dose of common sense – and shade. Because that’s when Chasten Buttigieg stepped into the arena.

Since I’m trending I’d like to clarify what I meant when I said “bring back manly men”.

I meant: Bring back manly men.

I’m impervious to woke culture. Showing me 50 examples of something won’t make it any less stupid.#BringBackManlyMen https://t.co/7NKrrGiZSf

I like how a bunch of people who think that old white dudes in tights and long wigs were the greatest thing since meat on a stick, but Harry Styles looking bad ass in a dress has their knickers in a wad.

So, in today's edition of "People Are Really Pissed" some folks can't wrap their minds around Harry Styles simply wearing a dress.

Oh honey, it's just fabric! People are dying in the world and these folks are mad about fabric. Jesus be an almighty wall.

Still laughing at the patently unfuckable men who are big mad that Harry Styles is confident in his sexuality.

Love love love this @Harry_Styles @voguemagazine spread. I remember when some said I played into “heteronormativity” by wearing chinos in @TIME. Honestly, what can you wear these days? Oh yeah. That’s right. Anything you damn well please.