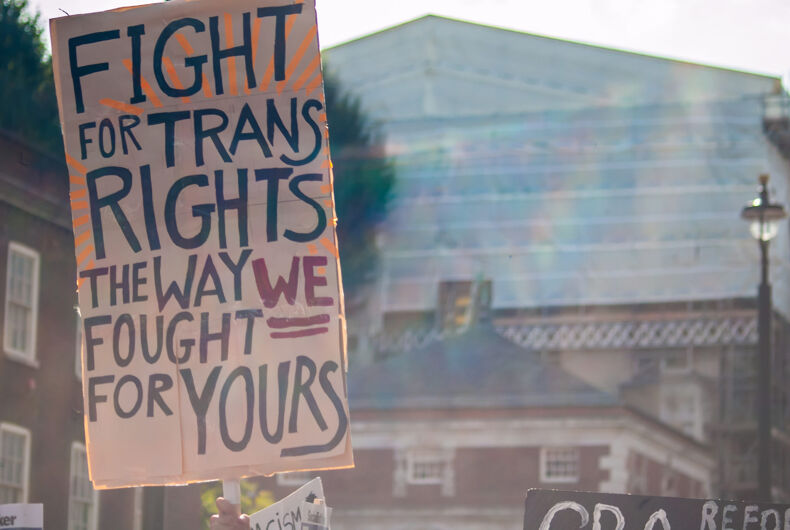 I have written frequently about anti-trans discrimination – and specifically about discrimination that has been directed at us from within the LGB community. That tends to make me unpopular among those who are able to profit from imagined progress toward acceptance.

But, I write about it because I’ve experienced quite a lot of discrimination personally.  One thing I’ve been incredibly fortunate to avoid experiencing directly, though, is physical anti-trans violence. There were two instances in which I felt that my luck, often with the substantive integrity of Swiss cheese, had run out.

One turned out to be purely in my cynical imagination.  The other was all too real.

The first instance was in the spring of 1999. The Brandon Teena Story documentary was out, and the dramatized version in Boys Don’t Cry was soon to come.

I was driving north to a job interview, and I thought that I’d take a small detour to get a personal glimpse of Falls City, Nebraska. I felt queasy even driving into town – yes, the murders took place in Humboldt, but the trials were held in Falls City.

Driving around for just a few minutes left me wondering whether I’d made a mistake.  I didn’t interact with anyone there and, in retrospect, it seems unlikely anyone there even noticed me — but I couldn’t help but notice the degree to which it was an economic wasteland. What sort of future could anyone there expect? Yes, Brandon deserved a future, but would he have had one he deserved there?

I left, quickly heading back toward I-29 that points north, and didn’t hesitate for a moment.

(As for the job interview? It didn’t work out, but it led directly to the one that did, so it was still worthwhile.)

I had not yet transitioned. I was on a study abroad in northern England. I had gotten to know a Londoner via the main trans chat room on AOL that suggested we try to cross paths in person while I was on her side of the Atlantic.  A three-day weekend and a BritRail pass made a trip to London a reality.

Tina Turner was headlining at old Wembley Stadium that weekend, but my friend and I opted for a night at the Way Out Club. What I’d like to remember about the evening is just that it was a lovely night on the town, when I had first heard my favorite Blur song, “Parklife.”

Instead, I remember this more. At some point we encountered a very inebriated fellow who was questioning his sexuality (among other things probably).  Picture if you will, Homer Simpson with slightly more hair, a slightly-less-white cheap short-sleeved shirt and an accent of unknown provenance. “I’m not gay! I’m not gay!” he kept repeating.

Over the course of the very long evening at the club, we drifted away from Homer. Around 4 a.m. though, we were waiting outside the club for our cab to arrive when a couple (cis hetero I’ve always presumed) walked by.  Self-licensed inquisitors, they felt empowered to ask us what we were.  What we did was ignore them – which gradually enraged the male.

“Do you know who I am?” he felt empowered to ask of us.  (Pro-tip: If you ever feel the urge to use that phrase, just don’t.  No good can ever come of it – even if the person you’re hurling it toward, by some objective standard, really should know).

A quarter-century after the fact, I still don’t know who the young, physically fit guy was. In the moment, I assumed he was some low-level soccer personage (London has, what? Two dozen or so teams?).  But my friend – apart from being a local – was far more up to speed on that sport than I then was, so if he actually was anybody, she’d have actually known who he was and she never indicated to me that she did.

Well, eventually these events outside the club attracted the attention of folks who were still inside.

Club patrons began gathering on the plaza by the entrance and began somewhat angrily – yet non-violently – responding.  It seemed clear that they didn’t know who he was either, though I couldn’t quite make out what they were saying.

After one emphatic “Do you know who I am?”, the crowd parted, Cecil B. DeMille-like (or at least, that’s how I now recall it now) and through it emerged Homer – not with an answer to that question, but with a question of his own and its answer.

“Well, do you know who I am?” he loudly slobbered.  “I am the president of the United States! And I demand that you unhand these ladies!”

This was the point where I thought my life was moments, if not seconds, away from ending.  Now, the guy did not have his hands on either of us (he never did, in fact), but if there ever language custom-made to escalate tensions, that was it.

But just then, in a coincidence of timing that I’m sure no one reading this will believe, our taxi arrived.  We hopped in and the driver spirited us away – me back to my hotel and my friend back to her middle-class existence.

Back in Boston… Rita Hester had a little more than two years left to live.

Because of Homer, I can laugh about the time I was on the short end of a hate crime.

Most of us aren’t that lucky.

Surprise! One of Trump’s legal eagles is a raving anti-LGBTQ activist