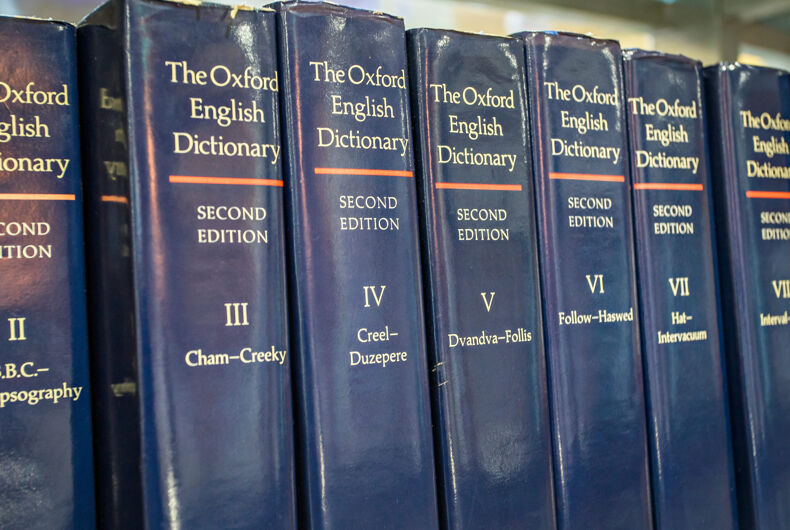 The Oxford University Press has updated its definition of the word “woman” to be more inclusive of LGBTQ people and less sexist after an online petition called out the publisher for sexism. The changes will apply to the Oxford English Dictionary and the publisher’s other dictionaries.

Related: Dictionary.com just added a lot of LGBTQ words but will use “homosexuality” less

The publisher also updated the entry for “man” to reflect that men can have partners of any gender.

Additionally, the publisher has labeled some of its synonyms for “woman” — such as “bitch”, “piece”, “baggage”, “wench”, and “filly” — as offensive or derogatory.

The publisher will also revise some of its dictionaries’ sample sentences illustrating the use of “woman” which petitioners found sexist. Some examples of these sentences include the following: “I told you to be home when I get home, little woman”, “Ms. September will embody the professional, intelligent yet sexy career woman”, and “If that does not work, they can become women of the streets.”

“These examples show women as sex objects, subordinate, and/or an irritation to men.” wrote women’s rights advocate Maria Beatrice Giovanardi in her petition, which launched in July 2019.

Giovanardi called the changes “a huge step forward for the LGBTQI people,” adding, “It is respecting their love and unions.”

In a statement, the publisher said its dictionaries “reflect rather than dictate, how language is used.”

“This independent editorial approach means that our dictionaries provide an accurate representation of language, even where it means recording senses and example uses of words that are offensive or derogatory, and which we wouldn’t necessarily employ ourselves,” a spokesperson for the publisher told The Guardian.

Nevertheless, Giovanardi still takes issue with the dictionary listing derogatory terms like “bitch” as synonyms for women, even if they’re labeled as derogatory.

She said that “d*ckhead”, a word defined as “a stupid, irritating, or ridiculous man,” isn’t included in the list of synonyms for men, revealing a continuing double standard and willingness to abuse women in the English language.