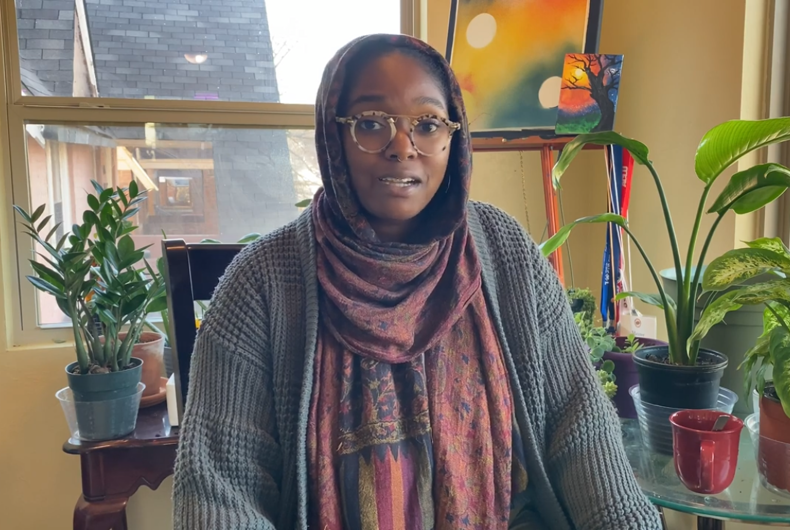 Mauree Turner has defeated Kelly Barlean in the election for the Oklahoma House of Representatives seat tonight.

Turner, a 27 year old non-binary activist, beat Barlean, a conservative retired attorney, with approximately 71 percent of the vote, the New York Times reports. So far, 96 percent of precincts have reported. They will represent the 88th District, which encompasses the heart of Oklahoma City.

Turner is the first Muslim person elected in Sooner State history. They are also the first openly non-binary person ever elected to a state legislature in the United States, according to the LGBTQ Victory Fund.

“I’m grateful for HD88 granting me this opportunity… I’m ready to fight hard as hell,” they wrote in a tweet, noting their disappointment that a statewide ballot measure, SQ805, fell through. SQ805 would have prohibited non-violent felony convicts from receiving greater sentences when they are convicted of non-violent felonies again.

Criminal justice reform is a key issue in Turner’s life, not just their campaign – their father converted to Islam while in prison.

Turner currently works as a Field Director for the ACLU, having previous experience organizing at the NAACP of Oklahoma, Freedom Oklahoma, and Council on American-Islamic Relations (CAIR) Oklahoma.

They were endorsed by the Victory Fund, the Run for Something organization, Pete Buttigieg’s Win The Era, Emily’s List, Planned Parenthood, Sen. Elizabeth Warren and Rep. Ilhan Omar, among other organizations and individuals.

Turner inherits a district that is 70 percent white and 10 percent Black, but they expect to relate to the 37,000-plus constituents.

“Growing up as a Black Muslim-American Queer Womxn, in Oklahoma of all places, I shared the collective experience of not being seen or heard by the folks that make laws about our lives,” they said according to CAIR Oklahoma.

In June, Turner defeated incumbent Rep. Jason Dunnington in the Democratic primary. Dunnington held the seat for six years prior.

Before Dunnington, two out LGBTQ people sat in the 88th District seat. Al McAffrey served from 2007 to 2012 as the first gay person in the state’s legislature, and lesbian Kay Floyd, from 2012 to 2014.

“Of all the states to achieve a milestone political moment for non-binary people, few would have thought it would be Oklahoma, where there are so few LGBTQ elected officials,” Annise Parker, the President & CEO of the Victory Fund, said in a statement. “But Mauree ran a tireless campaign focused on the issues that matter to their district while also being authentic and open about who they are.

The Victory Fund says that a “historic number of genderqueer and non-binary people” – 17 – ran for office in 2020. Only four ran in elections in 2018.

Turner’s preferred pronouns are they, followed in preference by she.

I have a lot of feelings about tonight. But overall, I'm grateful for HD88 granting me this opportunity. I hate SQ805 & so many other things slipped through our fingers… But I'm ready to fight hard as hell so they never do again.

Nothing About Us Without Us
Let's go get 'em 88 pic.twitter.com/Y059G30Mbw