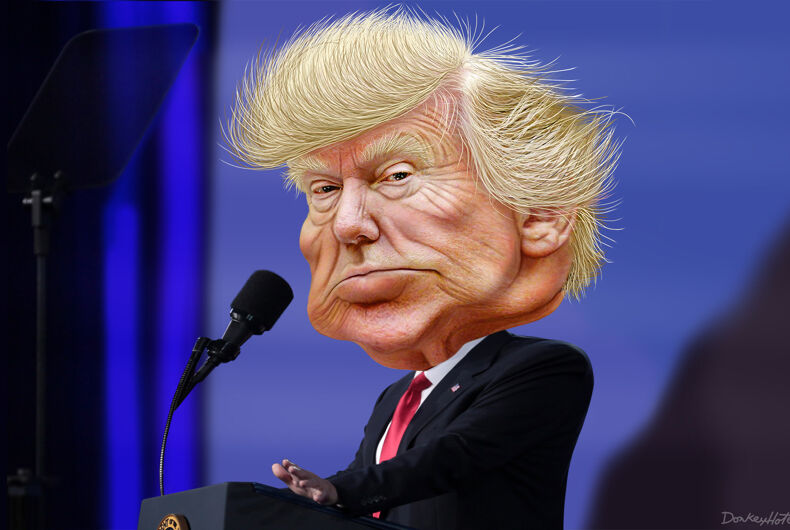 “Barack Obama, Born in Kenya and Is Illegitimate President.” “Alien Caravan Heading Toward Southern Border.” “Joe and Hunter Biden Controlled by Ukrainian Oligarchs.” “Deep-State Out to Take Down Trump.”

Related: Trump’s 2016 victory wasn’t a fluke. Here’s how to keep it from happening again.

These headlines could easily come from 60-point bold typeface from the cover of any supermarket tabloid. But no, the manufactured conspiracy theories and invective come directly from the thumbs and lips of the current Commander-In-Chief on the White House toilet.

What makes this worse is that Trump’s mishigas are picked up (sometimes even manufactured) and amplified by his state-sponsored media, Fox “News,” Sinclair, Breitbart, The Drudge Report, and several others – plus the increasingly viewed QAnon propagandist.

It is simply too easy comparing Trumpism to the dangerous post-World War II McCarthyism, when a young and brash Wisconsin Senator Joseph McCarthy raised high his gaslight to accuse alleged communists and homosexuals beneath every governmental pillar.

Ancient Greek philosopher and pedagogue, Socrates, declared that “the unexamined life is not worth living.” This dictum relates not only to individuals examining themselves, but correlates to societies who fail to critically evaluate (or examine) the words and actions of their leaders, and in particular, those whom they elect supposedly to honestly and diligently represent their interests.

When anyone in positions of power violently rip children away from parents who are attempting to make a better life for their families, we the people must examine and intervene by speaking out to end the atrocities.

When anyone in positions of power fails miserably to prepare for an impending viral pandemic and continually spreads lies by downplaying its seriousness, we the people must examine and intervene by demanding truth and leadership from the scientific experts in the field.

According to The Washington Post, by July 9, 2020, Donald John Trump uttered 20,000 verifiable lies or misstatements since taking office on January 20, 2017.

At the second and final Presidential debate on October 22, 2020, Trump’s mouth poured out a virtual tsunami of deceit and treachery flooding into the hall and over the airwaves. For example, according to Trump, “we have done an incredible job environmentally, we have the cleanest air, the cleanest water, and the best carbon emission standards that we’ve seen in many, many years.”

Well, Donald, tell that to the estimated 2 million U.S. residents, primarily people of color, who have limited or no access to clean water and sanitation.

Anyone can “examine” the Trump regime’s actions against the environment and in favor of corporations to destroy the environment by eliminating 23 environmental protections in law, including the National Environmental Policy Act, the Endangered Species Act, and the Clean Water Act.

What the Frack has Trump done to our country and to the Earth’s environment?

Another of Trump’s debate lies comes regarding immigrant children he dumped into cages. “They are so well taken care of,” he asserted. “They’re in facilities that were so clean.”

This is blatant lie. Children were ripped from the arms of their vulnerable and frightened parents, and put into chain link cages as if they were chicken going to slaughter. They were forced to lay on damp concrete floors with only Mylar blankets to cover them. The U.S. government has been unable to locate the parents of an estimated 666 children, a higher number than the previously reported 545, thus making them virtual orphans.

After examining ourselves and our society, it is obvious that Joe Biden’s election will bring an end to the constant tsunami of lies and these harrowing 23-day weeks, among other things. With two more Senate seats up for grabs to complete the ‘blue wave’, we have the possibility to cleanse the country from the past four years of Trumpism.

Even Ann Coulter is elated that Trump has lost — “A second term of Trump would have killed us,” she admits — but not without calling for “Trumpism without Trump” from the right moving forward.

I fear, however, our PTSD – Post Trump Stress Disorder – will linger for many decades.

Donald Trump still refuses to concede. His petulance only amplifies his impending demise.