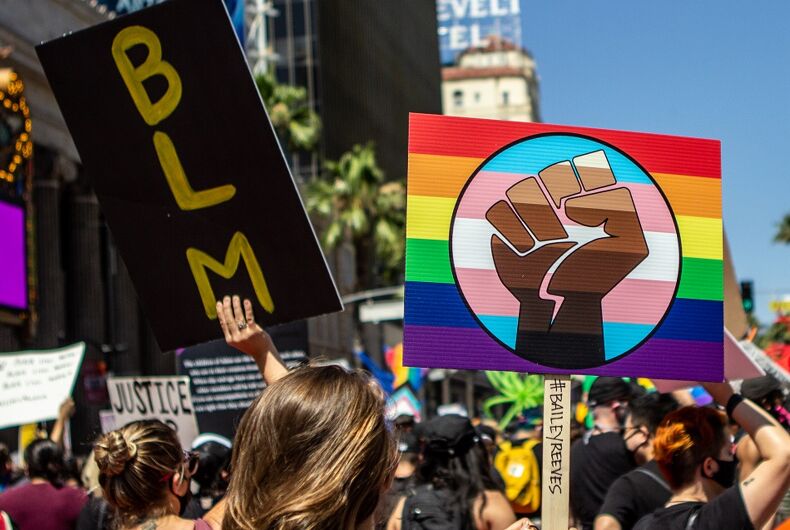 June 14, 2020: Protesters hold BLM and a rainbow fist sign at the All Black Lives Matter march in HollywoodPhoto: Shutterstock

Joe Biden isn’t the presidential candidate of most leftist’s dreams. Especially not Ariana, a young bisexual Black woman who’s struggled emotionally with committing to the only option to oust Donald Trump.

Today she’ll decide. “I’ll probably vote,” she says. “Then I’m probably going to throw up when I’m done, and feel horrible about it.”

The Atlanta resident is tired of voting for the “lesser of two evils.” It’s why she opted out of early voting and has waited until today to make her choice.

“I feel like we, as a country, can’t keep deferring to that argument. At some point we are going to need much more radical change,” she says. “Because we’ve been doing the exact same thing in the exact same system and having the same horrible results.”

Local elections are a priority for her: she wants the district attorney in her county gone. Also in Georgia there’s a chance that Democrats could wrest control of the state senate from Republicans.

The presidential election, though, presents a problem not only for Ariana, but many other leftist LGBTQ folks.

“Yes, Trump is more right-wing, but Biden isn’t a leftist, either, not by any means,” Ariana says. “He’s a centrist who just tries to pander to everyone who would possibly give him a vote.”

Another Atlanta resident, 43-year-old Asha, has accepted the ethical conflict of the alternative. She cast her vote for Biden early.

“As radical queer living in the South,” she says, “I don’t expect presidential candidates to reflect my life, identity, nor values.”

“I don’t feel particularly passionate about [Biden]. I’ve just cast my vote as a much better option than the current evil which is in office.”

For some voters, a strategy for Biden that stresses that he’s Trump is its own problem: the focus is on who Biden isn’t, rather than who he is and what his policy stances really are, Ariana says.

Additionally, the baggage Sen. Kamala Harris carries is concerning for Ariana. As a Black woman, she says, to have a woman of color as vice president would be incredible. But Harris’s tenure as the District Attorney of San Francisco presents many problems.

“She has done everything she can to give policing more power, not serving the people in any way whatsoever,” Ariana says. “Just recently she has started going back on things that she has preached before, saying the status quo is to have all these cops and we don’t need that and now it’s unnecessary. She saw [the reaction to the killing of] George Floyd and was like, ‘Time for me to change my tune or no one’s going to want me.’”

Asha, born in New Zealand and mixed-race South Asian, Irish, and Chinese, is similarly torn in wanting to support Harris.

In the 2016 elections, Ariana voted third-party and she regrets it, despite her strong dislike of Clinton. But she’s also concerned that, in the future, she’ll be overcome by shame for having voted for a candidate she adamantly does not believe in.

“I don’t want to have to say I had to pick the lesser of two evils,” she says. “That’s not what I would want to model for the people around me.”

She’ll be voting for other offices, definitely – but Ariana won’t know if she’ll cast a ballot for president until she arrives at her polling place.

“We’ll just kind of see how I feel when I roll in,” she says.